New Delhi: As Delhi re-opens, cars are back on the road, construction is restarting, factories are reopening, and air pollution--which had fallen to half the usual levels at this time of the year--is back on the rise. The gains from the COVID-19 lockdown are unlikely to last and air pollution will eventually return to the city’s usual high levels. Any long-term sustained reduction in air pollution will require widespread policy changes, experts told IndiaSpend.

“There is nothing to celebrate. These are mechanical improvements in air quality that do not reflect structural change, and will go away once activities resume,” said Santosh Harish, fellow at the Centre for Policy Research.

New measures to tackle pollution will require widespread change and may face resistance from the public. “All the soft options are over. Future measures will be more difficult and inconvenient--restraining use of personal vehicles and promoting public transport requires behavioural change,” said Anumita Roychowdhury, executive director of research and advocacy at the Centre for Science and Environment (CSE).

Delhi has long ranked as one of the world’s worst polluted cities. In November 2019, the Delhi government declared a health emergency when the city recorded a PM 2.5 concentration of 625 microgram per cubic metre (μg/m3) of air, 24 times the safe limits prescribed by the World Health Organization (WHO). Exposure to such high levels of air pollution has been linked to lung cancer, cardiovascular disease, respiratory illness, and infertility. Annually, air pollution accounts for 1.24 million or 12.5% of total deaths in India.

Delhi’s air pollution problem may have contributed to exacerbating the COVID-19 toll in the city. Long-term exposure to PM 2.5 and NO2 may increase COVID-19 mortality. Particulate matter may harbour the SARS-CoV-2 virus, which causes COVID-19, increasing its persistence in the air and fuelling spread.

The first three phases of the national lockdown, which started on March 25, drove large declines in air pollution in Delhi. In April 2020, the concentration of PM 10--which refers to airborne particulate matter less than 10 micrometre in diameter or seven times finer than human hair--fell to 71.7 μg/m3, less than half the concentration observed during the same month over the previous three years.

The concentration of PM 10 rose to 96.4 μg/m3 during the fourth phase of the lockdown, which expanded exemptions and permitted interstate movement starting May 18. From June 1, the fifth phase further allowed offices, industries and construction sites to operate across the National Capital Region (NCR). PM 10 concentration has averaged at 78 μg/m3 during June so far, still considered “good” as per the national Air Quality Index (AQI).

Concentration of pollutants in Delhi over 2017-2020

The concentration of PM 2.5--particulate matter that is four times finer than PM 10 and capable of penetrating deep into the respiratory system--has also followed a similar trajectory. It was 31% lower than usual levels during the first three phases of the lockdown at 110.1 μg/m3. It rose to 122.1 μg/m3 during the fourth and fifth phases, “very poor” conditions under the AQI.

The drop in pollutants is due to the suspension of their source activities and not driven by fundamental changes in the economy. Particulate matter in Delhi is caused by construction, factories and traffic, all of which ground to a halt during the lockdown. Nitrogen dioxide (NO2) emissions, which have fallen by 48% in June compared to previous years, are driven by transportation. Mobility for retail and work areas has fallen by 62% and 48%, based on data collected by Google Maps.

In contrast, sulphur dioxide (SO2), carbon monoxide (CO) and ground-level ozone (O3) concentrations have been in line with those observed in previous years. SO2 emissions in Delhi are associated with coal-burning power plants, which have continued to operate. CO is a result of incomplete burning of fuels and persists in the atmosphere for a long-time. O3, a secondary pollutant, is formed when nitrous oxides such as NO2, which are emitted by transport-related sources, are exposed to sunlight.

Change in Mobility in Delhi During 2020 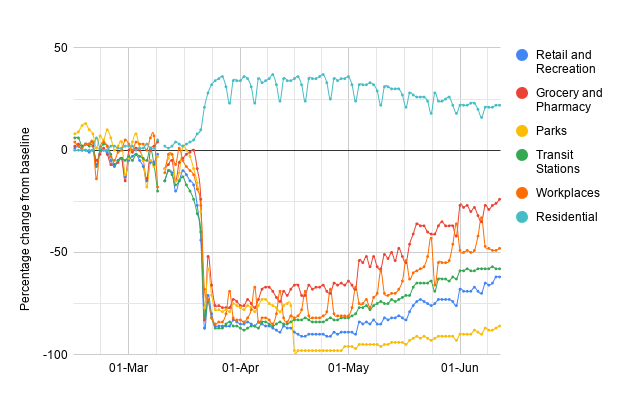 Delhi’s air pollution trajectory has followed trends across the world. NO2 levels in countries affected by COVID-19 fell by 60% in early 2020, but have since been rising as lockdowns ease. In China, PM 2.5 and NO2 concentrations fell by 30% in March but have now returned to usual levels. CO2 emissions have fluctuated similarly.

“Right now the weather is nice, with high winds and some rains. After this, we will start to see the build up of pollution,” said Sarath Guttikunda, director of UrbanEmissions, a platform for monitoring and research on air pollution data.

Over the last two decades, Delhi has incrementally adopted measures to alleviate air pollution--it transitioned the public bus fleet to using compressed natural gas (CNG) instead of diesel, closed coal plants in city limits, banned industries from using dirty fuels, diverted polluting traffic via bypasses, and devised an emergency response plan to curb episodic spurts in pollution. “Due to these actions, we have seen a 25% reduction in particulate matter in the city but we still need a further 65% reduction to meet clean air standards,” Roychowdhury said.

The lockdown has created a unique situation by giving the city a glimpse into a clean air future. “After a long time, the city has collectively experienced blue skies,” said Roychowdhury. She is hopeful that this will create a stake in retaining the gains from the lockdown.

Air pollution has only recently become a politically salient issue in Delhi, entering party manifestos in the February 2020 assembly elections. The public too does not associate air pollution with health risks, noted Disha Sharma, a postdoctoral researcher at Princeton University. “People didn’t wear masks during the years of bad pollution, it took something as serious as COVID-19 to elicit this reaction,” she said. “To sustain public engagement the messaging needs to be adapted accordingly. We should focus on how air pollution worsens such infections,” Harish added.

Political and public buy-in can help drive structural changes that have long been demanded by policy advocates. In June 2020, environmental activists called on the government to implement Bharat Stage-VI standards across heavy vehicles, apply goods and services tax to natural gas, incentivise walking and cycling, and invest in public transport through the financial stimulus.

Policy changes demand large-scale behavioural changes in the public and would be difficult to realise in any situation. With an ongoing pandemic and ailing economy, their implementation poses further challenges.

“In the coming months, the focus will be on economic recovery and we may see a dilution of our goals towards air pollution. This has already begun to happen with the government opening bidding for coal blocks,” said Sharma. The auction of 41 coal blocks for commercial mining activity was announced under India’s economic stimulus package, which has been ranked the fifth worst on a global environment index.

The dilution of environmental regulation in the name of economic growth may also accelerate. In March 2020, the Ministry of Environment, Forest and Climate Change (MoEFCC) released a draft of the environment impact assessment (EIA) notification, which would allow projects to gain environment clearances after their commencement, reducing oversight. In May 2020, MoEFCC also diluted requirements for coal washing and limits on ash content of coal for thermal power plants, noted Harish.

Local approaches centred on public transportation may also face obstacles in a post-pandemic world. Commuters may hesitate to adopt public transport as concerns about social distancing linger. “Used cars are already seeing an increase in sales,” said Harish, “I don’t expect to see a large number of people moving away from public transport, but those who can afford to do so, will, and then may get locked into using personal vehicles.”

Though vehicle ownership may increase in the short-term, attitudes towards walking, cycling and public transport will improve in the long-run, found a report by CSE. Some cities are already thinking about ways to incentivise green mobility post-lockdown--European cities including Paris, Milan and Madrid, are undertaking ambitious projects to pedestrianise roads and increase bike lanes.

But even if localised policy changes are successful, they may not significantly impact air quality if surrounding areas continue to pollute. “Pollution does not follow political boundaries,” noted Roychowdhury, “clean energy transitions have to happen across NCR to reduce pollution in the airshed.” Broad-based policy measures are especially important to control episodic spurts due to seasonal crop burning and reduce emissions from remaining coal plants in NCR.

“Not all is doom and gloom,” said Harish. The lockdown has created opportunities to advance environmental thinking. “People are now used to the idea of work from home, which is a behavioural shift that otherwise may not have happened so quickly,” he noted. Working from home will likely curb unnecessary travel and commuting, reducing emissions and congestion.

During the lockdown, the PM Garib Kalyan Yojana also provided free LPG to all Ujjwala beneficiaries for three months, replacing dirty fuels and reducing indoor air pollution, which leads to 3.8 million premature deaths annually around the world. “Hopefully this provision can be sustained,” said Harish.

Roychowdhury is optimistic: “I have seen how public awareness levels have changed. When we started 20 years ago, air pollution was not even part of the public conversation. As public opinion on the topic gets sharper, public and political awareness will hopefully converge to drive change.”

(Bharadwaj is an intern with IndiaSpend.)