Toxic Air To Blame For Lung Cancer; No Longer Just A Smoker’s Disease

Mumbai: Smokers and non-smokers now represent an equal number of lung-cancer patients, according to a study carried out by the Lung Care Foundation, a not-for-profit organisation focused on improving lung health in India.

An analysis of 150 patients at Sir Ganga Ram Hospital (SGRH), New Delhi, found that close to 50% of patients with lung cancer--the type of cancer responsible for the highest number of cancer deaths nationwide--had never smoked, and yet had developed the pulmonary disease.

Health professionals in India now believe there is strong evidence that points to the role of air pollution in the increasing incidence of lung cancer amongst the young and female populations.

“This is the first time I have seen this 1:1 ratio of smokers to non-smokers suffering from lung cancer”, Arvind Kumar, chairman, centre for chest surgery, Sir Ganga Ram Hospital, New Delhi, told IndiaSpend. “Looking at this data, the obvious reason that comes to mind is air pollution, which contains smoke and PM 2.5.”

PM 2.5 is particulate matter less than 2.5 microns in size, or 30 times finer than a human hair, which, when inhaled deeply into the lungs is known to cause lung cancer, cardiovascular and respiratory diseases. Outdoor pollution was classified as a cancer-causing agent in 2013 by the International Agency for Research on Cancer (IARC), a part of the World Health Organization.

In November 2017, a public-health emergency was declared by the Indian Medical Association in Delhi as the air quality index breached 999, likened to smoking 50 cigarettes a day.

Currently, lung cancer is responsible for five deaths per 1,000 in India (seven per 1,000 in Delhi, a city that regularly experiences high levels of air pollution) and is accompanied by a survival rate of no more than five years.

The effects of air pollution on respiratory and lung health--typically associated with decades of smoking tobacco and tobacco-related products--have become a growing focus for medical researchers and health workers, as awareness of health hazards amongst the public has risen.

In 2013, an eight-year-old girl in China became the youngest person in that country, and possibly the world, to be diagnosed with lung cancer, as a result of exposure to polluted air. She lived beside a busy road and was over-exposed to PM 2.5.

Lung cancer is no longer “a smoker’s disease, a disease of old age and [one of] strong male preponderance”, according to the Lung Care Foundation study.

Compare this to 70 years ago, when the proportion of cancer patients under 30 was 2.5%, according to a study conducted across 15 teaching hospitals between 1955-59.

Lung cancer is typically associated with older patients, since the harmful chemicals found in cigarettes cause damage to cellular DNA over time, reducing the body’s ability to prevent the formation of cancerous cells. In the US, 82% of all lung cancer patients are over 60 years of age and most are diagnosed at Stage III or IV of the disease.

In 2012, 3.2% of women were smokers compared to a 23% prevalence amongst men, according to this study at the Institute for Health Metrics and Evaluation (IHME) at the University of Washington. Women are also less likely to be exposed to work environments which can increase the chances of developing cancer, such as mines and construction sites.

The increasing numbers of non-smokers now suffering from lung cancer, is another ‘disturbing trend’ that points to factors beyond smoking tobacco as being the primary cause.

Of the total 150 patients surveyed, 50% or 74 were non-smokers (meaning they had never smoked in their life). The proportion of non-smokers rose to 70% amongst the younger age category (i.e less than 50 years old).

Amongst the reasons given in the study for non-smokers contracting lung cancer were exposure to radiation and asbestos and occupational hazards attached to mining, in addition to environmental factors such as heavy air pollution. 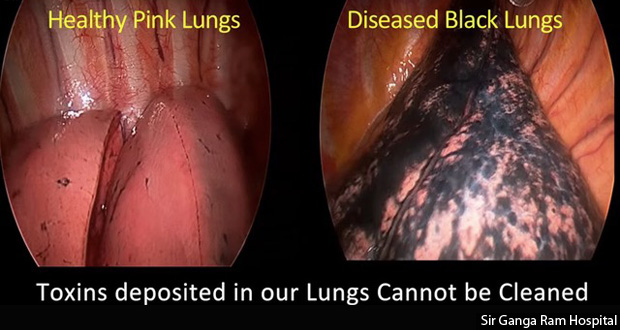 A comparison of images of healthy and diseased lungs. Of 150 lung cancer patients surveyed in Sir Ganga Ram Hospital, New Delhi, 74 were non-smokers.

Lower numbers of patients suffering from squamous cell carcinoma (59) compared to adeno carcinoma (80) are a further indication of the link between increasing lung cancer and polluted air.

“Typically smoking used to cause squamous cell carcinoma, but we now see an increase in women and younger people with mostly adeno carcinoma and this shows their cases are not related to smoking, but pollution,” said Kumar.

Adeno carcinoma (AC) is the most common form of cancer amongst non-smokers and increasing levels of ambient PM 2.5 have been proven to be associated with increasing incidence of AC, according to this 2016 paper in the European Respiratory Journal.

High 24-hour average levels of PM 2.5 is now a year-round problem for the national capital, with residents experiencing zero days of good quality air between March-May 2018, IndiaSpend reported in June 2018.

Increased levels of lung cancer amongst the 20-30 age group and high prevalence of the ardeno carcinogenic pathology point towards a looming epidemic, the study warned. Late detection and misdiagnosis as tuberculosis are further adding to the situation.

However, prevention and early detection is possible. Currently 70-80% of patients are diagnosed at stage III and IV, and health professionals are calling for more screening and diagnosis to take place at stage I instead.

A cancer’s ‘stage’ refers to its size and the extent to which it has spread, and it helps determine the level of treatment. At stage I, the cancer is between 3-4 cm, growing up to 5 cm at stage 2. From stage 3, the cancer begins to spread to the lymph nodes (important for immune response function) and at stage 4, the cancer may be present in both lungs or have had spread to other organs in the body.

A reduction in air pollution levels is also a key point of action for health campaigners, who hope additional data on health risks will activate policymakers into looking at the issue more closely.

“We hope studies like this will help us in going to the government and convincing them this is a public health emergency,” said Kumar. “But we are also focusing on people, making this a people’s movement--if people become conscious about their health and demand clean air as matter of right, then this will become a priority area for the government.”

The decision on whether to ban firecrackers--which emit PM 2.5 and contribute to heavy levels of pollutants in the air--during Diwali was heard in the Supreme Court on World Lung Cancer Day, August 1, 2018. Images of black lung in a non-smoker and lung cancer patient at Sir Ganga Ram Hospital, Delhi, where shown by Kumar in order to show how even young lungs have the appearance of a smoker’s. 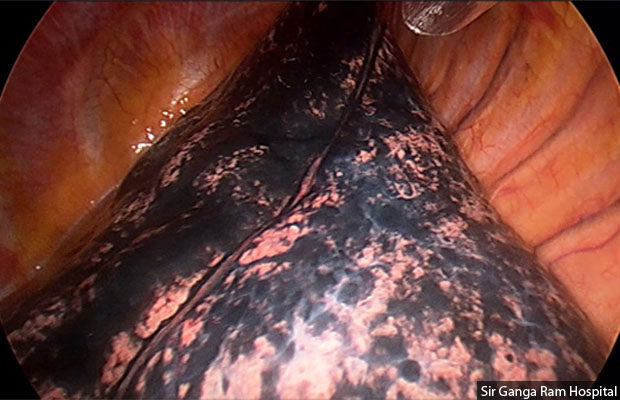 The image of a black lung in a non-smoker and lung cancer patient at Sir Ganga Ram Hospital, Delhi, shows how even young lungs have the appearance of a smoker’s.

Opposition to the ban was heard from firecracker manufacturers who believe the impact on air quality and lung health is not as severe as is made out, positing that the car and construction industries should also bear responsibility for their emissions. The case is now listed for concluding arguments on August 8, 2018.

Over the Diwali weekend of 2016, India’s air quality was among the world’s worst and between 40% and 100% worse in five north Indian cities than at the same time the preceding year, an IndiaSpend analysis of national data and our #Breathe network of sensors showed in November 2016.

Note: The statistics mentioned in the article are based on demographic data released by Lung Care Foundation for public discussion on World Lung Cancer Day. The full study will be published soon following peer-review.

(Sanghera, a graduate of King's College London, is an intern with IndiaSpend.)