Toxic Air Killed More Children Under 5 Indoors In 2016 Than Outside : WHO Study

These findings come at a time when north India is again gripped by polluted air as winter approaches. Air quality in the country’s capital Delhi plunged to the season’s worst levels on October 25, 2018, The Wire reported on October 25, 2018.

The 24-hour average level of particulate matter (PM) 2.5--airborne particles 30 times finer than a human hair that can sicken or kill people by entering their lungs--was recorded at 168 microgram per cubic metre of air (µg/m3) in Delhi on October 25, 2018, about seven times the WHO prescribed 24-hour safe level of 25 µg/m3.

Globally, indoor air pollution caused 3.8 million premature deaths in 2016--a toll greater than that due to malaria, tuberculosis and HIV/AIDS combined--including over 400,000 deaths of under-five children.

In the same year, outdoor air pollution was responsible for about 4 million premature deaths; of these, almost 300,000 were children under five years of age, according to the study.

“Breathing clean air at home is essential for children’s healthy development but widespread dependence on solid fuels and kerosene for cooking, heating and lighting results in far too many children living in terribly polluted home environments,” said the study.

About 3 billion people worldwide still depend on polluting fuels and devices for cooking and heating, as per the WHO study. In India, nearly half of the household population use solid fuel for cooking.

“Women and children spend most of their time around the hearth, exposed to smoke from cooking fires, resulting in indoor concentrations of some pollutants that are five or six times the levels in outdoor air,” the WHO study said.

To assess the levels of air pollution, the study looked at the exposure of children globally to PM 2.5 and its effect on their health during various stages of their physical development. In 2016, children in India were exposed to an outdoor PM 2.5 level of 65 µg/m3. This is more than six times the WHO annual safe level of 10 µg/m3.

A health emergency for children

In India, more than 98% under-five children lived in areas where PM 2.5 exceeded the WHO standard in 2016.

About 93% children and about 630 million under-five children in the world were exposed to levels of PM 2.5 higher than the WHO prescribed safe level of 10 µg/m3.

Children are vulnerable and susceptible to air pollution, especially during fetal development and in their earliest years, according to the study. “Their lungs, organs and brains are still maturing. They breathe faster than adults, taking in more air and, with it, more pollutants," said the report.

“Their bodies, and especially their lungs, are rapidly developing and therefore more vulnerable to inflammation and other damage caused by pollutants,” it said.

Acute respiratory infections caused by air pollution are the second biggest cause of death in under-five children globally, after premature birth--the leading cause--as per the study.

Under-Five Children Living In Areas Exceeding WHO Standard Of PM 2.5, By Country, 2016 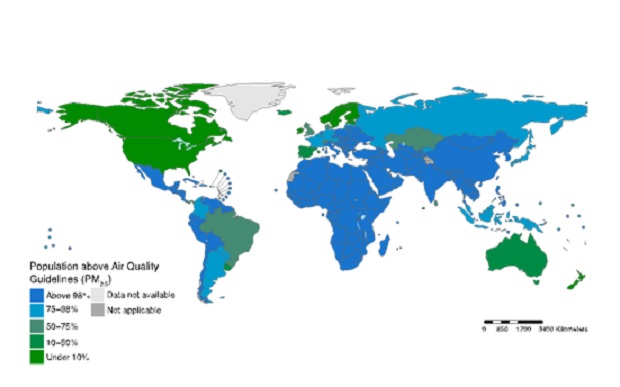 The ravages of air pollution

Exposure to air pollution damages the health of children in numerous ways. Here are some of the evidence-based effects cited in the WHO study:

"In India, infants born to women who used biomass fuels such as wood and/or dung as the primary cooking fuel in the home during pregnancy were more likely to be small for gestational age," said the study.