New Delhi: Focussed on carbon-intensive sectors such as manufacturing and the extraction of fossil fuels and their use for power generation, India’s Rs 20-lakh crore ($260 billion) stimulus package to revive its pandemic-hit economy will have an adverse impact on the environment, said a study comparing packages announced by 17 countries to examine their effects on biodiversity and climate change.

India is the fifth worst performer on the ‘Green Stimulus Index’, tailing South Africa, Mexico, China and the United States (US), said the report released on June 5, 2020, by Vivid Economics, a London-based strategic economics consultancy. 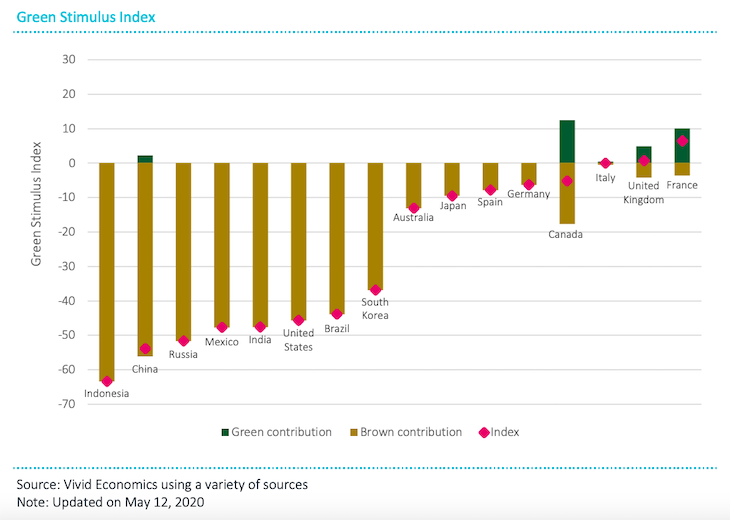 The 17 major economies’ stimulus packages will pump in about $3.5 trillion (Rs 265 lakh crore) directly into sectors such as industry, energy and transportation that have “a large and lasting impact” on climate change, biodiversity and local pollution, the report said. These funds that damage the environment are likely to grow as stimulus efforts deepen.

If these packages support a carbon-intensive path, the progress that the world has made in its fight against climate change will be undone. Thus, some of the biggest global institutions have been urging world economies to keep their post-COVID recovery and stimulus packages green in order to prevent fuelling climate change-causing emissions. India, too, is well placed to take a greener pathway, IndiaSpend reported on May 5, 2020.

The index examines 17 economies to assess the ‘green’ or ‘brown’ orientation of their stimulus funding and scores them on the scale of funds flowing into environmentally intensive sectors, the existing green orientation of those sectors, and the efforts which steer the stimulus towards (or away from) pro-environmental recovery.

Though India gained a few ‘green’ points for its proposed afforestation measures, it scored ‘-60’ brown points due to its decision to support oil and coal, along with rapidly giving approvals to clear the forests for industries, as per the report.

The report lauded India’s decision to create green jobs for vulnerable tribal communities by allocating Rs 6,000 crore ($790 million) for plantation projects as a part of the stimulus package. This move, however, can fuel land conflicts, we explain later.

India’s decision to secure a strategic amount of oil reserves from its trading partners, its decision to further fund coal infrastructure and encourage commercial mining, its fast-tracked environmental assessments and approvals to clear large swathes of forests for industries--these are the reasons for the country’s poor scores in the index.

India has also channelled, as we said, $790 million (Rs 6,000 crore) towards the afforestation programme designed to stimulate the rural and semi-urban economy while providing essential ecosystem benefits, said the report. The jobs created through that funding will support vulnerable tribal populations and help in forest management, wildlife protection and afforestation, the report added.

The funding for these afforestation programmes will come from the Compensatory Afforestation Fund Management and Planning Authority (CAMPA). Chaired by the Union environment minister, this fund has incited conflicts between forest departments and tribespeople in the past and has the potential to fuel them further, IndiaSpend has reported (read the stories here and here).

In 13 of the 17 countries assessed, potentially damaging flows outweighed those that benefit nature. “Of the more developed countries, the US stands out as the largest scale risk, with $479 billion [Rs 36.31 lakh crore] providing unrestricted support to sectors proven to be environmentally harmful in the past amidst several rollbacks on environmental regulation,” the report said.

Emerging economies like India that are dependent on environmentally-intensive sectors and do not have strong regulatory systems “have perhaps the hardest task ahead”, said the report.

India’s stimulus package of $260 billion scored ‘-60’ on the index because it appears likely to support the current brown trajectory of its manufacturing and energy industries.

A large proportion of India’s stimulus is directed at supporting environmentally-intensive industries. A reduction in the stringency of monitoring and approval of environmentally harmful projects risks raising the impact of India’s ‘brown’ industries, the report said.