The Delhi government launched the ‘odd-even’ scheme, on November 4, 2019, to reduce vehicular pollution--odd- or even-numbered private cars would be allowed to run on alternate days. Will this scheme reduce pollution? No, says Sagnik Dey, who studied this exercise when it was implemented for the first time in January 2016. (It was implemented again in April 2016). Dey is an associate professor at the Centre for Atmospheric Sciences and coordinator of the Centre of Excellence for Research on Clean Air at the Indian Institute of Technology, Delhi.

Transportation is the largest source of air pollution in Delhi, contributing 18-39% to the city’s pollution, according to an April 2019 analysis by the Council on Energy, Environment and Water (CEEW), a Delhi-based think-tank. But without including two wheelers, which form the largest chunk of transport emissions, the ‘odd-even’ scheme may not succeed, Dey said.

Air pollution is not only a winter problem. “Year-round, the level (of air pollution) remains three times higher than the national standard. Unless we bring down the annual concentration significantly, health burden will not reduce,” Dey told IndiaSpend. To fight air pollution, governments need not only emergency measures when pollution spikes, but year-round air pollution reduction drives across sectors.

Edited excerpts from his interview:

Looking at the news reports, it seems like air pollution is only a winter problem. Is that true?

This is why the problem is not resolved. In Delhi, we have two major episodes (of air pollution)--the first from mid-October to mid-November and the second from end-December to mid-January. But year-round, the level (of PM 2.5) remains three times higher than the national standard. Unless we bring down the annual concentration significantly, health burden will not reduce.

During the first five days of November 2019, when the focus was on Delhi’s severe level of pollution, it was not the worst-polluted among the nearly 100 cities across India that the Central Pollution Control Board (CPCB) monitors daily. On three (November 2, 4 and 5) out of five days, Delhi did not even make it to the list. Yet, media attention was narrowly focused on Delhi. The government has a National Clean Air Programme (NCAP) with a target of reducing pollution by 20-30% across India by 2024. Your thoughts?

The entire Indo-Gangetic Plain has pollution levels at an annual scale more than double the Indian standard. Today, more than 76% of the population lives in places that do not meet Indian air quality standards. Unless we form an intersectoral plan, it will not work.

We think that rural areas are not polluted, but studies have shown that emission from household activities (cooking and heating with solid biomass and kerosene lighting) has the highest contribution at the national scale, higher than contributions from transport, power plants and industry. NCAP is a good start.

We have Ujjwala programme running and its successful implementation would ensure a large reduction in the regional pollution level. Eventually programmes such as NCAP, Ujjwala, Smart City Missions need to be linked. 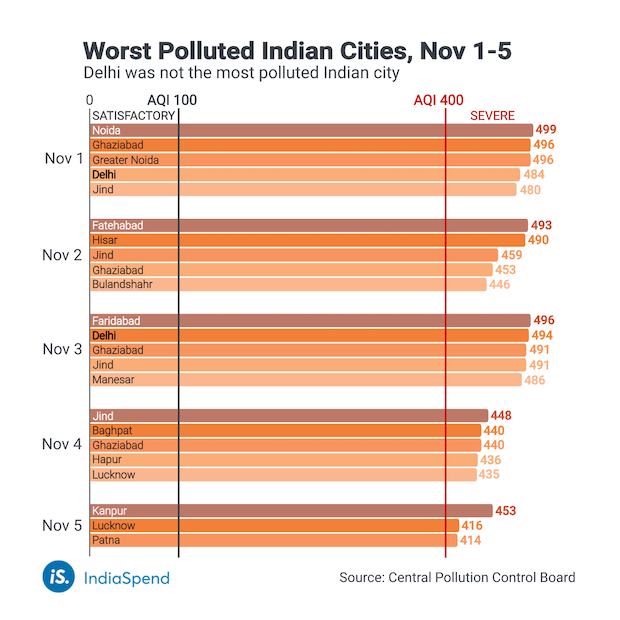 Note: AQI, a composite number for many pollutants, is used by governments to communicate to the public how polluted the air is. AQI of 100 is considered satisfactory in India. This graph only includes cities that had an AQI above 400 on that day.

What do you think about India’s air pollution standards? The WHO has said that no amount of PM 2.5 is healthy exposure, and India’s standards are three times higher than WHO-prescribed safe levels.

Indian standard is surely very high, but that is the first target. This needs to be kept in mind. This is why AQI gives a false sense of security. As per the current AQI, good is anything below 50, which is actually not good as per WHO and numerous studies. This is why, when pollution levels drop to moderate (100-200), people think it's better, but it's not. We need more awareness, and that too outside Delhi.

Coming back to Delhi and north India, how big a problem are crop burning and fire-crackers? How much do they contribute to Delhi-NCR’s pollution load?

On a given day, crop burning contribution can be very high, but keep in mind that crop burning is only for a couple of weeks. What about the rest of the year? No doubt that we need to control crop burning but we should not blame crop burning alone. There are some studies which have shown large influence of firecrackers on those days (pollution spikes during Diwali). Again these are periodic sources.

There are efforts to bring down crop burning which should be effective in a few years. But at the same time, we need to work on reducing emissions from other sources in the National Capital Region and the entire Indo-Gangetic Plain. This will not happen overnight and needs inter-sectoral approaches. Several recommendations are available. They need to be implemented properly.

(For the spike in pollution, Delhi’s chief minister Arvind Kejriwal blamed stubble burning in the adjacent states of Haryana and Punjab, where hundreds of thousands of farmers burn crop residue after paddy cultivation to quickly clear their fields to sow winter crops.

However, contribution of stubble burning in Delhi’s air pollution was never more than 50% this season, until November 5, 2019, as per data from the System of Air Quality and Weather Forecasting And Research (SAFAR), an arm of the Ministry of Earth Science. The maximum contribution by stubble burning was recorded on October 31, 2019, at 44%.)

Why does pollution spike during winters?

In October, as temperatures start dropping, the height of the mixing layer (the layer adjacent to the ground over which an emitted particle rests) reduces, trapping the pollutants closer to the ground. Even if your emissions remain constant, pollution levels will increase. Therefore, there is no other way than reducing emissions, and this can happen if you target all the sources. That does not happen overnight, you need to plan year-round.

Will the ‘odd-even’ scheme work? What were the findings of your study assessing this exercise in January 2016?

Previously, we found that it did not work except at three local places--where pollution reduced by up to 10% only. This was because too many exemptions were added in the scheme and the meteorology was unfavourable.

The study concluded that traffic restrictions between January 1 and January 15, 2016, reduced PM 2.5 by 4-6% on average, and by a maximum of 10% at three locations. The failure of the scheme was attributed to stable meteorological conditions, which meant that winds were not strong enough to disperse PM 2.5 away, or impact the PM 2.5 outside the periphery of the city, where the scheme was not implemented. Restricting traffic volume alone cannot control the PM 2.5 concentration over Delhi, which has multiple sources.

There were three other studies on the ‘odd-even’ scheme with different results. For example, a study by the Energy Policy Institute at the University of Chicago (EPIC) showed larger reductions, while the CPCB study was not sure about the impacts. Another study by the Indian Institute of Tropical Meteorology (IITM) and India Meteorological Department (IMD) said that pollution increased on those days. Can a common thread be found among all of these studies?

The CPCB study you mentioned also did not find large-scale reduction. It could not find any clear trend in the concentration level of PM 2.5. “Overall, it can be stated that while some reduction in air pollution is likely to happen due to odd-even scheme, a single factor or action cannot substantially reduce air pollution levels in Delhi,” it said.

Other studies have found different results due to different methodologies and analysis designs. The divergent results across studies require careful deliberation and reconciliation. Therefore government officials and media commentators should not rush to declare the scheme as a success or failure prematurely.

The June 2016 study by EPIC, which evaluated both phases of the ‘odd-even’ scheme in 2016 (January and April), found that relative to surrounding satellite cities, PM 2.5 concentrations in Delhi’s air were lower by 14-16% during the January pilot. In contrast, the programme did not affect Delhi’s air quality during the warmer month of April.

The 2018 study, jointly conducted by IITM, Pune, IMD, New Delhi and the Ministry of Earth Sciences, said that pollution increased during this period as vehicular emissions did not reduce. “...Many four-wheeler users chose to commute earlier, to beat the 8 a.m. to 8 p.m. restrictions, and/or there was an increase in the number of exempted public transport vehicles,” it said.

Two-wheelers emit about 32%, diesel trucks 28%, four-wheeled private cars 22%, CNG buses 7% and auto-rickshaws 4%, of the total transport pollution in Delhi, as per data from the Centre for Science and Environment. Given that the ‘odd-even’ scheme exempts two-wheelers, can it succeed?

Without two wheelers it may not succeed. Also one needs to be careful about interpreting outcomes (of the scheme). Day-to-day variability in air pollution is influenced by weather.

How do you assess Delhi’s Graded Response Action Plan (GRAP), which requires 48 hours of above-300 PM 2.5 concentration to come into action? GRAP includes emergency measures to cut pollution--ban on garbage burning, entry of trucks into the city and the closure of power plants, brick kilns and stone crushers.

GRAP is a good initiative but it is for an emergency situation. Do you like to treat a patient with medicine before he goes into a coma or do you act after when very few choices are left?