New York: At the United Nations (UN) emergency climate summit, 16 children, including India’s Ridhima Pandey, said they would petition the UN against five big carbon polluters in the world--Argentina, Brazil, France, Germany and Turkey--for violating their rights as children by failing to adequately reduce emissions.

Pandey, 11, is from Haridwar in Uttarakhand, and had, in 2017, filed a case against the Indian government at the National Green Tribunal for failing to take action against climate change.

As countries reiterated old promises to control climate change, the youth, led by 16-year-old Swedish climate activist Greta Thunberg, emerged as climate leaders. “I should be back in school on the other side of the ocean. Yet you come to us young people for hope. How dare you?” said Thunberg.

Every country, except the United States, has ratified the UN Convention on the Rights of the Child. Of those countries, 45 have agreed to an additional protocol that allows children to petition the UN directly about treaty violations.

Within that group of 45, Argentina, Brazil, France, Germany, and Turkey are some of the biggest emitters of the pollution that causes climate change. None of the five is on a path needed to keep the planet from heating over 1.5 or 2 degrees Celsius by the turn of the century.

The petition by children comes on the heels of the latest report by the World Meteorological Organization (WMO) that said global temperature has risen by 1.1 degrees Celsius since systematic record-keeping began in 1850, and by 0.2 degrees Celsius compared to 2011-2015.

“Climate change causes and impacts are increasing rather than slowing down,” said Petteri Taalas, secretary general of the WMO.

Antonio Gueterres, the UN secretary general, has praised Thunberg for her leadership, calling it “absolutely remarkable”. The UN credits the pressure from the youth for pushing climate action across countries. 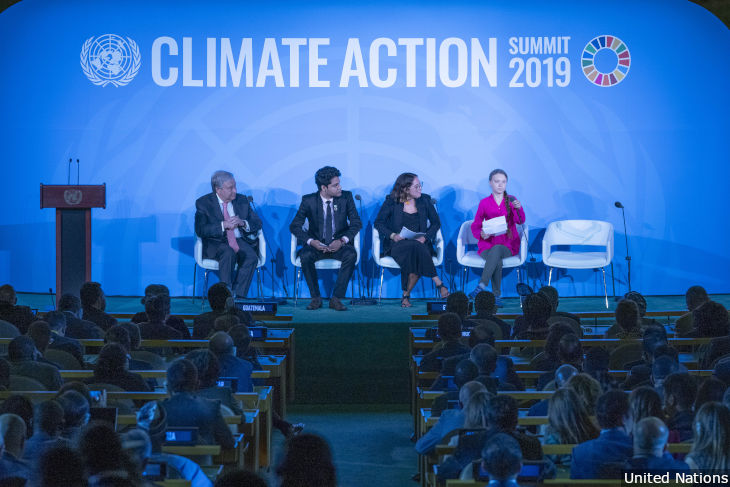 “I should be back in school on the other side of the ocean. Yet you come to us young people for hope. How dare you?” said 16-year-old Swedish climate activist Greta Thunberg at the United Nations Climate Action Summit 2019 in New York.

Closer home, 600 million people living in the Indo-Gangetic plain stand to be affected, as global warming causes Himalayan glaciers to melt, threatening the steady flow of water to the Ganga and its tributaries, according to World Bank estimates.

Nearly 148 million Indians live in areas that are “severe hotspots” of climate change and are already witnessing large-scale changes, as a special IndiaSpend reporting project has chronicled. Climate change has led to a rise in extreme events like floods and heatwaves. It threatens India’s water security and could widen inequality.

Yet, at the summit, India only reiterated commitments already made several years ago.

Despite efforts, CO2 (carbon dioxide) emissions continue to rise at a 2% growth rate. Currently China is the highest emitter of earth warming greenhouse gases (GHGs), followed by the United States (US), the European Union (EU) and India.

Prime Minister Narendra Modi was one of more than 90 speakers at the climate summit. India will scale up renewable energy to 175 gigawatt (GW) by 2022 and to 450 GW in the coming years, he said, without giving a specific deadline. He also said that India was focussing on increasing the use of bio-fuels and was successful in providing 150 million families with clean cooking gas. He reaffirmed India’s commitment against single-use plastic but said nothing about reducing the use of coal, which has been flagged as a concern in fast-growing India and China.

India is one of the few countries on track to meet the targets it set itself at the 2015 Paris summit and justifies the platform the UN has given for it to speak at the climate summit, said Leena Srivastava, outgoing vice-chancellor of Delhi-based The Energy and Resources Institute (TERI) School of Advanced Studies, and co-chair of the Science Advisory Group of the UN Climate Summit. “If you look at the totality of it and not just one part of it then I think we deserve to be on the platform.”

Countries need to do more 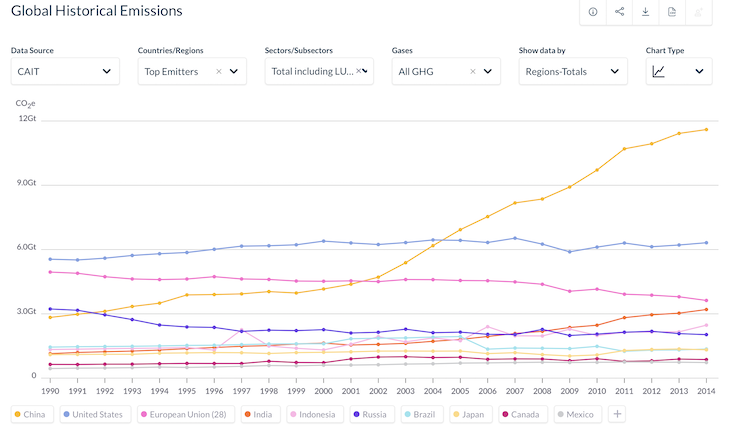 “Science tells us that on our current path, we face at least 3 degrees Celsius of global heating by the end of the century,” said UN Secretary-General Guterres. He had set an ambitious target for those in attendance: reduce carbon emissions by 45% by 2030 and make it net-zero by 2050.

“We are at risk of crossing several critical tipping points in the country systems,” said Srivastava of TERI. “There is also in the science community a greater recognition of the fact that climate change impacts are hitting harder and sooner than what climate assessments had estimated nearly a decade ago and that is something we need to worry about.”

So far 66 countries have said they will step up their Nationally Determined Targets or NDCs--targets to reduce carbon emissions that each country sets for itself under the 2015 Paris Agreement.

The UN had said that only countries with strong plans would be allowed to speak at the New York emergency climate summit, but most countries, including India, as we explained above, only reiterated old promises.

“While countries were expected to come to the summit to announce that they would enhance their climate ambition, most of the major economies fell woefully short. Their lack of ambition stands in sharp contrast with the growing demand for action around the world,” said Andrew Steer, President & CEO, World Resources Institute (WRI), a global research organisation.

The US President, Donald Trump, who was invited but had said he would skip the climate summit and send a delegation instead, made a brief appearance as PM Modi took to the stage. The US, one of the largest greenhouse emitters, has pulled out of the Paris Agreement.

New Zealand Prime Minister Jacinda Ardern spoke of her country’s prior commitment to plant a billion trees by 2028. She reiterated that New Zealand has also stopped issuing permits for offshore oil and gas exploration and aims for 100% renewable electricity generation by 2023.

German Chancellor Angela Merkel said her country would phase out coal by 2038, an announcement she had made earlier this year.

Recognising the need to rope in corporations, the UN has made an effort to encourage them to set ambitious targets. Eighty seven major corporations--with a combined market capitalisation of over $2.3 trillion and annual direct emissions equivalent to 73 coal-fired power plants--are taking action to align their businesses with the Paris climate summit targets.

Banks financing development projects and CEOs of companies said they would stop investing in coal. “Coal is out of the window for funding,” said Peter Hiliges, head, climate change at the German bank KfW that funds development projects. Oliver Bäte, the CEO of Allianz, an insurance company, reiterated their stand of not selling insurance to companies investing in coal.

Ahead of the UN #ClimateAction Summit, 87 major companies with a combined value of US$ 2.3 trillion have set ambitious climate targets.

We are starting to see the transition from a grey to a green economy that we urgently need.https://t.co/1t50K13gGj

In a recorded message, Pope Francis called the post-industrial era the most “irresponsible” and questioned the political will to mitigate the impact of climate change. 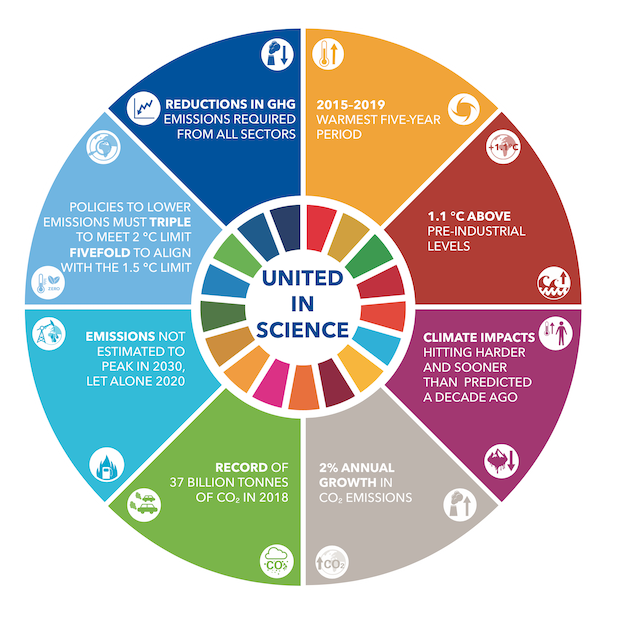 The world temperature has increased by 1.1 degrees Celsius since systematic record keeping began in 1850, and by 0.2 degrees Celsius compared to 2011-2015.
Source: United in Science report, WMO, September 2019.

Without climate action, human emissions are expected to peak well beyond 2030, according to the latest WMO report.

Leading scientists tell us that the gap between what we should do to tackle the climate crisis & what we are actually doing, continues to widen.
We must reverse this trend with decisive #ClimateAction.
New United in Science report: https://t.co/in4a0IEMvA pic.twitter.com/a1uMffxFWv

The UN has asked governments to end all subsidies to fossil fuel companies by 2020, and incentivise renewables. “After all, is it common sense to give trillions in hard-earned taxpayers’ money to the fossil fuel industry to boost hurricanes, spread tropical diseases, and heighten conflict?” Gueterres asked at the climate summit.

“Fossil fuel companies must pay to clean up the mess they have made. Rich country governments must stop giving handouts to those companies. Instead, they need to support communities on the frontline of the climate emergency rather than those who created the crisis in the first place,” said Harjeet Singh, global lead on climate change at ActionAid, a South Africa based nonprofit.

The UN has also called for no new coal plants from 2020, asking countries to turn to renewable energy instead. India currently gets over 76% of its energy needs from coal, as IndiaSpend reported earlier. Only one-twentieth of its energy comes from renewables, although it is a fast-growing segment. PM Modi was silent on coal during his UN address.

India and China continue to open new coal plants despite the 2020 deadline set by the UN, as these countries have to balance the energy needs of the underserved population while meeting climate targets.

“Yes, there are plans to build coal-fired power plants but we are doing very well in terms of renewable energy expansion,” said Srivastava of TERI on India.