Bengaluru: After the hottest summer in recorded history, India endured a delayed monsoon and widespread floods. Assam in the north-east was one of the earliest states to be ravaged by floods, followed by Maharashtra and Kerala. By mid-August, states in central India began to flood.

Extreme rain events over central India tripled between 1950 and 2015, according to a 2017 study led by researchers at the Indian Institute of Tropical Meteorology (IITM), Pune, affecting about 825 million people, leaving 17 million homeless and killing about 69,000.

The probability of similar flooding in the years to come is high, driven by a global rise in temperatures--1 deg C since systematic record keeping began in 1850--according to an October 2018 report by the Intergovernmental Panel on Climate Change (IPCC), the United Nations (UN) body formed to assess science on climate change.

“The total rainfall has not changed much but extreme rainfall has increased, and this will lead to more floods,” said J Srinivasan, founder chairman and distinguished professor at the Divecha Centre for Climate Change (DCCC) under the Indian Institute of Science (IISc), Bengaluru.

Even as India is likely to end with an excess of 1% rainfall in 2019, large parts of the country face a rainfall deficit. 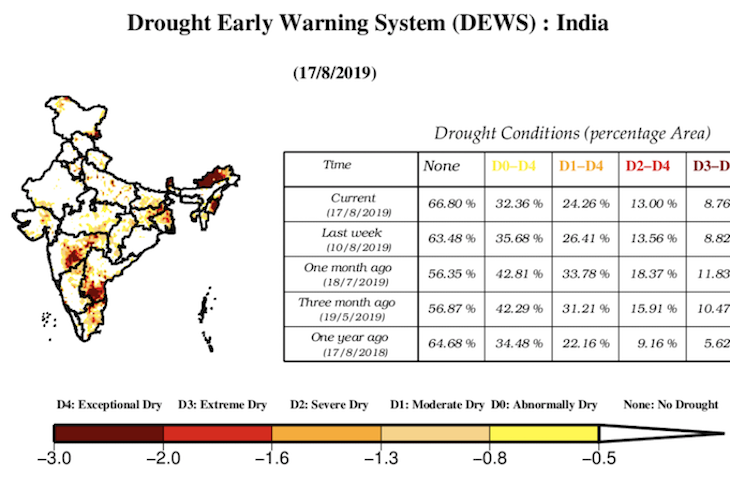 India’s per capita availability of water is 1,544 cubic metre, water resources minister Gajendra Singh Shekhawat told parliament’s upper house, the Rajya Sabha, in July 2019, compared to 1,816 cu m in 2001. The average for lower middle-income countries, the group that India is a part of, based on its per capita income, is 3,013 cu m. For high-income countries, this number is 8,822 cu m. 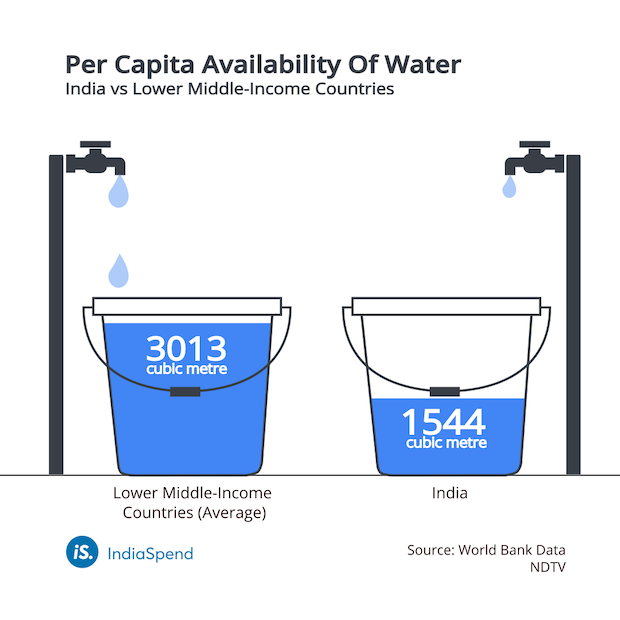 “Our per capita water availability is one of the lowest in the world, and hence we need to use water carefully,” said Srinivasan. “This was not needed 72 years ago, when our population was just 350 million.”

In the summers, when the land heats faster than the ocean, hot air rises and the air pressure decreases. This causes wind over the oceans to rush in, bringing with them moisture, which falls as rain. In winters, this process is reversed. This annual wind-driven weather pattern is known as the monsoon. Apart from India, this process brings rain to parts of Africa, Australia and North and South America.

The Indian monsoon is responsible for close to 85% of India’s annual precipitation.

“One of the main factors that affect the onset of monsoon and its strength is the temperature gradient between the Indian subcontinent and the tropical Indian ocean,” said Deepti Singh, assistant professor at the School of the Environment at the Washington State University in Vancouver, Canada.

Much of India gets rainfall for four months in a year and goes without it for the remaining eight. Scientists are split between whether the Indian monsoons are erratic or not. Singh said it depends on who you ask.

“If you look at the Indian monsoon the inter-annual variation is 10%,” said Srinivasan. “Our society has lived with this variation for thousands of years, but now we are unable to cope because of poor water management practices.”

The Indian monsoon is changing in “significant ways”, according to emerging research.

On the whole, the monsoon was “weakening in the long-term”, said a January 2019 review of existing studies by Singh and her colleagues. The rainfall over central India since the 1950s has declined, and more recently, it has risen over northwestern Rajasthan and parts of peninsular India.

But there is a catch.

This rainfall is coming and is predicted to come in the future in heavy bursts and is interspersed by several dry spells. This makes farming unsustainable, as IndiaSpend reported in May 2019 from Rajasthan. These dry spells will also become more frequent, the review suggested.

“Overall, there has been a weakening of (the) monsoon and the variability (within a season and day-to-day) of monsoons has increased,” said Singh, stressing, like Srinivasan, that the average rainfall has not changed by a substantial margin.

Rainfall depends on several factors, some local, others global. Pollution due to aerosols--suspended solid or liquid particles in the air--is known to weaken rainfall locally and shift rainfall patterns across the subcontinent, as IndiaSpend reported in March 2019, while the global rise in temperature is known to strengthen the monsoon.

Long-term projections suggest that rainfall patterns will change: There is likely to be an increase in rainfall across much of India, as the effects of greenhouse gases emerge over the effects of aerosols (or air pollutants).

The effect of local air pollution is substantial as Indian cities occupy all top five slots in the 2018 World Health Organization list of the world’s most polluted cities, measured for particles that are 2.5 micron in diameter (PM 2.5) or less, or about 30 times finer than human hair.

“Attribution of changes in monsoon has been a challenge because there are several factors--greenhouse gases, local and remote aerosol emissions, and extensive land-use land-cover change--that are changing, and these factors have competing effects,” said Singh. “However, most scientific evidence so far points to the dominant role of aerosols in weakening in the monsoon since the mid-20th century.”

The 2019 monsoon season began with fears of deficit rainfall, which officials explained as a natural monsoon cycle or epoch. “Some epochs we will have less rainfall. We are going in a low-epoch phase,” said Madhavan Rajeevan, atmospheric scientist and secretary, ministry of earth sciences. “We thought it will move into a positive epoch, but that is not happening. That could be a climate change aberration.”

Asked if the changes in monsoon patterns were a result of climate change, Rajeevan said: “It could be. Still I’ll say it could be. That’s the word I’ll use, it could be.”

So, experts agree that while rainfall extremes could be because of climate change, the floods may not be. What then? Bad planning.

Floods: Not a climate but a planning disaster

The damage that floods cause are a combination of heavy rainfall and man-made activities. Dams along Maharashtra’s Krishna river this year and Kerala’s Periyar river last year were opened around the time when surrounding villages were inundated, further exacerbating the floods.

Often, water released from dams flows into rivers already constricted by construction. “The rules are very simple. Most rivers in India will wander a little bit during the monsoon. Give them space. In many cities so much construction has been done, the river has no space to move,” explained Srinivasan of DCCC. “You are allowing people to construct where there should be no construction.”

Indiscriminate construction in hills and mountains cause landslides. “This year’s rainfall in Kerala is not as heavy when compared to last year,” said Srinivasan. “Lots of destruction (this year) is because of quarrying.”

In Kerala, 76 people died over four days from August 8, 2019: 28, or nearly one in three, died in the 83 landslides, a fallout of excessive quarrying in the eco-sensitive and biodiverse Western Ghats.

India is among the top 20 countries in the world to experience extreme weather events between 1998 and 2017, according to a 2018 report by a German non-profit that tracks climate risk. 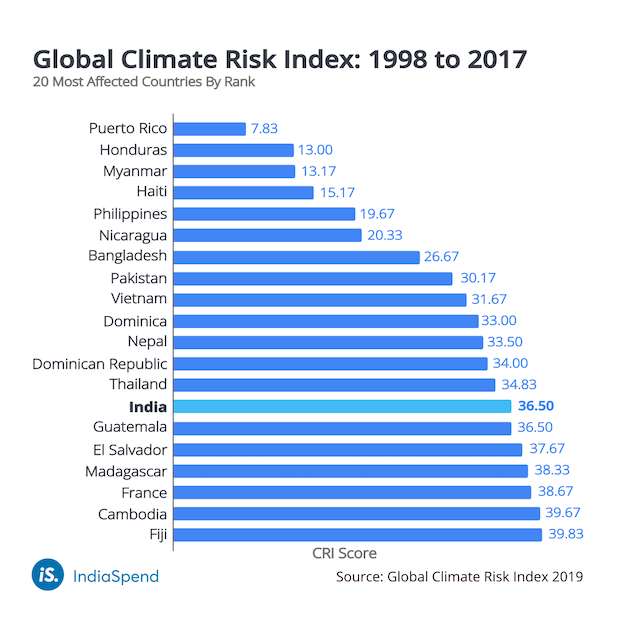 “The uncertainty has become even more enormous,” said Namrata Ginoya, who studies climate resilience at World Resource Institute (WRI), India. “Areas that were drought-prone have been receiving flash floods, which is a rare phenomenon.”

“Our central and state departments have plans for drought-prone areas, but those plans alone will not be enough anymore,” said Ginoya. “The same areas (that are drought-prone) will have to plan for extreme precipitation events.”

Cherrapunji in Meghalaya, one of the world’s wettest places, is already battling water scarcity.

While the government struggles to plan better, communities are forced to adapt, using migration as a survival strategy.

Migrating to survive, leaving women behind

India does not track environmental migrants, so it is not clear how many there are, although evidence of this kind of migration is common, as IndiaSpend reported in September 2018.

While not all migration is driven by environmental issues, the ones that are could throw up new challenges.

“When people who are used to dealing with drought and water scarcity in rural areas (for instance, water-scarce districts, such as Kolar, Gulbarga and Raichur in Karnataka) migrate, they enter new risks such as localised flooding in Bengaluru, something they are not used to,” said Chandni Singh, environmental social scientist at the Indian Institute for Human Settlements, Bengaluru, who co-authored a March 2017 paper that explored how communities are responding to changing climate.

“All this movement is changing how households are configured and how labour is divided within the household,” said Singh. “So, we collected stories of men commuting to Bengaluru from Kolar leading to women in these households being 'left behind' and taking over additional chores of farming (which the men earlier dealt with).”

On the positive side, farmers in Karnataka’s Gulbarga and Kolar districts used innovative methods, such as soil and water management techniques and planting indigenous climate-resilient crop varieties, to cope with climate change. Some have turned to rainwater harvesting, drip irrigation and organic farming as a way to adapt, Chandni and her colleagues reported in a 2018 paper.

The government agrees that it needs better policy to cope with the rise in extreme weather events.

Others advocate a radical shift in managing water, calling for a groundwater policy that monitors water extraction. “We are approaching water as a commodity and not something which is a living entity. We do not give it the importance it deserves,” said Ginoya of WRI.

Since 1947, India’s population has increased over four times. “This automatically means the water availability per person is now one-fourth of what it was,” said Srinivasan from DCCC.

The changing pattern of India’s monsoon is a worry, but it is only an added stressor to the pre-existing problems of population growth and haphazard planning.

(Shetty is a reporting fellow at IndiaSpend.)