New Delhi: While Indians rejoiced over clear, pollution-free skies during the nationwide lockdown to contain COVID-19, which is still partially in force, they paid little heed to a silent killer that may have grown more dangerous during this time: household or indoor air pollution (HAP).

The lockdown from March 25, 2020, which saw more meals being cooked at home than usual, may have led to an almost 2%--or about 150 tons per day--increase in total household PM 2.5 emissions in India, according to the preliminary findings of a yet-to-be published study by the World Resources Institute (WRI) India, the Indian chapter of a global think-tank researching environmental and developmental issues.

Moreover, with an estimated 50% of the population that is usually away during peak cooking hours being confined indoors, the number of people affected by HAP is likely to have increased significantly, the study found.

Particles of PM 2.5--fine inhalable particulate matter that can enter the blood-stream--are emitted when solid biomass fuels such as wood, charcoal and dung are burnt for cooking or heating. About 78% of India’s 1.3 billion population uses these solid fuels for their primary and secondary needs, according to WRI India’s calculations.

"Indoor air pollution, while not as much in the public eye as ambient air, is a silent killer, especially among the urban poor and the rural population, who use solid biomass fuels,” said Ajay Nagpure, head of WRI-India’s air pollution division, who is leading this research.

About half a million Indians die prematurely every year due to diseases caused by HAP exposure, including heart disease, strokes, respiratory diseases and lung cancer. Young children, women and the elderly are the worst affected. The main policy step taken by the government to address the cost to human health of HAP has been to incentivise households to use clean liquefied petroleum gas (LPG) for cooking, in place of polluting biomass fuels, but the impact has so far been limited, we reported, and experts have asked for more sustained and targeted efforts to achieve this.

The average daily concentration of PM 2.5 inside a home using solid cooking fuel can be anywhere in the range of 163-600 micrograms per cubic metre (µg/m3), according to this study. This is between six and 23 times the safe level of daily air pollution exposure of 25 µg/m3 recommended by the World Health Organization (WHO).

On March 25, India shut down all transport, most industries and commercial activities with the start of its lockdown. In the weeks that followed, the country--home to 14 of the world’s top 20 most polluted cities--saw outdoor air pollution plummeting exponentially, IndiaSpend reported on June 24, 2020. For example, the Central Pollution Control Board found that outdoor air pollution in Delhi had halved over 20 days, from March 25 to April 15.

On the other hand, WRI India’s research showed that the indoor air pollution story was very different. In order to estimate household pollution levels during the lockdown, WRI India researchers collated three kinds of data: the projected state-wise population figures for India for 2020, state-wise cooking fuel usage by households, for both primary and secondary purposes, and the number of meals consumed in a day by urban and rural homes, along with details of consumption patterns, including where meals were eaten and who provided them. These figures were obtained from surveys conducted by Census of India and National Sample Survey Office.

The researchers estimated that during the first two months of the nationwide lockdown, when people mostly stayed inside their homes, 3% of the meals that the urban and rural Indian population eats outside their households had shifted indoors where, as we said, 78% of India’s 1.3 billion population used polluting fuels as their primary or secondary fuel for cooking. The meals cooked at home during this period included those normally purchased from restaurants, those supplied by employers and those provided by the government or charitable organisations (for example, mid-day meals for school-children).

The national daily average household emission for PM 2.5 increased from nearly 8,600 tons to about 8,750 tons per day during the lockdown, according to the WRI India analysis.

WRI India’s estimates for daily household PM 2.5 emissions were more accurate than previous studies, Nagpure said, because they had taken into account PM 2.5 emissions for both primary and secondary usage of solid fuels, instead of accounting only for primary usage. Primary usage refers to solid fuels being the primary source of cooking in a household and secondary usage refers to solid fuels being used alongside clean fuels such as LPG.

Nagpure also suggested that the household emission levels of PM 2.5 might be even higher during the lockdown than WRI India’s research had shown, since several LPG users may have stopped using costly LPG after having lost their jobs or sources of income.

“Social distancing under COVID-19 may have reduced travel-related emissions, but it has very likely also disrupted the supply of LPG, thereby increasing the emissions within households,” said Hem Dholakia, an independent policy researcher.

Although India has partially relaxed its lockdown, this will not necessarily lead to a significant fall in indoor pollution levels, according to Nagpure. “During the partial relaxation of the lockdown, the increase in daily emissions that we have recorded may go down,” he told IndiaSpend. “But it is not just a matter of people leaving their homes; the avenues for meals outside the home, including community kitchens and restaurants, also need to be open,” said Nagpure. 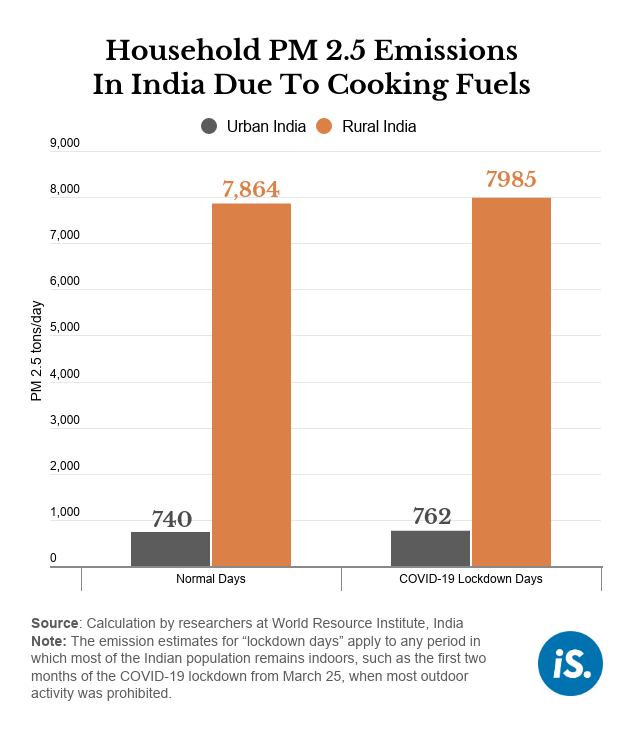 Kerala, with an increase of 20 tons a day in PM 2.5 emissions, Maharashtra (15 tons/day), West Bengal (14 tons/day) and Jharkhand (12 tons/day) are emerging as the biggest indoor emitters among states in this study, which will explore the variations between states in generating household emissions. Nagpure told IndiaSpend that the level of emissions in a particular state depends on the factors such as the overall population of the state or union territory (UT), the proportion of people eating outside the home, and the share of the population using biomass for cooking.

In Kerala, which is the top emitter according to this study, 50% of the rural households use clean cooking fuels such as LPG, but they do not use it exclusively, and also make use of hazardous fuels in the kitchen, IndiaSpend reported in April 2018.

Other major contributors to household air pollution include such as Andaman and Nicobar Island, Chandigarh, Dadra and Nagar Haveli, and Daman and Diu, the study has found.

With about 50% of India’s population--that is, people who normally leave their homes to work or go to school, during peak cooking hours in households--staying indoors during the lockdown, the number of people exposed to increased levels of HAP had also greatly increased, the study found.

Of particular concern is the increased exposure to household PM 2.5 emissions of those more prone to develop respiratory illnesses due to such exposure, such as children and the elderly, and of worsening exposure to women, who already bear the brunt of HAP since they do most of the cooking.

Results from a study of men and women over 60 showed a higher prevalence of asthma in households using biomass fuels than those using cleaner fuels.

Along with posing a health risk through direct exposure, HAP is also one of the largest contributors of outdoor or ambient air pollution in India. “About 30% of ambient air quality exposure on average is linked to household sources--the single largest contributor nationally,” Santosh Harish, fellow at the Center for Policy Research (CPR), a Delhi-based think-tank, told IndiaSpend.

The central government launched its flagship cooking energy programme, Ujjwala, in 2016 to alleviate the public health burden of HAP by providing a subsidy and loan for the upfront cost of acquiring an LPG connection. Since the launch, over 80 million connections have been issued so far, IndiaSpend reported on May 11, 2020.

Still, having a free connection is not enough. Steep recurring expenses for LPG, the easy and often cost-free availability of solid fuels and the poor availability of LPG in rural areas continue to limit the extent to which households use LPG for cooking needs, we reported.

As part of the relief response to Covid-19 under the banner of the Pradhan Mantri Garib Kalyan Package, over 80 million Ujjwala beneficiaries were awarded three free LPG refill cylinders for three months from April 1, 2020, that is, 80 million cylinders were to be distributed every 30 days. However, only 68 million cylinders were distributed over 50 days to May 20, 2020, the government data showed. Assuming one free cylinder went to a single family, about 12 million families had not received their first free cylinder almost two months into the lockdown that started on March 25, 2020.

The provision of free LPG cylinders as part of COVID-19 relief measures is a welcome step, and should ideally be continued as part of a social protection package, Harish said, to bring down HAP levels. (Read IndiaSpend’s report on this solution published on May 11, 2020.)

However, Harish stressed that the LPG subsidy regime should be overhauled, making it better targeted towards those who really need it and towards reaching greater numbers of such people. Subsidising urban middle class consumers through this scheme was a poor allocation of resources, he said.

Targeted policies to further improve the affordability of LPG refills for poor households, promoting its use at the community-level, reducing the distance travelled to procure LPG and ensuring predictable and regular cash flow to the poor would facilitate sustained use of clean cooking fuels, our May 11, 2020 report said.