New Delhi: The subsidy on liquefied petroleum gas (cooking gas) cylinders for India's newly-connected 73 million poor households should be increased enough to limit the cost of a cylinder to 4% of a household’s monthly expenditure, according to a study.

The subsidy should only be provided to poor households, and the wealthy should be removed from the beneficiaries list, according to the June 15, 2019, policy brief titled “Ujjwala 2.0” by Collaborative Clean Air Policy Centre (CCAPC), a multi-organisational initiative.

By distributing 73 million connections (as on July 14, 2019), the Ujjwala scheme has met 91.25% of its target of 80 million connections to poor households by 2020. This is a 35-percentage-point rise since 2014. However, despite the soaring consumer numbers, cooking gas consumption rose by just 0.8% over two years to 2017, and the number of customers increased by 6%, IndiaSpend reported on April 22, 2019.

Beneficiaries under the Ujjwala scheme have only bought 3.4 refills per capita annually, according to government data. For these households to completely switch to cooking gas, at least nine cylinders are required per year, according to the CCAPC brief.

Ujjwala beneficiaries have not switched completely to cooking gas because the refills are expensive. Around 85% of Ujjwala beneficiaries in rural Bihar, Rajasthan, Uttar Pradesh and Madhya Pradesh--where two-fifths of India’s rural population lives--still use solid fuels, IndiaSpend reported on April 30, 2019.

This is due to gaps in the Ujjwala scheme itself. The CCAPC brief suggested plugging these gaps with increased subsidies to poor households, and better targeting of subsidies.

Strengthening the Ujjwala scheme is also important to mitigate the health burden of India. Burning firewood, dung and agricultural residue for cooking and other household uses accounts for 25-30% of exposure to outdoor particulate matter (PM) pollution in the country. Each year, around 480,000 Indians die prematurely due to direct exposure to household air pollution, and another 270,000 succumb to indirect exposure outdoors, the policy brief stated. 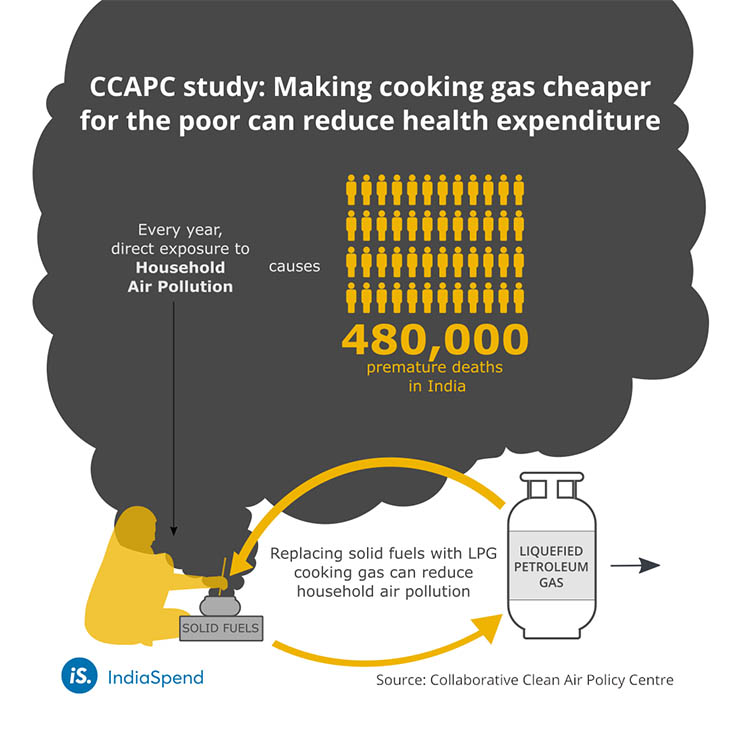 Using cooking gas can help prevent such deaths, as well as reduce government expenditure on treating ailments that result from exposure to biomass fumes.

With each cooking gas cylinder distributed, the government can save between Rs 3,800 and Rs 18,000 on health expenditure. When cooking gas usage mitigates the household biomass burning completely, 58% of the country’s 597 districts will breathe safer air, the brief said.

The initial goal of the Ujjwala scheme launched in 2016 was to target 50 million poor households, of 87.3 million identified by the Socio Economic and Caste Census 2011 (SECC).

In February 2018, this target was revised to target most of the 80 million poor households by 2020. The scheme was also expanded to cover all scheduled caste/scheduled tribe households, beneficiaries of Pradhan Mantri Awas Yojana (Gramin) (PMAYG), Antyoday Anna Yojana (AAY), forest dwellers, most backward classes (MBC), tea and ex-tea garden tribes, people residing on islands, etc. in addition to the SECC list.

In the 2019-20 budget, the government is estimated to spend Rs 32,989 crore on cooking gas subsidy, which is 63% higher than the revised estimates of 2018-19, according to IndiaSpend’s analysis.

“I am glad to see the increase in allocation. It is likely that the increase is directly a function of the increase in beneficiaries,” said Santosh Harish, fellow at the Centre for Policy Research (CPR), a Delhi-based think-tank. Harish is also the editor of CCAPC.

Under the Ujjwala scheme, the government gives women from below-poverty-line (BPL) households their first cooking gas connection. The connection includes a cylinder, regulator and connecting tube.

The government pays for the upfront cost of the connection, around Rs 1,600, to the cooking gas agency concerned. It is repaid by the households later as monthly installments that come from the Rs 200-Rs 300 subsidy provided for refills. However, here is the catch: until the amount of Rs 1,600 is recovered by the gas agencies, these poor households do not get the per-cylinder subsidy credited through DBT in their bank accounts.

It can take six to 10 refill cylinders for these households to repay this loan. Meanwhile, they are forced to buy refills by paying the market rates upfront. It can cost between Rs 700 and 900 per cylinder, due to changing prices in the international fuel market. This is unaffordable for the poor households, as it is up to 25% of their monthly family income, IndiaSpend found in its April 2019 ground reports from Rajasthan, Maharashtra and West Bengal, which can be read here and here.

Ujjwala beneficiaries having to pay the market rate for refills is a “structural” flaw in the scheme’s design, and a key reason why poor families are unable to sustain their cylinder use, IndiaSpend reported, citing a 2018 article from the Economic & Political Weekly.

This also means that poor households under Ujjwala, for the period of loan repayment, pay more for refills than richer households.

Starting from April 2018, the government, however, is trying to bridge this gap by allowing households to defer their loan repayment upto six refills or one year.

Even after loan repayment, a poor household will have to pay the upfront cost of the refill cylinder first and the subsidy gets credited to their bank accounts later, due to the design flaw. “Therefore, when non-subsidised cooking gas price is high, the poor household finds it difficult to pay the full market price at the time of purchase and gets demotivated to use cooking gas even though the government subsidy is deposited quickly in the consumers’ bank account,” said the policy brief.

Therefore, the amount of subsidy should be based on the household’s willingness to spend for cooking gas--roughly 4% of a poor household’s monthly income, said the paper quoting a 2016 survey by CRISIL, a market analysis company. 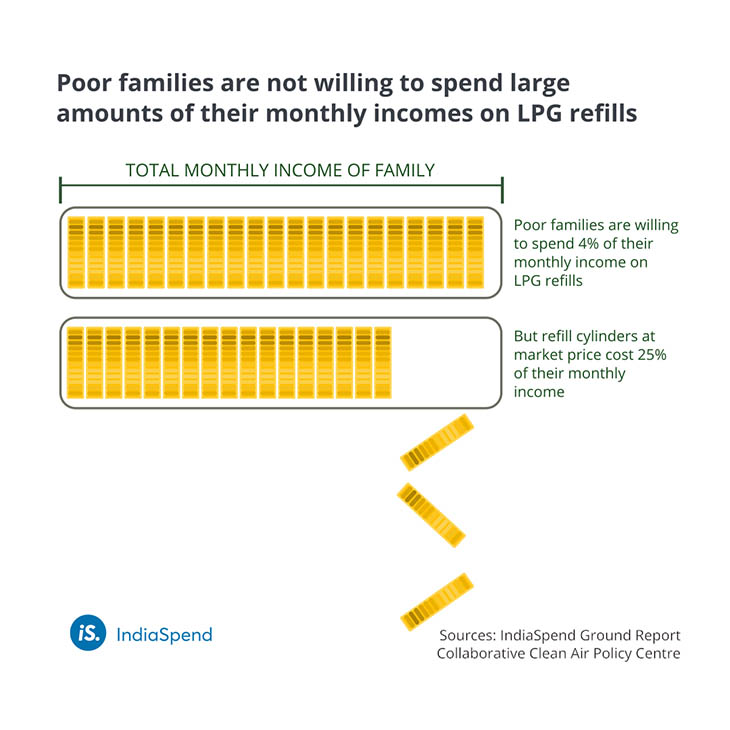 For example, in March 2019, when cooking gas rates for a 14.3 kg cylinder were Rs 701, the central government provided a Rs 206 subsidy to get the subsidised rate of a cylinder to Rs 495. If this subsidised rate comes down to Rs 350, poor households would more likely switch to cooking gas as a primary cooking fuel, said the brief. 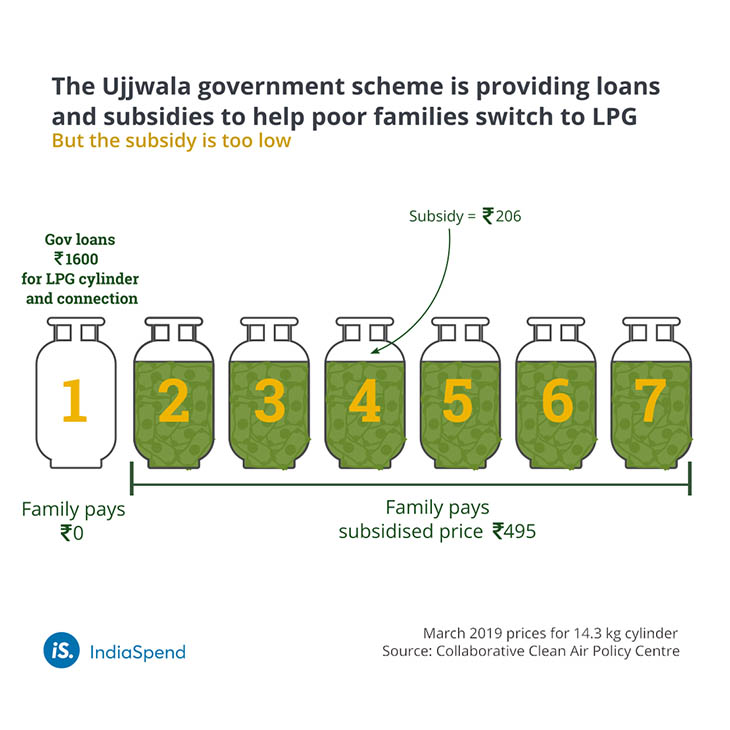 Will limiting the cooking gas subsidy only to poor houses help?

The survey quoted in the policy brief (see the table below) also shows that the poorest two-quintile classes require cooking gas prices to be lower than the present subsidised price of Rs 495 per kg to keep their cooking gas costs within 4% of their overall monthly expenditure. However, for the richest quintile, the same calculation suggests that these households do not require subsidies.

The table, as per the brief, also shows: 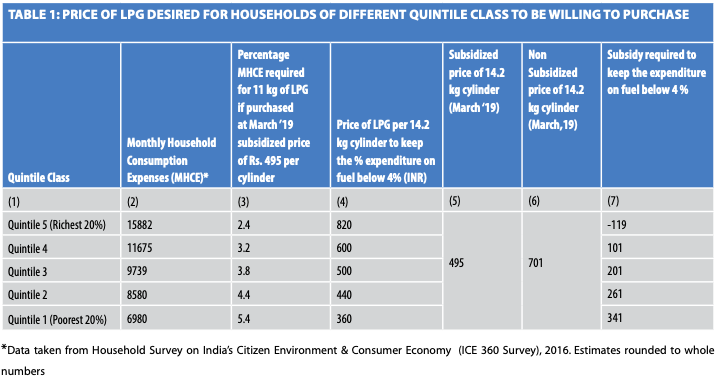 Hence, the provision of universal subsidy should be scrapped as it reduces the subsidy rate, because the overall amount available for subsidy is shared across a large number of beneficiaries. Universal subsidy is also “regressive” as it makes cooking gas “unaffordable for the poor, while the benefits accrue to the relatively wealthy”, said the brief.

For better targeting of the subsidy, the government has initiated steps such as the “Give It Up” campaign in 2015, which resulted in more than 10 million middle-class households surrendering their subsidies. The government also excluded from cooking gas subsidy those who earn Rs 10 lakh or more per annum. These steps, however, “are not sufficient to focus the subsidies on the poor entirely” because the income threshold is fixed so high that most cooking gas consumers are still entitled to receive the subsidy, as per the brief.

Therefore, Ujjwala should have a two-tier, differential pricing for households: a lower price (or a higher subsidy) for the poor identified from the SECC list, and a higher price (lesser or no subsidy) for other consumers, recommends the brief.

If the government restricts the cooking gas subsidy to the households thus identified, more than 65% consumers will be removed from the list. This targeting will significantly reduce the financial burden on the government, even if the quantum of subsidies to poor households is increased, said the brief.

For example: cooking gas subsidy on nine cylinders, at Rs 350 per cylinder (as recommended above) to 87.3 million SECC households will put a Rs 27,500 crore ($4 billion) financial burden on the government, as per the brief. This is 58% lower than the current subsidy burden of around Rs 65,000 crore ($9.4 billion), estimated as per the current practice of giving 12 subsidised cooking gas cylinders with a per-cylinder subsidy of Rs 205 to all of India’s 280 million households with an cooking gas connection, it said.

A criticism of differential pricing in the market is the opportunity for diversion of lower-priced cooking gas to the non-subsidised commercial market, the brief said, adding that the DBT scheme will ensure against any subsidy leakage.

Experts, however, suggest that removing wealthier families from the cooking gas subsidy ambit could prove futile. “Given such wide solid fuel use even among richer households, it seems that increasing the price of a refill for them would be counterproductive,” said Ashish Gupta, research fellow at the Research Institute for Compassionate Economics (RICE), a non-profit research organisation.

“I think that we should experiment with further reducing the price of a refill for all rural households. I also think that for a small subset of very poor households, the cylinder should be much cheaper (or almost free),” Gupta said, adding that given the large health benefits of using cleaner fuels and the relatively small expenditures on cooking gas subsidies, fiscal considerations should not be given too much weight.

Cost and affordability or poverty is certainly important, but there are other important factors behind people choosing biomass over cooking gas including gender inequality (women do the cooking with solid fuels), and beliefs regarding the ease, taste and health impacts of cooking with solid fuels versus cooking gas (people think chulha food is tastier and healthier), said an April 2019 RICE study that Gupta co-authored.

Most rural households can gather free solid fuels--firewood, dung and agricultural residue--in their neighbourhood, and an cooking gas refill is considered an expensive alternative. Even in the richest rural asset decile, no more than 40% of households used cooking gas exclusively, as per the RICE study. This calls for generating awareness of the harms of burning solid fuels and encouraging men to cook, said Gupta.

The government should not see the potentially increased subsidies on cooking gas for the poor as a burden because it has substantial health benefits, according to the CCAPC brief.

Using these numbers, the brief calculated that even by the most conservative estimates, the health value of a single cooking gas cylinder can vary between Rs 3,800 and Rs 18,000, said the brief, which is “far greater” than the Rs 350 per cylinder subsidy. “Therefore, the subsidy to poor households should be considered as a social investment,” it added. 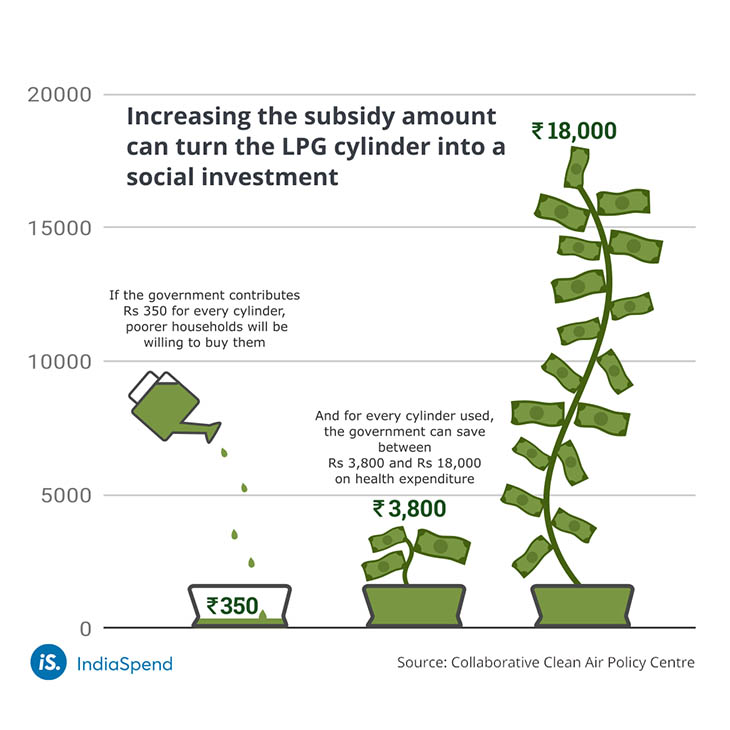 Now, the question is how much effect would mitigating household biomass burning have on air pollution? If emissions of PM 2.5--inhalable particles 30 times finer than a human hair that can enter the bloodstream and cause illness--from all household sources are mitigated, 58% of the 597 districts of the country will meet the national safe air standard, an increase from 41% in 2015. Another 187 million people will breathe safe air, according to this April 2019 paper published in Proceedings of the National Academy of Sciences (PNAS), a US-based peer-reviewed journal.