India has started relaxing lockdown measures in select regions not affected by COVID-19. The disease has now infected 18,601 people in India and killed 590. India has been under lockdown since March 25, which has been extended to May 3. 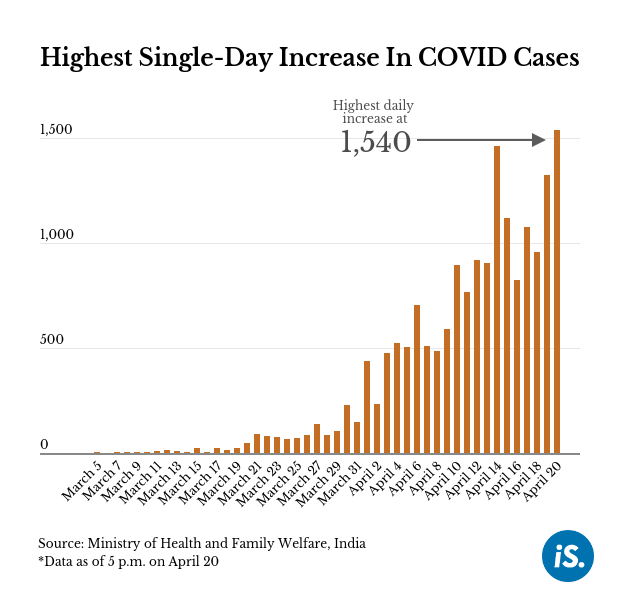 But as the government gradually tries to bring back normalcy, the week gone past has reported five of the highest single-day increases in any week. Yet, the government said, the country’s doubling rate has “improved from 3.4 days before lockdown to 7.5 days”, as per Lav Agarwal, joint secretary at the Union health ministry.

States/UTs with doubling rate of less than 20 days:

Like India, countries around the world, including China and Germany and other European countries, are also lifting restrictions, prompting the World Health Organization (WHO) to advise caution. “We want to re-emphasize that easing restrictions is not the end of the epidemic in any country,” said Tedros Ghebreyesus, the director-general, on April 20. “So-called lockdowns can help to take the heat out of a country’s epidemic, but they cannot end it alone. Countries must detect, test, isolate and care.”

"We want to re-emphasize that easing restrictions is not the end of the epidemic in any country. Ending the epidemic will require a sustained effort on the part of individuals, communities and governments to continue suppressing and controlling the virus"-@DrTedros #COVID19

Kerala has been among the states to ease lockdown measures from April 20. But its earlier announcement that barber shops, workshops, restaurants and book shops would reopen earned it a rebuke from the home ministry.

An April 19 directive said the state must ensure that lockdown measures are not diluted, and the state government said it would amend the order.

Following the Centre’s action on Kerala, Karnataka, which was expected to relax measures from April 22, has deferred its decision.

India’s testing numbers are still being watched closely. Only one in 24 COVID-19 samples in India are testing positive, said the Indian Council of Medical Research (ICMR) on April 16, implying that India is conducting as many tests as it needs to.

IndiaSpend analysed testing data from 23 states and union territories and found that the four that have detected the most COVID-19 cases have a higher percentage of positive samples. Delhi has tested 1,105 samples per million people--the highest among states with more than 100 COVID-19 cases--our analysis of testing data from 14 states found. At 96.5, Delhi also has the most cases per million people.

But there have been questions on the efficacy of rapid antibody tests and the quality of kits in India. “World over, rapid antibody tests are not used for diagnosis of an individual. We still do not know how powerful the antibody developed [in the body] for the virus is,” said Raman Gangakhedkar of ICMR during a press conference on April 20.

The WHO chief also spoke on similar lines: “[W]hile antibody tests are important for knowing who has been infected, tests that find the virus are a core tool for active case finding, diagnosis, isolation and treatment." The WHO has questioned the accuracy of rapid antibody tests, which countries plan to deploy in the millions as they lift restrictions, we reported on April 18.

There have also been complaints regarding the accuracy of RT-PCR kits--in West Bengal. The kits are of good quality and US FDA-approved, Gangakhedkar said, but must be stored below 20 degrees Celsius or the “results may not be correct".