Air Pollution Killed A Newborn Every 5 Minutes In 2019

New Delhi: Air pollution killed about 116,000 infants in India within the first month of being born, found a new global study into air pollution’s burden on health worldwide.

More than half of the infant deaths were due to PM 2.5 (particulate matter 30 times finer than human hair than enters the bloodstream and causes severe health risks) in outdoor air and the rest were linked to household air pollution due to use of solid fuels such as charcoal, wood and animal dung for cooking, found the State of Global Air 2020 report (SoGA 2020) released on October 21. The report published by the US-based think-tank, Health Effects Institute, claims to be the first-ever comprehensive analysis of air pollution’s global impact on newborns.

For the youngest infants, most deaths were related to complications from low birth weight and premature birth--direct outcomes of mothers’ exposure to air pollution during pregnancy, found the study. Babies born with a low birth weight are more susceptible to childhood infections and pneumonia. The lungs of pre-term babies can also not be fully developed. There is a growing body of evidence about the link between infant death and air pollution and several Indian (here) and international (here) studies have also tried to explain it (here and here).

“By limiting the growth and development of babies and children, air pollution lowers their lifelong health and productivity,” Dean Spears, founding executive director, research institute for compassionate economics (r.i.c.e), told IndiaSpend. “Yet, the consequences of air pollution for children do not get the attention that they deserve.” Spears has spent years studying the impact of air pollution on children in India and has also authored a book on the subject.

Children’s early-life health directly impacts their adult economic productivity and the harm done to children makes air pollution such an economic cost that addressing the problem could be an economic policy that pays for itself, said Spears. His research--included in his book--found that children born in places and times when the air pollution was especially bad grew up to be not as tall as children born in less-polluted times in the same locality.

“An infant’s health is critical to the future of every society, and this newest evidence suggests an especially high risk for infants born in South Asia and sub-Saharan Africa,” said Dan Greenbaum, president, Health Effects Institute, in a statement on October 21. Health Effects Institute has brought out the annual SoGA reports in partnership with the Institute for Health Metrics and Evaluation’s (IHME) Global Burden of Disease project since 2017.

“Although there has been slow and steady reduction in household reliance on poor-quality fuels, the air pollution from these fuels continues to be a key factor in the deaths of these youngest infants,” Greenbaum added.

In India, long-term exposure to outdoor and household air pollution contributed to over 1.67 million annual deaths, across all age groups, from stroke, heart attack, diabetes, lung cancer, chronic lung diseases and neonatal diseases in India in 2019, said the SoGA 2020 report.

Globally, air pollution is estimated to have contributed to 6.67 million deaths in 2019, nearly 12% of the total global deaths. It was the fourth leading risk factor for early death worldwide in 2019, surpassed only by high blood pressure, tobacco use and poor diet, found the report.

This report comes at a time when COVID-19 has claimed more than 115,000 lives in India. And evidence suggests that people with heart and lung conditions are vulnerable to a more severe form of COVID-19.

Furthermore, India is moving into the winter, which exacerbates air pollution in several Indian cities already infamous for high levels of air pollution and smog, especially in the north.

Since evidence has clearly linked air pollution and increased risk of heart and lung diseases, there was growing concern that exposure to high levels of air pollution during winter months could exacerbate the effects of COVID-19, the Health Effects Institute statement said.

In 2019, air pollution contributed to nearly 500,000 infant deaths worldwide. In India, a fifth of neonatal deaths from all causes can be attributed to air pollution. In sub-Saharan Africa, the percentage is nearly 30%--the highest.

The first month is already a vulnerable time for newborn babies. But a growing body of scientific evidence from multiple countries, including India, indicates that particulate air pollution exposure during pregnancy is linked to low birth weight and premature birth, factors that account for the vast majority of deaths in the neonatal period.

The study defines low birth weight as weighing less than 2.5 kg at birth, while premature birth is defined as being born before 37 weeks of gestation (the period that the child is carried in the mother’s womb). Full term of pregnancy is 38 to 40 weeks.

These conditions, which are related because babies born too early are often small, make infants more susceptible to a range of diseases with a high death rate or higher risks of long-term disabilities, said the study.

For example, they are linked to a higher risk of lower-respiratory tract infections, diarrhoeal diseases, and other serious infections as well as brain damage and inflammation, blood disorders, and jaundice, it added.

The risks could follow children throughout the lifecycle. “If these babies survive infancy, they remain at a higher risk for not only lower-respiratory infections and other infectious diseases throughout early childhood but also for major chronic diseases throughout life,” the study said.

“Addressing impacts of air pollution on adverse pregnancy outcomes and newborn health is really important for low- and middle-income countries,” said Kalpana Balakrishnan, an independent expert who has done extensive work on the relationship between air pollution and health for nearly two decades. “This [addressing air pollution’s impact on foetuses in the womb] is important for countries not only because of the high prevalence of low birth weight, pre-term birth and child growth deficits but because it allows the design of strategic interventions that can be directed at these vulnerable groups.”

One trouble in tackling air pollution is the fact that it is not altogether ignored, said Spears. “Instead too many policymakers announce showy policies each winter that attract public attention without actually resolving this enduring threat,” he said referring to India’s policies.

Burden of disease from PM 2.5 pollution

To assess the annual air pollution levels, SoGA report used PM 2.5 as an indicator. Emitted from vehicles, coal-burning power plants, industrial activities, waste burning, and many other human and natural sources, exposure to levels of PM 2.5 over the course of several years has been the most consistent and robust predictor of mortality from cardiovascular, respiratory, and other types of diseases, the study said.

In 2019, India’s age-standardised PM 2.5-attributable death rate was among the highest at 96 deaths per 100,000 people. This was higher than the current death rate of nearly 75 per 100,000 population for several major infectious diseases combined, including tuberculosis, HIV, malaria, dengue and yellow fever, showed data from the World Health Organization (WHO).

In 2019, India’s population-weighted annual average concentration of PM 2.5 was recorded at 83.2 microgram per cubic metre (μg/m3)--seven times higher than the WHO’s safe standards of 10 μg/m3--and remained highest in the world. (The ‘population-weighted annual average concentration’ is the average level of air pollution to which a country’s population is exposed. Since pollution levels as well as population sizes vary within countries, this metric enables fair comparisons between countries.)

Nearly 600,000 Indians died due to indoor or household air pollution in 2019 while there were 2.31 million deaths globally, as per the report. 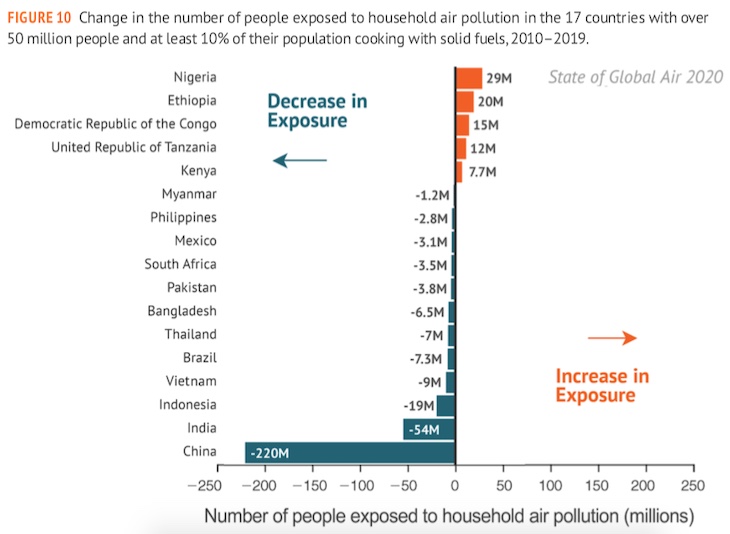 However, that still leaves 49% of the world’s population--about 3.8 billion people--exposed to household air pollution from the burning of solid fuels.