Mumbai: Indian cities dominate a new ranking of the world’s most polluted cities in 2018, claiming 15 of the top 20 spots, according to a new report released today by the NGO Greenpeace and IQ AirVisual, an online aggregator of real-time air quality information.

Six cities in the National Capital Region (NCR)--Gurugram, Ghaziabad, Faridabad, Bhiwadi, Delhi and Noida--represent almost half the number of Indian cities in the top 20. Gurugram was the most polluted city in the world in 2018, closely followed by Ghaziabad, recording 135.8 μg/m3 average daily PM 2.5 levels, more than 13 times the limit of 10 μg/m3 recommended by the World Health Organization (WHO).

PM 2.5 refers to particulate matter measuring up to 2.5 microns in size, small enough to “penetrate deep into the human respiratory system and from there to the entire body, causing a wide range of short- and long-term health effects”, the report said. PM 2.5 is known to pose the greatest risk to human beings, potentially leading to cardiovascular and respiratory disease, and cancers.

While Delhi “typically receives most media coverage as one of the world’s ‘pollution capitals’”, there are other cities in northern India and Pakistan recording higher annual average PM 2.5 levels, the report notes. Patna (7th) and Lucknow (9th), both outside the NCR, rank higher than the capital, but receive markedly less attention in the national media, suggesting that there may be other air pollution hotspots going unnoticed.

Indeed, Thane near Mumbai in Maharashtra showed the worst air quality in the country today (March 5, 2019), according to the IQAir Air Visual website, a centralized platform for global and hyper-local air quality information in real-time, which was used to compile the report. The city recorded a “hazardous” figure of 354 on the US Air Quality Index (AQI) scale, which uses a colour-coded scale between 0-500 to communicate health risks. 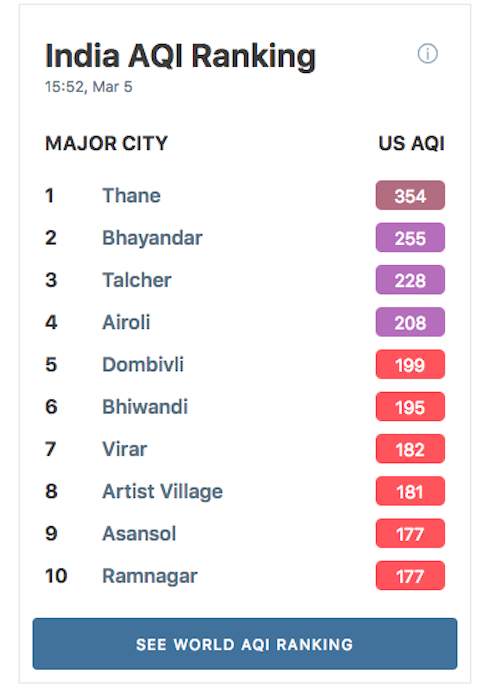 PM 2.5 levels above 250 μg/m3, or 25 times the WHO level, are placed in the 300+, purple and ‘hazardous’ category. At this level, the index warns, the “general public is at high risk to experience strong irritations and adverse health effects. Everyone should avoid outdoor activities”.

“Delhi may be getting all the focus and attention, but there is no doubt this is a national issue and that’s the narrative we’ve been trying to build,” Nandikesh Sivalingam, programme manager at Greenpeace East Asia, told IndiaSpend. “In 2015, there were hardly 38 monitoring stations around the country, but that figure has now increased to between 120 and 130, so now more data is getting out into the open.”

In January the government launched the National Clean Air Programme, which intends to increase the country's monitoring capacity further, Sivalingam said, adding, “With initiatives like this, national awareness of the situation is increasing.”

People living in eight out of 10 Indian cities are currently breathing toxic air, while a further half a billion people live in districts where air quality data are not available, IndiaSpend reported in February 2018. Current estimates suggest air pollution caused one in every eight deaths in India in 2017, a total of 1.24 million deaths.

“Air pollution steals our livelihoods and our futures, but we can change that,” said Yeb Sano, executive director of Greenpeace South East Asia. “In addition to human lives lost, there’s an estimated global cost of $225 billion in lost labour, and trillions in medical costs.”

“We want this report to make people think about the air we breathe,” he added. “Because when we understand the impact of air quality on our lives, we will act to protect what’s most important.”

With 18 out of the 20 most polluted cities found in India, Pakistan and Bangladesh, evidence of a South Asian air quality crisis emerges from the data set out in the report.

“Vehicle exhaust, open crop and biomass burning, industrial emissions and coal combustion” are the major contributors to high PM 2.5 levels in the region, the report said. 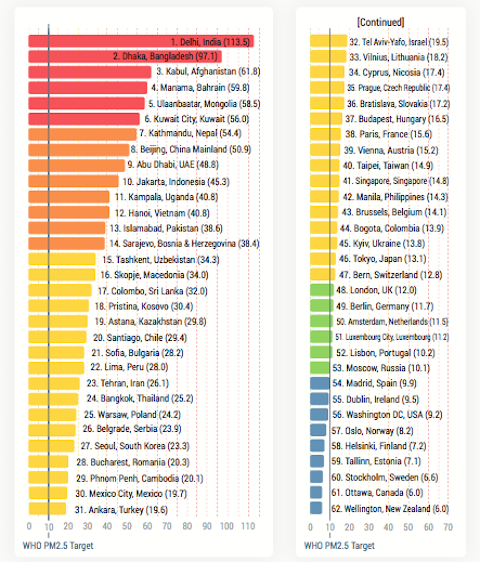 While countries in Asia and the Middle East feature most frequently at the top of the ranking, “only 9 out of 62 regional capitals have an annual mean PM2.5 level within the WHO air quality guideline of 10 μg/m3”, indicating that much of the global population is breathing unsafe air.

However, a dearth of data, in particular from South American and African countries, means

information on air quality in many populated areas is still lacking, the report said. While this is not only problematic for forming a global picture on air pollution, access to real-time, public information is also needed to “empower populations to respond to current conditions and protect human health”.

Critical Need for Air-Monitoring Stations in Africa and South America 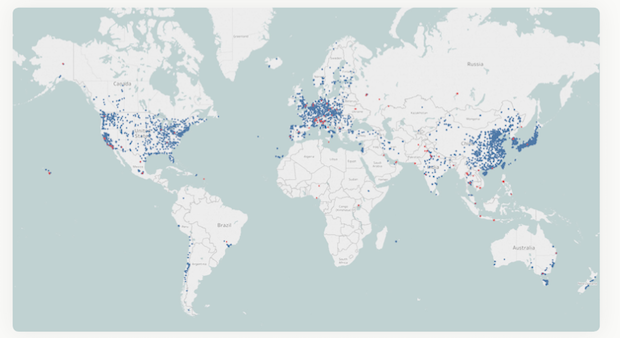 With “one of the most comprehensive air quality monitoring programmes” in the world that provides access to real-time air quality information, China is seen as “leading the way” in improving air quality in its major cities, the report said.

Average PM 2.5 concentration fell by 12% in China’s cities between 2017 to 2018 and “Beijing now ranks as the 122nd most polluted city in the world in 2018”, highlighting the progress made by a country which used to consistently grab global headlines for dense smog and rocketing AQI readings.

India’s National Clean Air Programme (NCAP), mentioned earlier, launched by the environment ministry earlier this year, contains a similar initiative for “augmenting the air quality monitoring network across the country and strengthening the awareness and capacity building activities”. The plan was a much-awaited response by the central government to the nation’s highly visible and deteriorating air quality, and aims to reduce PM 2.5 and PM 10 concentration by 20-30% by 2024.

“One clear thing China was able to do in about five years, and which led to significant gains, was to reduce emissions from the power sector,” said Sivalingam. “India has the same issues and now needs to look at these sectors and make sure they comply with rules set out in the NCAP.”

However, implementation is always the problem in India, Sivalingam said, “So while initiatives contained in the NCAP mean we are optimistic for progress, they have to be backed up with action on the ground. It’s too early to say right now how well the plan is being implemented, so we will have to wait and see.”

However, the NCAP has been stumbling right off the starting line, as IndiaSpend reported on February 6, 2019, because it lacks a legal mandate, does not have clear timelines for its action plan, and does not fix accountability for failure.

“The Chinese plan had a few critical aspects which we are still missing in the National Clean Air Programme,” Sunil Dahiya, senior campaigner, Greenpeace India, told IndiaSpend, “such as specific pollution reduction targets for cities, emission reduction targets for polluting sectors, as well as a stringent legal framework for ensuring implementation and accountability.”

These steps have to be included in the NCAP if India is to move toward breathable air quality, Dahiya added.