3mn tests so far, but testing is growing slower than case tally

Only 36% of these 3 million tests have taken place in the four states where 67% of India’s confirmed cases have been detected--Maharashtra, Tamil Nadu, Gujarat and Delhi. Between April 14 and May 27, 2020, in the most affected states, the number of samples tested increased at an average daily rate of 6.2%, slower than the daily case growth of 7%.

Between April 14 and May 27, 2020, the increase in the number of samples tested and cases confirmed has followed a similar trajectory in Maharashtra, Delhi and Gujarat. While the daily rate of increase in cases averaged at 7.1%, the number of samples tested increased by 5.6% every day, on average, in these states during this period. These figures are based on three-day moving averages of testing and case statistics to smooth daily fluctuations.

In May 2020, the trend in Tamil Nadu started to resemble that in other states, with samples tested growing at a slower daily rate of 5.2%, on average, compared to a daily increase of 8.4% in confirmed cases.

Total Confirmed Cases Versus Samples Tested, April 14 and May 27 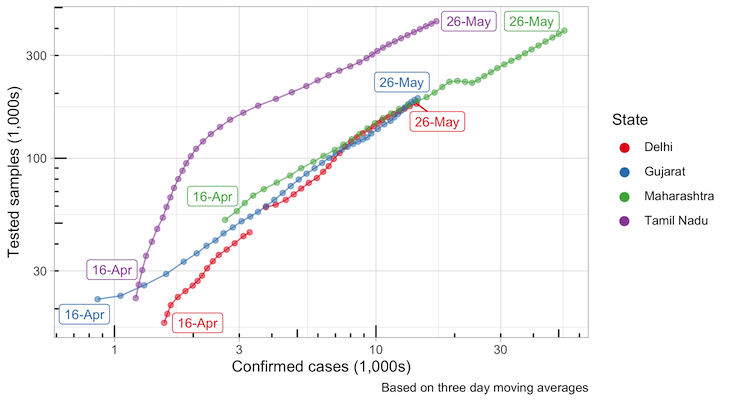 Source: National data from the Indian Council of Medical Research. State data from health departments: Maharashtra, Tamil Nadu, Delhi, and Gujarat.
Note: Delhi state health bulletins for April 30 and May 1 did not include data on testing

Overall, India tests 2.4 samples for every 1,000 people, the lowest rate in worst-affected countries. The number of samples tested per confirmed case fell from 26 on April 14 to 21.4 on May 27, 2020, a reflection of the slower growth of testing versus confirmed cases.

All four states have been testing at a rate higher than the national average. Maharashtra’s testing rate is 2.9 per 1,000 population, Tamil Nadu’s 5.3, Delhi’s 8, and Gujarat’s 2.9. Of these four states, only Tamil Nadu’s positivity rate is lower than the national average. It tests 26.4 samples for each confirmed case. Maharashtra finds a positive result for every 7.7 samples, Delhi 14.2, and Gujarat 20.2.