While populations between the states and countries under consideration are comparable, these countries have higher gross domestic product (GDP) per person than the states.

The map below shows how states compare in the COVID-19 testing rate, case rate, and positivity ratio of tests with countries that have comparable population sizes.

Sources: Indian Ministry of Health and Family Welfare, Our World In Data. Population data from UIDAI for India and World Bank for other countries.
Note: Data for confirmed cases as of May 22, 2020 for countries and May 23 for states. Data on testing as of May 10 for Germany, May 22 for Russia, Iran, Turkey, Italy, Pakistan, Ecuador and Peru. State testing data for Maharashtra, Madhya Pradesh, Rajasthan, Tamil Nadu, Gujarat, Punjab, and Uttar Pradesh as of May 23, 2020 and May 20 for Delhi.

Overall, India has tested over 2.5 million samples over the past two months, as IndiaSpend reported on May 21.

Usually, a country’s testing rate is based on the number of individuals tested. In India, the Indian Council of Medical Research (ICMR) reports the number of samples tested, which is larger than the number of tested individuals since the COVID-19 test may be administered multiple times on one person. For instance, those admitted in hospital must test negative after the resolution of symptoms to be discharged.

India tests 22.7 samples for every confirmed case of COVID-19, more than the samples reported by other countries with over 100,000 confirmed cases.

Indian states too have a wide variation in the positivity rate of samples. Maharashtra finds a positive case after testing 7.4 samples, in line with the US and UK, followed by Gujarat (13), and Delhi (14).

Madhya Pradesh (21) and Tamil Nadu (27) have to test many more samples for one positive sample, and are closer to Russia’s rate. West Bengal and Uttar Pradesh, which have lower testing rates, report a confirmed case per 38 and 36 samples tested.

“There is wide variation in the figures across states. Since the rate of sampling is so low, these could largely be driven by random fluctuations,” said Sitabhra Sinha, professor of computational biophysics at the Institute of Mathematical Sciences. There is also a possibility that the virus spread in India has been slower than in other countries, he noted, citing early research on how many people, on average, one COVID-19 patient could spread the infection to. 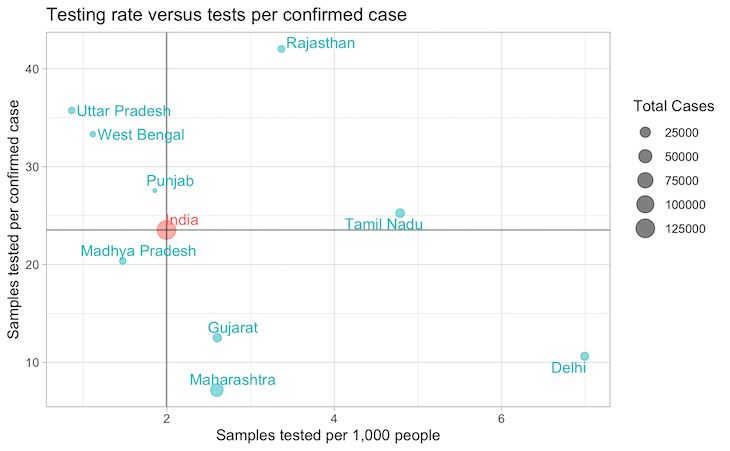 Source: National data from the Indian Council of Medical Research. State data from health departments.
Note: Maharashtra, Madhya Pradesh, Rajasthan, Tamil Nadu, Gujarat, Punjab, and Uttar Pradesh as of May 23, 2020 and May 20 for Delhi.

In a perfect setting, the case positivity rate would help understand the spread of the disease in a population. But India’s reported COVID-19 data may not capture the virus’ spread since testing capacity is limited and the current testing strategy only allows for testing of symptomatic patients and asymptomatic people who were in contact with a known COVID-19 case. This could potentially lead to the omission of asymptomatic and mild cases from the final count, as IndiaSpend reported on May 18.

“The expansion of the testing regime to include influenza-like illness (ILI) symptoms is relatively recent and the definition remains restrictive,” said Gautam Menon, professor of physics and biology at Ashoka University. He is referring to the addition of patients with ILI--symptoms including acute respiratory infection with fever exceeding 38◦C and cough--in the testing criteria on May 18.

A low positivity rate could also show poor tracing of the contacts of a confirmed COVID-19 patient.

“These [positivity rate] numbers are influenced by the background prevalence of the infection and strength of health systems’ response,” said Giridhar R. Babu, professor and head of lifecourse epidemiology at the Public Health Foundation of India. In areas with low overall testing, such as West Bengal and Uttar Pradesh, a higher number of samples per confirmed case may be a result of improper sampling as not all at-risk individuals are being tested, he noted.