14 Years On, No State/UT Has Fully Implemented SC-Mandated Police Reforms

Mumbai & Bengaluru: No Indian state is fully compliant with 14-year-old Supreme Court directives for police reforms, an analysis by the international non-profit Commonwealth Human Rights Initiative (CHRI) has found. Of the 28 states, only two--Andhra Pradesh and Arunachal Pradesh--were partially compliant with the five binding directives included in the analysis. All the other states have failed to comply, as per CHRI's report.

The set of seven directives, aimed at kick-starting reforms, was introduced based on a public interest litigation (PIL) filed in 1996. Despite various National Police Commission recommendations made since 1979, successive governments did not implement major recommendations. The 1996 PIL, filed by two former director generals of police, Prakash Singh and NK Singh, asked the Supreme Court to direct governments to implement the recommendations. A decade later, the court ordered that these seven directives be implemented.

The seven directives provide "practical mechanisms to kick-start reform", a 2010 CHRI report noted. The recent analysis by the non-profit graded the states/UTs on compliance on five directives. Since directive 7 comes under the purview of the Centre, it has not been included. Similarly, directive 4 was not included as assessing the compliance of separation of investigation and law-and-order functions "will require field-level examination". 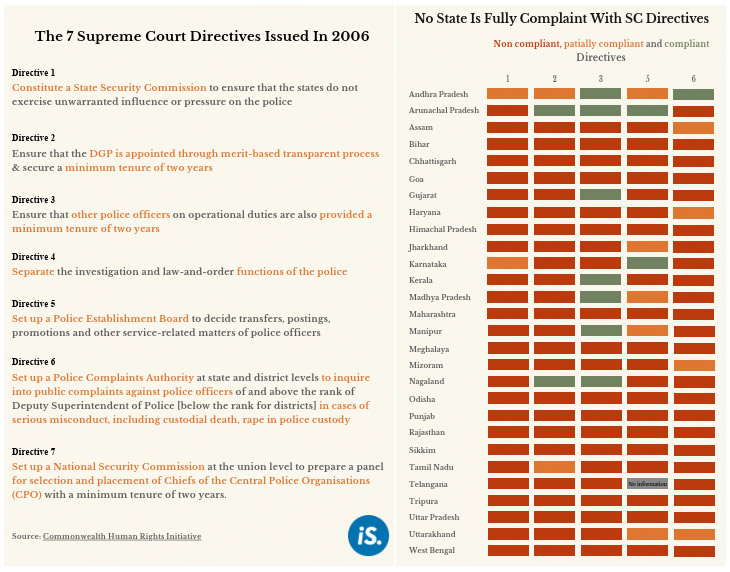 The first directive deals with the formation of a state security commission (SSC) and any state that has not constituted such a commission, or fulfilled the norms for its composition or made its recommendations binding, has been marked as non-compliant. While 93% of states have constituted an SSC, only Andhra Pradesh and Karnataka have made SSC recommendations binding on the state government, found the analysis.

The commission's purpose is to "ensure that the State Government does not exercise unwarranted influence or pressure on the state police". One in three police personnel in India report experiencing political pressure in the course of crime investigations. In case of crimes involving influential persons, 38% personnel report having faced such pressure.

A transfer is the most common consequence of not complying with these pressures, said 63% of police personnel, as per 'Status of Policing in India Report 2019' report by Common Cause and Lokniti–Centre for the Study Developing Societies, a nonprofit and a think-tank, respectively, based in New Delhi.

Most states have also failed to comply with directives that mandate minimum tenure for police officers, found the analysis by CHRI. Only five of the 28 states include shortlisting by the Union Public Service Commission (UPSC) for selection and six have provided a minimum tenure of two years to the director general of police as stated under the second directive. Only two states--Arunachal Pradesh and Nagaland--fully comply with this directive.

Amongst all directives, most states (seven) have complied with directive 3, which prescribes a minimum tenure of two years for the inspector general of police and other officers. The seven states in compliance are Andhra Pradesh, Arunachal Pradesh, Gujarat, Kerala, Madhya Pradesh, Manipur, and Nagaland.

The guaranteed minimum tenure of two years was introduced to limit political interference in posting and transfer of officers and to grant them operational autonomy. However, over a decade to 2016, 18% senior superintendents of police and deputy inspectors general have been transferred in less than two years, on average, per Common Cause report.

All states, except Telangana, have constituted police establishment boards to decide transfers, postings, promotions and other service-related matters of police officers, as made mandatory by directive 5. However, only two states--Arunachal Pradesh and Karnataka--fulfil the requirements of composition, functions and powers of the boards.

The sixth directive mandates the formation of a police complaints authority (PCA) to look into complaints against police officers from the public in cases of serious misconduct and select types of misconduct. Only 10 states make PCA recommendations binding and eight states specify a selection panel for the selection of independent members of the PCA.

Torture is "routine" in police custody, experts say, as IndiaSpend reported in August. In seven months to July, the National Human Rights Commision reported 914 deaths in custody (judicial and police), 53 of these in police custody. Further, one out of five police personnel felt that killing dangerous criminals is better than a legal trial while three out of four personnel felt that it is justified for the police to be violent towards criminals.

All union territories (UTs) are non compliant with most of the directives. The Ministry of Home Affairs has constituted one SSC for Delhi and one for all the other UTs combined, the CHRI analysis noted. Further, after the enactment of Jammu and Kashmir Reorganisation Act, 2019, the Centre has not issued orders on the implementation of the Supreme Court directives.

(Shreya Raman is a data analyst and Paliath is a policy analyst with IndiaSpend.)