New Delhi: Every second Indian police person thinks Muslims are “naturally prone towards committing crime”, while about a third think the same of Dalits and tribals, a new survey has revealed. Further, 53% think cases filed under the Scheduled Caste/Scheduled Tribes (Prevention of Atrocities) Act are “false and motivated”.

About 41% police persons (men and women) felt women cannot work alongside men in the police force due to various reasons.

The survey, conducted by Common Cause and Lokniti–Centre for the Study Developing Societies, a nonprofit and a think tank, respectively, based in New Delhi, was part of the ‘Status of Policing in India Report 2019’, released on August 27, 2019. Researchers interviewed 11,834 police personnel across 105 locations in 21 states between February and April 2019. The survey covered the personnel’s opinions over adequacy of police infrastructure and their perception of several types of crime and different sections of society.

The question posed in the survey about police personnel’s perception of Muslims, Dalits and tribals was: “In your opinion, to what extent are people from the following communities naturally prone towards committing crimes?” The communities listed include Dalits (Scheduled Castes or SCs), Adivasis/tribals (Scheduled Tribes or STs) and Muslims.

The choices given to the respondents were “very much”, “somewhat”, “rarely” and “not at all”.

On the question of women in the police force, respondents were asked to respond to three statements: “Being in the police requires physical strength and aggressive behaviour which women lack”; “Women police are incapable of handling high intensity crimes and cases”; “Because of inflexible working hours, it is not alright for women to work in the police force as they cannot attend to homely duties”.

The choices given to the respondents were “fully agree”, “somewhat agree”, “fully disagree” and “somewhat disagree”.

Some highlights of the survey: 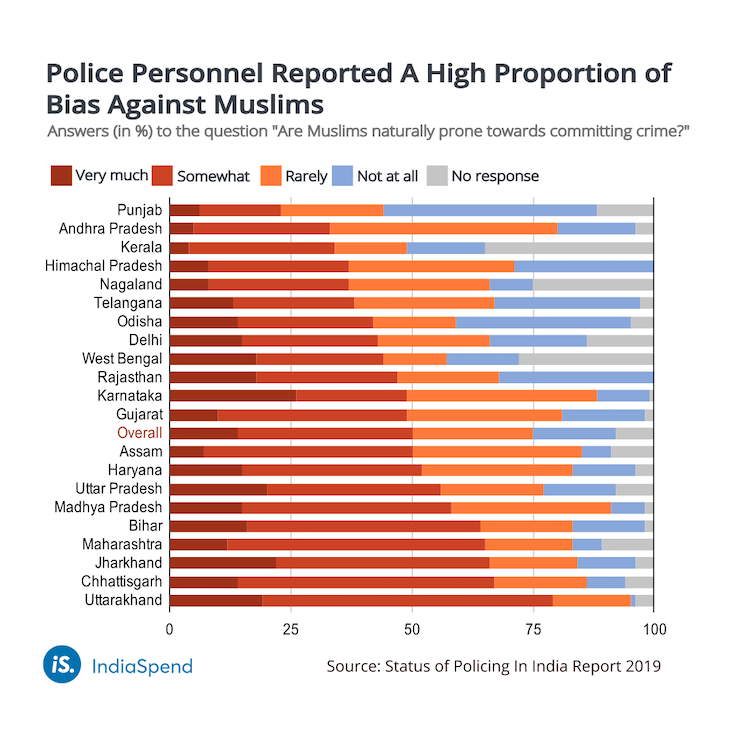 Maharashtra had the highest percentage (60%) of personnel who think Dalits are “naturally prone towards committing crime”: while 10% said “very much”, 50% said “somewhat”. Uttarakhand (57%) and Uttar Pradesh (54%) followed. West Bengal had the lowest percentage (11%), followed by Kerala (16%) and Himachal Pradesh (19%). 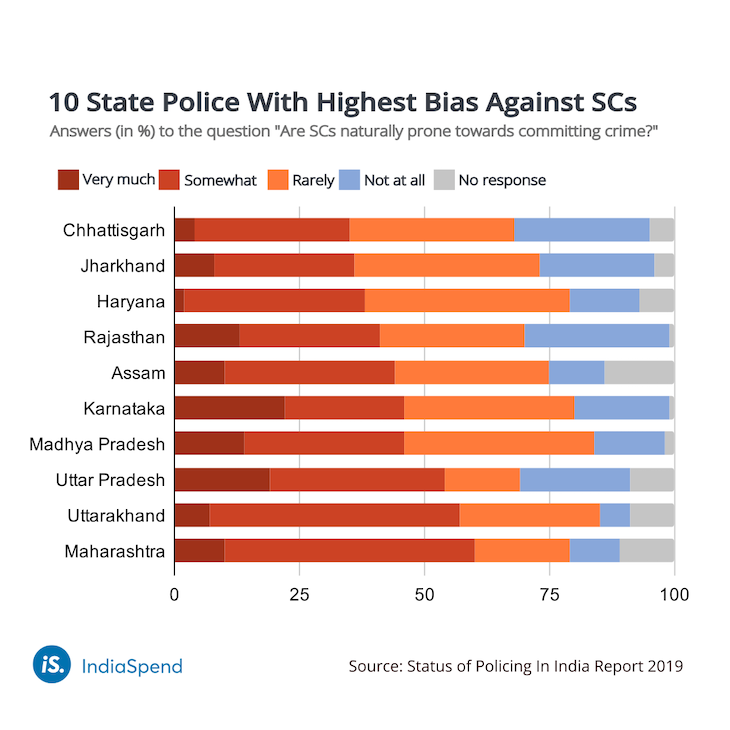 Maharashtra had the highest percentage (53%) of personnel who think STs are “naturally prone” towards crime. Rajasthan (49%) and Uttarakhand (42%) followed. Kerala had the lowest percentage (9%), followed by West Bengal (11%) and Himachal Pradesh (15%).

The question posed was: “To what extent are complaints under the SC/ST (Prevention of Atrocities) Act false and motivated?”

The options were: “Very much”, “Somewhat”, “Somewhat less” and “Not at all”

Diversity in the police force

About 41% police personnel--both men and women--had a “high degree of bias against women in police”, the survey found. This was based on a composite index derived from their response to the three statements mentioned above.

A higher proportion of men in police forces of Bihar (60%), Karnataka (44%), West Bengal (39%), Telangana (38%) and Punjab (33%) reported “high bias” against women in the police. Haryana, infamous for the worst sex ratio in the country, recorded the least bias state against women in the police force with 9% men and 7% women reporting “high bias”, according to the survey.

While 41% think women lack the “physical strength and aggressive behaviour” required for the job, 32% think “women police are incapable of handling high intensity crimes and cases”, and 51% think that, due to “inflexible working hours, it is not alright for women to work in the police force as they cannot attend to homely duties”.

Over 50% of the personnel (both men and women) feel that men and women in the police force are not given completely equal treatment, said the study, adding that women police personnel are more likely to be engaged in in-house tasks including maintaining registers and data, while male personnel are more likely to be involved in field-based tasks including investigation, patrolling, law and order duties.

Less than half the police personnel think SCs and STs within the police are given completely equal treatment compared to other caste groups. SC and ST personnel are more likely to believe that discrimination exists, said the study.

(Tripathi is a principal correspondent at IndiaSpend.)