Bengaluru: At the current rate, nine Indian states will take more than 50 years to increase the share of women in their police forces to 33%, as recommended, a new report estimates. While Madhya Pradesh will take 294 years, Maharashtra will take 14.

The India Justice Report by Tata Trusts released on November 7, 2019, finds women poorly represented, accounting for 7% of the police, 10% of prison staff and about 26.5% of all judges in the high courts and subordinate courts. 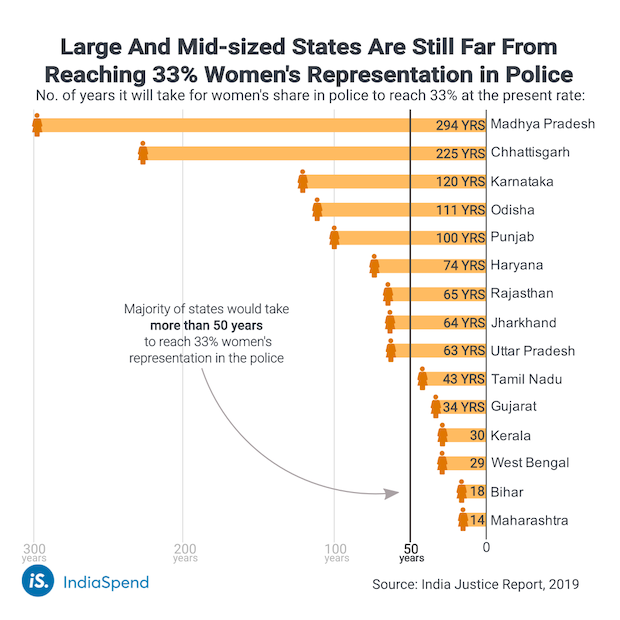 The report is the first of its kind to bring together data from different government sources. Researchers compared 18 large and mid-sized states (with a population of 10 million and above, where more than 90% of India lives) and seven small states (up to 10 million population) based on four pillars of the justice system: police, prisons, judiciary and legal aid.

Among key findings, the report points out that all states have vacancies across four pillars of the justice system, most states fail to utilise allocated funds, and states spend less than Rs 1 per capita per annum on providing legal aid--free legal services meant for the marginalised.

The findings are important because India is ranked 68--below Sri Lanka and Nepal--among 126 countries on the Rule of Law Index, 2019; it ranked 111 on order and security, 97 on civil justice, and 77 on criminal justice.

Millions of cases are stuck in the Indian justice system, causing anguish and protracted costs to litigants. There were over 4.2 million cases pending in the 24 high courts on February 4, 2018, 49% of these more than five years old, as IndiaSpend reported on February 12, 2018.

This is the first in our series based on India Justice Report. In subsequent stories, IndiaSpend will report on each of the four pillars and on the fiscal problems in the Indian justice system. (Read IndiaSpend stories on judicial and police reforms, including conditions of police housing, and police, judicial and prison infrastructure, here).

Vacancies are widespread and numerous across the justice system--in the judiciary, they ranged from 20-40% during the period studied. India had about 18,200 judges, and some 23% of sanctioned posts were vacant. Only about half the 25 states surveyed for the report had made any effort to fill these vacancies over a five-year period.

Gujarat was the only state to reduce vacancies across all posts in the police, prisons and judiciary during the period studied. 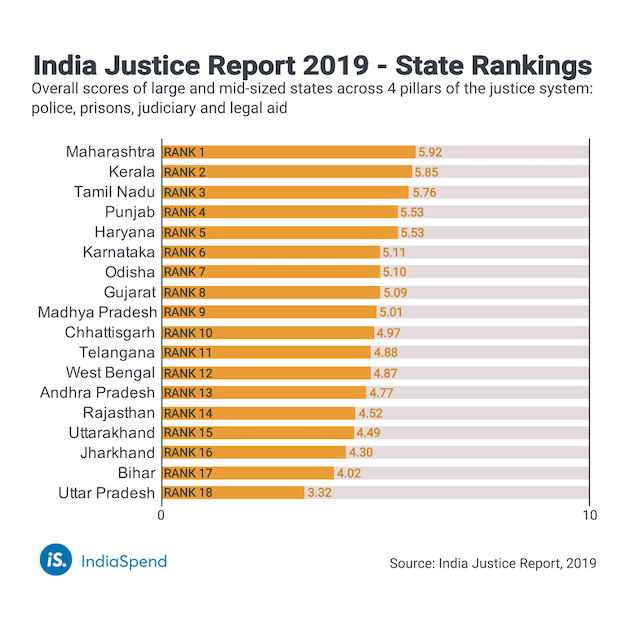 The report points out many intra-state variations--a state could perform well under one pillar but poorly on another. So, although Maharashtra is ranked top overall, it ranks second in prisons (after Kerala), fourth in the police and the judiciary, and fifth in legal aid.

Few states displayed a consistent or uniform performance. Tamil Nadu ranked third overall in the rankings, yet came out top in the judiciary and the police.

States including Gujarat, Haryana, Madhya Pradesh, Uttar Pradesh, Jharkhand, Karnataka, Rajasthan and West Bengal did not fully use the funds and allocations in five years to 2016.

Punjab, however, increased its spending on prisons, judiciary and the police by at least six percentage points more than the increase in its total expenditure--the only state to do so.

“In nearly all the states, the problem of budget inadequacy is juxtaposed with that of underutilisation of available funds,” Maja Daruwala, chief editor of the report and senior advisor, Commonwealth Human Rights Initiative told IndiaSpend. “Funds available under various schemes from the Centre are typically earmarked for only very specific expenditures.”

None of the states and UTs used up their National Legal Services Authority (NALSA) budget. NALSA provides free legal services to the weaker sections of society and to organise Lok Adalats (people’s courts) for amicable settlement of disputes.

Even the states with smaller populations did not do better. "Despite having smaller jurisdictions to govern, populations and areas, the data shows that small states are not able to outperform their large state counterparts," said Daruwala.

The researchers did not study Nagaland, Manipur, Assam, and Jammu and Kashmir (before it was declared a UT) due to “challenges of internal security going beyond the normal ambit of policing and law and order”. The report does not rank the seven UTs that existed during the research period (Anadaman and Nicobar, Daman and Diu, Delhi, Chandigarh, Puducherry, Lakshadweep, and Dadra and Nagar Haveli; the new UTs of Jammu & Kashmir and Ladakh have since been created).

In order to acquire the latest data on prison and police organisation reports, more than 700 requests under the Right to Information Act were filed across 150 departments including state departments of the office of the Director General of Police, high courts, state legal services authorities, state crime record bureaus, and prison departments, among others, the report notes.

Tamil Nadu, Uttarakhand and Punjab were the top three states in police capacity. Rajasthan (17) and Uttar Pradesh (18) were placed at the bottom.

But, as mentioned earlier, even the top ranking (overall) states displayed a marked variation. Take Kerala, which is ranked second overall with the best indicators under prisons and legal aid. For police functioning, however, it ranks 13.

Over five years to 2016, the women in the police force and women officers among all police in Kerala declined 0.03 and 0.13 percentage points respectively. Vacancies at the officer level increased by over 3 percentage points.

On fulfilling their diversity quota, the success of the police in filling officer-level reservations in all caste categories--scheduled caste, scheduled tribe, and other backward classes--was limited. Karnataka is the only state to have succeeded.

Only six states and UTs--Daman and Diu, Meghalaya, Goa, Manipur, Gujarat and Kerala--managed to meet or exceed their scheduled caste quota.

In second and third place were Punjab and Haryana. The bottom two were Bihar and Uttar Pradesh.

Among the large and mid-sized states, Telangana had the largest share of women in the subordinate courts, at 44%. But at the high court level, this dropped to 10%. 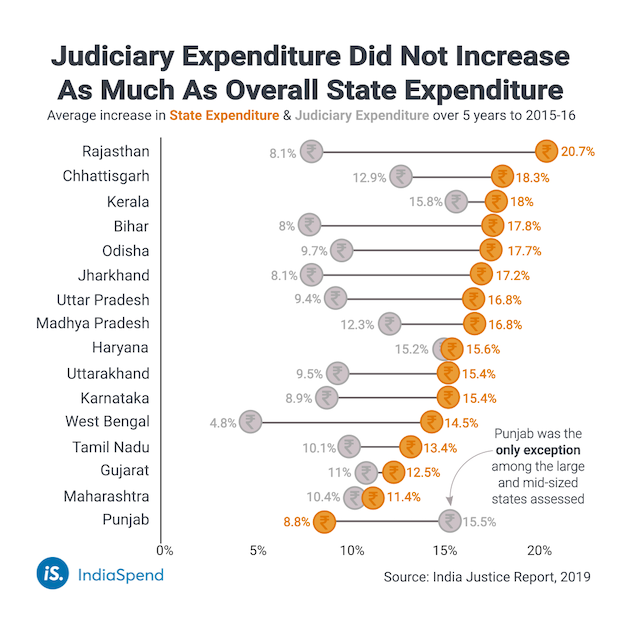 Among the small states, Sikkim topped on the representation of women with 33.3% in the high court. Goa came second.

Sikkim also came out well in that its high court fewer judge vacancies, below 20%.

Kerala and Maharashtra fared the best under prisons. Both states improved on multiple indicators across five years to 2016.

During this period, Kerala, Karnataka, Chhattisgarh, Gujarat, West Bengal, Haryana, Bihar and Maharashtra reduced vacancies at both the officer and cadre staff levels. At the officer level, Maharashtra showed the most improvement among states in filling up officer vacancies with annual average increase of 3.45 percentage points.

The staff vacancies in Tamil Nadu, however, showed an increasing trend, rising by 8 percentage points.

Across all levels of the prison administration, 9.6% of staff are women, far lower than the 33% suggested in policy documents, according to the report.

At the other end of the scale, Goa and Telangana performed poorly with only 2.2% and 2.3%, respectively, of women among their prison staff.

In 16 states and UTs, prison occupancy rate was more than 100%, according to the 2017 prison statistics. with an all India average of 115.1%. The overcrowding is accounted for by the presence of undertrials--people in custody awaiting ‘investigation, inquiry or trial’. For every convict India had two undertrials in its jail, says the report.

Legal aid is intended to help the poorer sections of society to ensure that no one is denied an opportunity to secure justice. The per capita spend on legal aid was just Rs 0.75 per annum (2017-18).

Kerala and Haryana are the top two states while Uttar Pradesh is at the bottom. Among the small states, Goa was number one and Arunachal Pradesh last.

“The biggest challenge in the implementation of legal aid services is the uneven organisational practices in the delivery of legal services across districts and sub-divisions,” says the report.

As of January 2019, 22 states/UTs have fewer than 10 para-legal volunteers who provide legal services to remote locations and to the marginalised, per 100,000 population. Dadra and Nagar Haveli has the least (0.9), followed by Uttar Pradesh (1.6).

At the other end of the spectrum, Himachal Pradesh and Arunachal Pradesh have 84.3 and 77 PLVs per 100,000 population.