Delhi and Jaipur: If India’s COVID-19 mortality ratio is calculated on the basis of cases with known outcomes--whether the patient has recovered or passed away--the mortality ratio of detected cases would be 5.5%. This is 2.7 percentage points higher than the government’s estimate of 2.8%.

Currently, the government calculates the case fatality ratio (CFR) as the percentage of deaths out of all confirmed cases. However, it takes about two weeks to know the outcome of the disease for mild cases and three to six weeks for more serious forms. Nearly 49% of COVID-19 cases in India are active and have not yet culminated in recovery or death, so including them as the denominator in calculating the mortality ratio would lead to an underestimation of the mortality ratio.

“The current measure of fatality ratio that is based on total deaths upon total cases misses the time gap between receiving test results and getting impacted by the severity of the virus,” said Ashwin Srivastava, CEO of Sapio Analytics, a data analytics firm that has been advising state governments on their management of the COVID-19 crisis. “Data is constantly moving right now and time is an important enough parameter to not ignore,” he added. 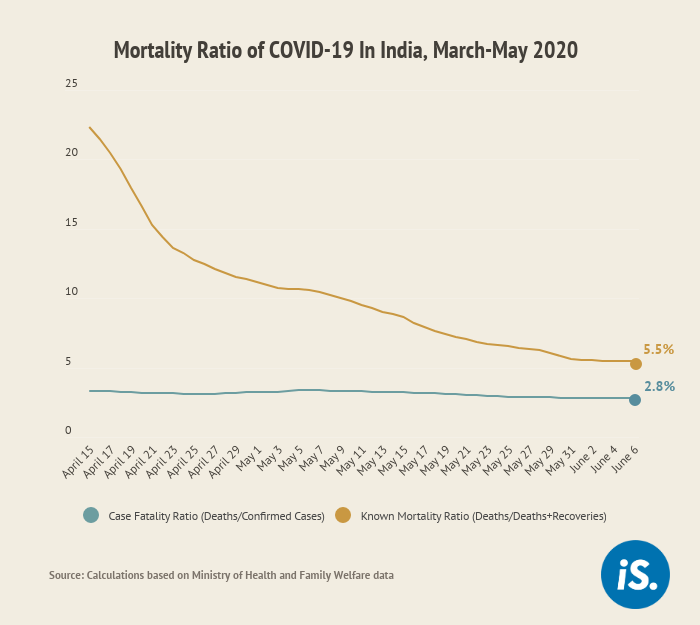 Difficult to calculate the actual mortality ratio during an epidemic

It is hard to calculate the actual mortality ratio during an epidemic as data are continually changing. During the H1N1 pandemic in 2009-10, estimates of the mortality ratio ranged from 100 to 10,000 deaths per 100,000 cases, found a review of studies.

Calculating the mortality ratio using all confirmed cases of COVID-19 underestimates the true ratio, as we said. The percentage of deaths among all cases would give an accurate infection fatality ratio (IFR) only at the end of the epidemic when the infection numbers and outcomes of all cases are known or estimated, including numbers of asymptomatic and mild cases, said Sarika Bhattacharyya, principal scientist at the National Chemical Laboratory, Pune, and a member of Indian Scientists’ Response to CoViD-19, a countrywide coalition of scientists studying the COVID-19 outbreak in India. “However we have not reached the end of the epidemic yet,” she added.

Calculating the percentage of deaths out of cases with known outcomes yields more reliable estimates of mortality during an outbreak. This ratio is higher at the beginning of an outbreak, but as more mild or asymptomatic cases are detected and the number of recoveries increases, this ratio is expected to reduce. For instance, in India, the mortality ratio for culminated cases was 23.3% on April 15, 2020, and reduced to 5.5% by June 7, 2020, our calculations show.

Since the beginning of the outbreak, India’s COVID-19 testing has concentrated on those who are symptomatic. Only those asymptomatics who are direct and high-risk contacts of confirmed COVID-19 cases can be tested for the virus under the current testing criteria of the Indian Council of Medical Research (ICMR). Partly because of this, only six contacts of every COVID-19 patient, on average, are tested in India, as IndiaSpend reported on June 2, 2020.

Currently, India does not have publicly available data from a country-wide sero-prevalence survey that tests blood samples of a large population irrespective of their symptoms, or sentinel surveys, which include random RT-PCR testing in a particular community. The ICMR on May 12, 2020 said it will conduct a sero-survey in 69 districts but its data are not available yet.

The Centers for Disease Control and Prevention (CDC), the US’s main public health institute, has been conducting large-scale geographic sero-prevalence surveys in the most impacted cities in the US. In India, the state of Kerala has begun sentinel surveys for healthcare workers and individuals at high risk of exposure--such as delivery staff, media and police personnel. 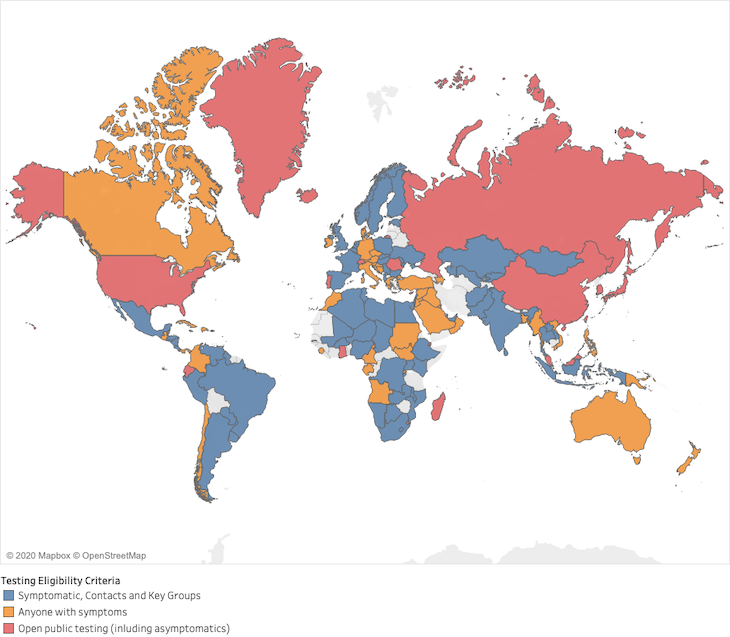 Source: Blavatnik school of Government at Oxford University
Note: The testing criteria in each country is different. For e.g., China and the US test anyone seeking a test, Australia and Germany test any symptomatic patient, whereas India and South Africa only test individuals with contact with a confirmed COVID-19 case.

Due to such limited testing, the figure for confirmed cases is less likely to include asymptomatic and mild cases, leading to an overestimate of the mortality ratio.

Countries with higher and more extensive testing are likely to better count asymptomatic and mild cases and so their mortality ratio will be more accurate. In these contexts, a low mortality ratio would mean that the country has successfully managed the outbreak. The mortality ratio among culminated cases is 2.5% in South Korea, 4.9% in Germany, and 2.6% in Russia. In comparison, in the US, 18.2% of culminated cases have resulted in deaths and 11.8% in Brazil, per our calculations based on data from the Johns Hopkins Coronavirus Resource Center.

At the same time, data on the cause of death in India are patchy, which could lead to an underestimation of COVID-19 deaths. About 75% of total deaths in India occur at home and are not ascribed a certified cause of death. It is likely that COVID-19 deaths taking place outside medical facilities are not being counted, especially as cases surge and exceed available hospital capacity. The ICMR has said that it will study weekly death data to understand whether there is undercounting of COVID-19 deaths, but those data are not yet publicly available.

Administrative lags and intentional underreporting could also affect the quality of data.

In Delhi, by early May 2020, data from funerary records indicated that the number of last rites carried out under the protocol for COVID-19 deaths is greater than the official death count given by the government. On May 31, 2020, the state government issued show-cause notices to four hospitals including the All India Institute of Medical Sciences and Safdarjung Hospital to explain the delays in reporting deaths.

Reports from West Bengal allege that doctors had been instructed to not classify COVID-19 deaths as such on death certificates, pointing to systematic fudging of data. The government order was reported to have been withdrawn later.

The chart below shows the different mortality ratio for states and union territories in India that have reported more than 10 deaths.

Of states reporting over 5,000 cases, West Bengal has the highest known mortality ratio of 10.9% while Tamil Nadu has the lowest of 1.5%.

Source: Calculations based on Ministry of Health and Family Welfare data

India’s known mortality ratio of 5.5% is lower than that in the worst-affected countries in Europe and in the US.

Source: Calculations based on data as of June 6, 2020 from Johns Hopkins Coronavirus Resource Center

Though mortality ratios are low in South Asia, testing is also low and these countries might also have poorer quality data on the cause of death, leading to undercounting. As of June 4, 2020, 73 days since the fifth confirmed death in the country, India had tested three samples per 1,000 people. Pakistan and Bangladesh, which reported their fifth confirmed death around the same time, had conducted 2.8 and 2.2 tests per 1,000 people, respectively. In comparison, South Africa had tested 13.8 people per 1,000, Russia had tested 80.4 per 1,000, and South Korea 19 per 1,000.