Mumbai, Kolkata, Chennai May Be Submerged By 2050: Latest Data

Bengaluru: Parts of Mumbai, Surat, Chennai and Kolkata will be either underwater or ravaged by recurring floods by 2050 as sea levels across the world will continue to rise with increasing carbon emissions.

Across India, an estimated 31 million people live in coastal areas at risk of annual flooding, a number that could go up to 35 million by mid-century and rise further to 51 million by the year 2100. These projections are based on extreme-case scenarios if global carbon emissions continue to rise unabated. At the moment, 250 million people around the globe live in areas at risk of annual coastal floods.

“This research means that the stakes are even higher than we thought,” said Benjamin H. Strauss, CEO and chief scientist at Climate Central, where the study was conducted.

The study was led by scientists Scott A. Kulp and Benjamin H. Strauss of Climate Central, an independent organisation of scientists, journalists and researchers working on climate breakdown. The study builds on the global elevation dataset by the National Aeronautics and Space Administration (NASA), produced in the year 2000, and known to have some errors. Kulp and Strauss have used artificial intelligence to reduce those errors and come up with the latest estimates that show the global coastline is three times more exposed to extreme coastal water levels than previously thought.

Global sea levels have risen by 11-16 cm or half the height of a 500 ml coke bottle in the 20th century, compared to the pre-industrial era, generally taken to be the year 1850. Even if the world drastically cuts down its annual carbon emissions, sea levels would rise half a metre by 2050 or roughly the height of two 500 ml coke bottles stacked up. In the most extreme scenario the sea level would rise 2 m by the turn of the century, or equivalent to the height of nearly nine such bottles stacked on top of each other.

As many as 70% of those living in low-lying areas are in eight Asian countries: China, India, Bangladesh, Vietnam, Indonesia, Thailand, the Philippines and Japan.

Rising global temperatures due to carbon emissions are leading the ice at the poles to melt, driving up global sea levels. China is currently the largest emitter of carbon followed by the US, the European Union and India, as IndiaSpend reported in September 2019. When looking at per capita emissions, Canada tops the list, followed by the US, Russia and Japan. India has one of the lowest per capita carbon emissions in the world, and the latest science suggests the country is set to face a rise in flooding, erratic rainfall and storms as the planet heats at a record pace.

The UN Secretary General Antonio Gueterres has asked for a 45% cut in global carbon emissions by 2030. The remaining emissions must be soaked up by “carbon sinks” such as forests, oceans and soil, and reduced to what is called “net-zero” by 2050 to contain global temperature rise to 1.5 deg C.

Many of the island nations most affected by sea level rise have contributed negligible amounts to global carbon emissions and are already on their way to becoming carbon neutral. But large amounts of carbon already released into the atmosphere means, “even if we went carbon neutral today there will still be substantial dangers to coastal populations”, said Kulp. 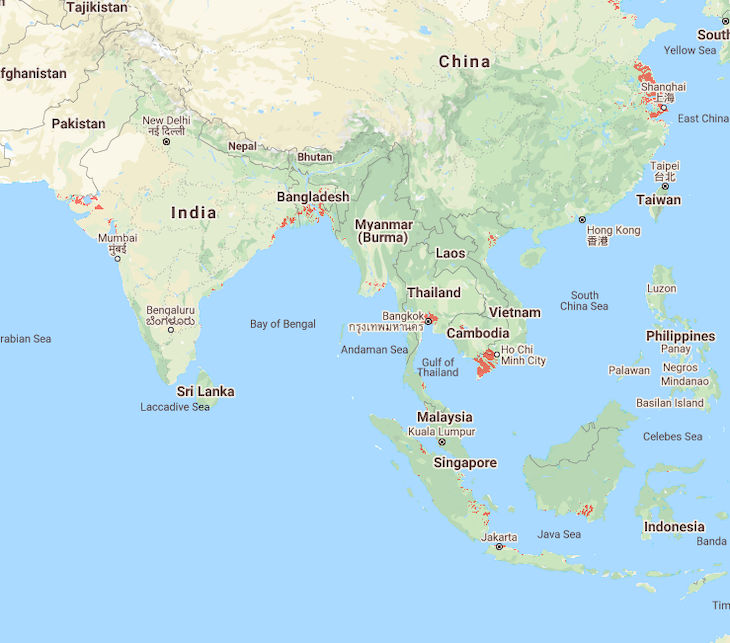 Projections based on latest data show large parts of coastal cities including Mumbai and the coastal areas of Odisha and the north-east will be inundated by mid-century.
Source: Coastal Risk Screening Tool by Climate Central

The global temperature rise has set in motion melting that will continue for some time even if the carbon emissions were drastically reduced today. When an ice cube is put on a table it does not melt immediately, it takes some time. Scientists say something similar is happening to the glaciers in the Arctic and the Antarctic region. “Unfortunately, the glaciers and the ice sheets of the world, they haven’t caught up with the warming that we have already caused,” said Strauss, co-author of the study.

“The amount of emissions we make does not make a lot of difference (to sea level rise) between now and mid-century, but it makes a much greater difference at the end of the century and even beyond that,” said Strauss. By continuing to pollute we increase the chance of the worst-case scenario, he said.

The study did not take into account flooding due to erratic monsoons in India but scientists said that it could push up the numbers of those likely to be affected by flooding.

India has a 7,500-km coastline and the second largest coastal population at risk due to sea level rise after China’s current 81 million. “The impact of the warming oceans will increase climatic events such as cyclones,” said Anjal Prakash, associate professor, Regional Water Studies, TERI School of Advanced Studies. “These events are predicted to be on the rise and will be more severe in future decades.” Prakash, who was the coordinating lead author of a recent report by the Intergovernmental Panel on Climate Change (IPCC, the UN body to assess the science on climate change), added that “shifting rainfall patterns of Indian monsoon will also have a bearing for people living in coastal areas”.

Together, these factors are likely to push up migration.

As salt water from the seas enters inland, it renders fields unfit for cultivation, as IndiaSpend reported from Odisha and West Bengal on the rise in undocumented internal migration in the country. With large parts of Bangladesh set to become more saline or be inundated, international migration is also set to rise, evidence suggests.

But across the world, many are choosing to stay back, and governments are directing resources to building coastal walls to allow communities to remain where they are even as sea levels rise.

Globally, around 110 million people are already living in areas below high-tide levels; in India this number stands at 17 million. “That would suggest that there are sea walls in various places that would allow habitation of certain neighbourhoods that would otherwise be below the high tide line,” said Strauss from Climate Central. “But what happens in neighbourhoods when it rains is that the water has a hard time getting out.”

“One of the key considerations in mitigation strategies and how aggressively to mitigate is how much risk are you willing to tolerate of this really drastic scenario of rapid sea level rise,” said Strauss.

(Shetty is a reporting fellow with IndiaSpend.)