Mumbai: The states of Kerala, Goa, Rajasthan and Andhra Pradesh have been most successful in integrating migrant workers, while crucial migrant receiving states, including Delhi, have done poorly, shows the Interstate Migrant Policy Index (IMPEX) that seeks to measure integration of interstate migrants.

India's average IMPEX 2019 score for 28 states and the Union Territory of NCT Delhi is 37 out of 100, reflecting the limited attention paid to integration efforts in destination states.

The index could help bureaucrats and stakeholders in evolving policy for India's 455 million internal migrants who remain one of the most excluded groups in the country. This figure is from Census 2011, and may have changed between 2011-20.

The COVID-19 pandemic, while making these migrant workers visible, exacerbated the challenges they had to surmount. This is particularly true of migrants who cross state borders for work, as more than 54 million did as per Census 2011. Conversations around migrant integration--a multi-faceted process that involves migrants settling permanently or temporarily in destination states and interacting in many ways with receiving societies--rarely receive policymakers' attention, say experts.

Central policies exist to foster integration of migrant workers, especially through statutes such as the Interstate Migrant Workmen (Regulation and Conditions of Service) Act 1979, the Minimum Wages Act 1948, the Contract Labour (Regulation and Abolition) Act 1970, the Equal Remuneration Act 1976, and the Building and Other Construction Workers (Regulation of Employment and Conditions of Service) Act 1996. However, state governments are responsible for a much wider range of policy areas touching upon migrant workers' everyday lives, for which central government policies do not suffice.

"Migration within the country is a fundamental right of every Indian citizen. However, this is seldom realised given the sedentary biases of the policies of the states," Benoy Peter, executive director of the Centre for Migration and Inclusive Development (CMID) in Ernakulam, Kerala, told IndiaSpend. CMID works with migrant communities in south India and has conducted assessments of interstate migrants in Kerala during the lockdown. "The Centre also hardly intervenes. The legislations that envisage the welfare of migrant workers mostly exist on paper and are never realised." 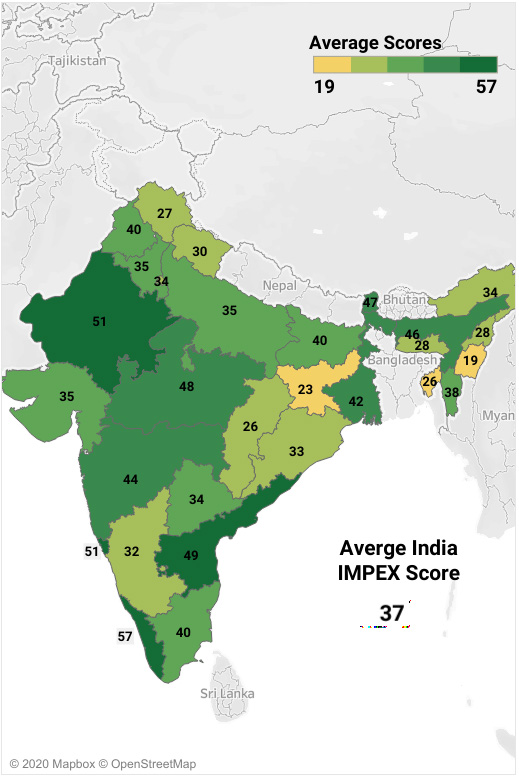 Scores, on a total value of 100, are assigned to states based on existing schemes/rights (for instance, an accident insurance scheme for migrant workers), facilitation of access/rights (for instance, a dissemination plan to ensure the scheme is communicated to beneficiaries in their preferred language) and measures to achieve future change (for instance, data collection and research efforts to enact future change) for each policy area. An average of these policy areas is computed for all dimensions to produce the final score.

Kerala (57), Goa (51) and Rajasthan (51) are the only three states to score over 50 in the index. Kerala additionally leads the states on three of the eight indicators--child rights, education, and health and sanitation. 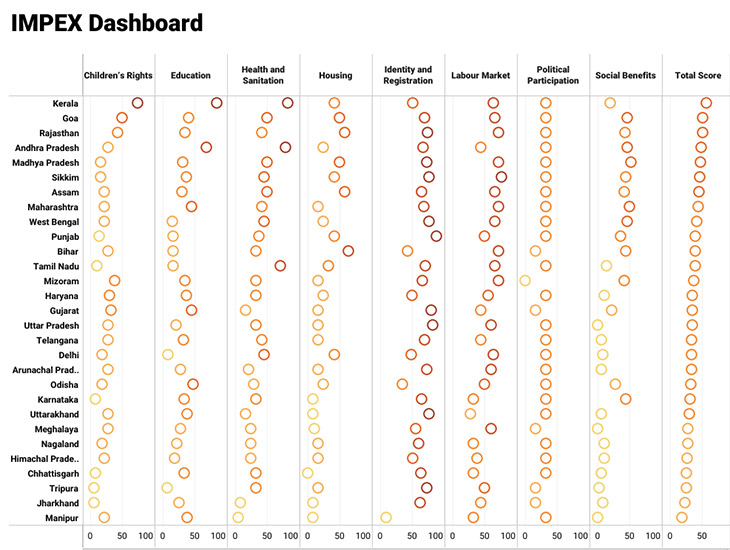 Kerala's performance can be attributed to two aspects. The first is the state's recognition of migrants as a considerable force guiding the demographics. This is reflected in the state's child education policy, Project Roshni, which recognises the special needs of migrant children in terms of care, education, and protection, as IndiaSpend reported after the pandemic struck. The second is the existence of targeted schemes for migrant workers and extending to them social security, labour protection and welfare--for instance, the Aawaz health and accident insurance programme for migrant workers. Not only does Kerala include migrants within general policymaking (principle of equality), it also accounts for the special needs that migrant communities may have (principle of migrant vulnerability)--both of which form the underlying principles of the IMPEX evaluation.

Rajasthan scores well because it does not have restrictions based on domicile certificate--granted to those born or resident for 10 years in the state or women married to Rajasthani men--for state employment. India's largest state also has favourable educational policies for all children, irrespective of their migrant status. The Rajasthan Right to Education Rules 2011, which add state-level provisions to a central law, state that all children within Rajasthan (whether resident or migrant) have access to primary education. Additionally, local authorities have to maintain a record of every student irrespective of his/her residency status. It also requires the local authorities to record details of children requiring special/residential facilities on account of migration.

Goa has favourable policies for migrant workers, as mentioned under the Interstate Migrant Workmen Rules, which specify that all information to migrants must be disseminated in their native language and that contractors for migrant workers must bear their healthcare costs.

Andhra Pradesh, with a relatively good IMPEX score of 49, demonstrates how bilateral agreements between states can promote integration. In July 2012, the governments of Andhra Pradesh and Odisha signed an agreement to create a sustainable mechanism to integrate migrants from Odisha in Andhra Pradesh. This effort included child migrants, for whom education would be provided in their native language by roping in Odia teachers to teach using Odia language textbooks.

The states of Bihar (64) and Assam (58) scored the most on the housing indicator. In Bihar, migrants are covered under the state's Shelter for Urban Homeless scheme. The Indian government's Working Group on Migration, in their 2017 report, had pointed out how short-term migrants are pushed to informal settlements, and face threat of displacement and eviction. Bihar's scheme addresses these specific challenges faced by vulnerable groups, including migrant workers, by providing permanent settlement equipped with essential services.

In Assam, the 2015 Urban Affordable Housing Policy covered migrant workers, too, but it is scores lower than Bihar because it requires domicile documents to provide long-term housing to interstate migrants--domicile or residency certificate in Assam requires 20 years of residence and 50 years of prior residence by the applicant's parents/forefathers.

The seven states of Punjab, Haryana, Delhi, Gujarat, Maharashtra, Tamil Nadu and Kerala attract 51% of India's inter-state migrants, according to an IMN analysis of Census 2011 data. Only two of these states, Kerala and Maharashtra, feature in the top 10 on IMPEX.

Despite being the national capital, and a prominent destination for six million interstate migrants according to Census 2011, Delhi scores 34 on IMPEX because access for migrants is tightly tied to domicile requirements. This is true for other popular migrant-attracting states such as Gujarat and Tamil Nadu, too. In the larger National Capital Region (consisting of Delhi-National Capital Territory and parts of Haryana and Uttar Pradesh), which received over 10 million migrants as per Census 2011, Haryana ranks 15th, Uttar Pradesh 16th and Delhi 18th on the index.

A preference for the native population in social security schemes leads to migrants having difficulty in accessing state insurance/healthcare schemes in different states. Enrolment for state social security schemes is often conditional on beneficiaries meeting domicile requirements. For instance, Telanagana's state insurance scheme, Aarogyasri, requires that the beneficiaries have a state ration card.

All states score above 50 on registration and identity because once migrants fulfill the domicile requirements, they have access to all entitlements within the destination state, except for Bihar (43), Delhi (49), Odisha (35), and Manipur (9). For Manipur, only permanent residents of the state can obtain a domicile certificate. In Odisha, the validity of residence certificate is only for five years, and needs to be periodically renewed. In Delhi, while the minimum criteria for residing continuously in Delhi is three years, valid documents like residence and identity proof for the state of Delhi need to be produced. Therefore, an educational certificate for three consecutive years is not sufficient to qualify for domicile requirements. In Bihar, however, the validity of a domicile certificate only extends to six months.

Additionally, while all migrants have equal access to private sector jobs in all states, public sector jobs are reserved for natives. This is not the case in Madhya Pradesh and Sikkim, which score relatively higher on the labour market parameter at 72 and 78, respectively. In Mizoram, which scores 72 on the labour market indicator, small and medium enterprise owners can access loans irrespective of domicile status.

The outcome of exclusion

States tend to frame discriminatory policies that favour locals over interstate migrants, finds the IMPEX analysis. Domicile status constitutes one of the starkest of these. Typically, states require migrants to furnish proof of residence which can be in the form of a domicile certificate or a school transfer certificate from the destination state, which migrants find difficult to produce because they are not residents of the destination states and had acquired education in their source states. It limits access to state-specific social security benefits for migrant workers in destination states. Given that those most in need of such schemes are lower income workers in the informal sector, such policies tend to marginalise migrant workers and other vulnerable groups.

Unable to access housing, migrant workers are pushed to informal settlements on urban fringes, a 2019 IMN analysis reported in IndiaSpend showed. Migrant workers belonging to scheduled castes and scheduled tribes are even more excluded from cities because migrant status is tied to socio-economic status, as reflected in this 2017 report by the Working Group on Migration, which recommended that hostel facilities need to be provided to accommodate migrants from marginalised communities.

Social security schemes are usually not portable across state boundaries, so migrants lose access when they leave their home states/areas, and are unable to avail the benefits at their destinations.

For instance, a 2013 study by economists Jean Dreze and Reetika Khera found that the public distribution system (PDS) rendered migrants--both interstate and intrastate--food insecure at the destination. The rolling out of the One Nation One Ration Card scheme earlier this year aims to ensure portability of rations through PDS. IndiaSpend had earlier reported on how the scheme itself may run into logistical and technical challenges. The gaps in the scheme's functioning were manifest during the COVID-19 lockdown, as migrants were unable to avail rations through government channels, according to a rapid assessment of 11,000 migrant workers by the Stranded Workers Action Network.

Interstate migrants have for long been left out of the ambit of policymaking, especially owing to "exclusionary urbanisation". The impact of such systemic exclusion had a significant impact during the COVID-19 lockdowns. Once the crisis hit, no proper provisions were in place for migrant workers. Where available, proper implementation, facilitation of access, and adequate data to do so was missing, according to at least one assessment of the legal and labour system. Not only did one in every four migrant workers walk home, but 40% of the workers also faced food scarcity, according to Gaon Connection's national-level survey of 25,371 rural residents (including migrant workers) across 20 states and three union territories. Relief measures had to address issues of migrants crossing state borders, raising questions of state accountability. For instance, which state government is responsible for a migrant from Andhra Pradesh working in Maharashtra?

"We must accentuate our efforts to universally mainstream interstate migrant workers," said CMID's Peter. "People should have seamless access to entitlements. State borders should not hamper access."

As migrants return to the cities following the latest guidelines to reopen after the COVID-19 lockdown, it has to be ensured that they do not return to the same patterns of exclusion as before the pandemic.

Rohini Mitra is a researcher at Mumbai-based migration data, research, and policy organisation, India Migration Now. IMN is a venture of the South East Migration Foundation. Follow their work: Twitter/@nowmigration and Instagram/@indiamigrationnow