Bengaluru: When millions of jobless migrant workers across India started returning to their hometowns in May 2020, Pratima and Rajesh Singh decided against heading back to their village in Ballia district in easternmost Uttar Pradesh. Rajesh, who had worked as a welder in Kerala’s central Ernakulam district for 17 years, was among the 120 million Indians left unemployed by the COVID-19-induced lockdown.

The Singh family had a reason for remaining in Ernakulam through the crisis: They did not wish to interrupt their children’s education. Their sons, Amrith (7) and Anshuman (9), are enrolled in a school supported by the district’s Roshni programme that helps children of migrant families become proficient in Malayalam. The three-year-old scheme has been successful in ensuring that these children stayed on in the state’s education system, as IndiaSpend reported in August 2019.

When classes moved to video/online platforms at the start of the school session in June, Roshni too was revived. Volunteers began participating in these remote classes, explaining the lessons in the children’s mother tongues and also involving the parents in the process, said teachers.

Of the 922 students’ families in Ernakulam covered by Roshni, 90% (830 families) had stayed back, as of May 10--46 days after the lockdown was announced--according to the data generated by the programme and accessed by IndiaSpend.

“We stayed on because of our children’s education--changing school will be an issue and it will also mentally impact them,” said Pratima, echoing a view held by the other migrant worker families we interviewed.

Although the exact number of migrants in Kerala is unknown, as much as 11% of the population now (between 3.5 and 4 million) could be migrant, according to a 2017 study by Centre for Migration and Inclusive Development, an Ernakulam-based non-profit.

Hit by the lockdown, India’s unemployment rate for April 2020 was pegged at 23.5%, nearly thrice the level in March. In June, the Kerala government submitted to the Supreme Court that 153,000 workers have left for their homes on 100 special trains for returning migrants and 120,000 workers were still waiting to return.

Like the Singhs, most migrant families in Ernakulam that decided to stay back for their children’s education had little or no work/ income during the lockdown: They either lived on their savings or were supported by relatives back home.

“Some families went home for the vacations [declared in March before the lockdown] and have not been able to come back, and atleast 50% want to come back,” said Jayashree K, academic coordinator of Roshni. “I think the support [language proficiency] we are offering is useful.”

School closures in India have impacted 247 million children--more than the population of Brazil--enrolled in elementary and secondary education, and 28 million children who were attending pre-school education in anganwadis (childcare centres), noted a June 23 UNICEF press release on its report on the impact of COVID-19 on children in South Asia. This is in addition to the “more than six million girls and boys who were already out of school prior to the COVID-19 crisis”, it said.

Kerala trialled online classes--First Bell--for two weeks from June 1 for all classes except class 11, and made these available on KITE Victers channel run by the general education department and online. Classes are scheduled for two hours for class 12, 90 minutes for class 10, and 30 minutes for lower and upper primary students.

The digital classroom sessions include Roshni volunteers, as we mentioned earlier. The videos are edited down to small capsules and shared with students and parents and are followed with instructions for educational activities. The children complete their activities, take a photo and video of their work and share it in the group with the help of parents. Some children are able to watch the videos as and when they are broadcast on TV or online but many students have trouble accessing a device. 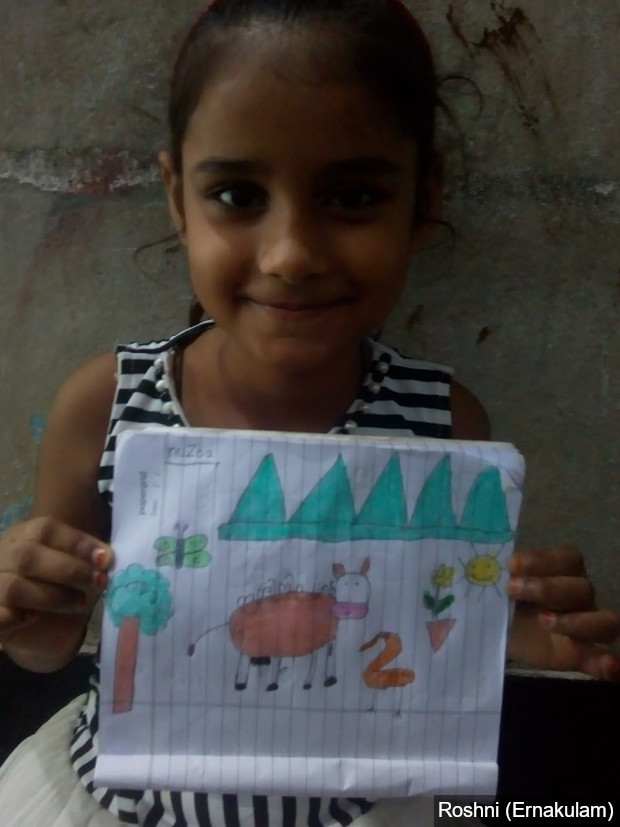 Children share videos or photos of their educational activities with teachers and Roshni volunteers.

“If there are more than two children [to a device], it becomes difficult to watch the videos and complete activities,” said Jayashree. The volunteers review the activities and share feedback.“If we have doubts, the volunteer helps me out in Hindi and sometimes sits up late [to help],” said Pratima.

The number of migrant students in Ernakulam’s government and government-aided schools increased 44% to 3,985 over a year to 2019-20, IndiaSpend reported in August 2019

“Online classes (digital class) are in no way a substitute for classroom teaching but with online classes, we want [students] to make use of the time without pressuring them,” Jeevan Babu, director, general education department, told IndiaSpend.

The Singhs currently have one smartphone that the children use for their lessons. Rajesh is out of a job and takes on occasional assignments. The family is managing with his sparse earnings, savings and the support of relatives in Uttar Pradesh. “We do not even have a TV so a laptop [for the children] is out of the question,” said Pratima.

The state government had conducted a survey in May before the start of online classes and found that there were 280,000 students who would not be able to access online classes. “Our aim was to ensure that the child watches the class, probably the same day or within the week, depending on the availability of electricity and internet connectivity,” said Babu. “In places without such facilities, we have ensured that classes were downloaded and viewed on laptops or TV.”

Most migrant families have access to at least a phone, said Roshni’s Jayashree. For those who do not have any device, schools telecast classes at facility centres such as libraries, anganwadis and Kudumbashree [state women’s collective] centres.

In June, a 14-year-old Dalit girl in northern Kerala’s Malappuram district died by suicide reportedly over not having access to internet or a TV.

Ankit Kumar, a class 7 student, studies in a Roshni-supported school and is taking online classes now. He misses school and friends and finds classroom teaching better. “I can understand Malayalam, but reading is difficult,” he said.

Ankit’s parents are from Siwan in Bihar and run a home-based footwear business in Ernakulam, which supported nearly 20 other migrant workers till the lockdown. “We shifted here with children nearly four years ago because back home the education system was not good and my husband was worried about their future,” said Anita Kumar, Ankit’s mother. Clients have not been placing orders and business has been dull. “We do not have any income but do not want to go back home as it will disrupt his classes,” she said.

Muthu [she uses only one name], a single parent who works in a mall in Ernakulam, came back from her village in Tirunelveli, Tamil Nadu in early June soon after classes began. “I did not want my daughter to miss classes, and also had to get back to work as the mall had reopened,” she said. Although they have a TV, the government's 30-minute classes are viewed on a mobile.

Roshni volunteers collect daily data on how many students have been able to watch video, and participate in activities. Even among families that returned to their hometowns, 55 students have been watching classes, noted Roshni data as on July 1.

Classes at anganwadis and work sites

Hasina Khatun, a Roshni volunteer and a migrant from West Bengal’s Murshidabad district, helps children ease into Malayalam using Bengali and Assamese. She downloads online classes on a pen drive and plays it on TV for around 25 children at two anganwadis. “There are children till upper primary,” she said. “Although online classes are only for 30 minutes, children are split into multiple batches and often these classes extend into the evening. Due to COVID, we can’t go to their homes to help.” Although most children understand Malayalam, they face problems writing or reading it.

During the lockdown, with schools closed, Hasina and other Roshni volunteers worked at the district administration call-centre set up to support migrant workers who needed essentials and travel needs. Hasina’s husband, a driver, had met with an accident before the lockdown and she relied on her savings and daily wages of Rs 500 from the call centre to see her family through. “I have stopped work at the call-centre because the classes started,” she said.

Another volunteer, Supriya Debnath from Odisha, supports students at an on-site facility provided by a concrete block-making factory where many of the parents, mostly from Odisha, work. “Class starts by 11 a.m., and we have created batches based on the number of children, maintaining social distancing,” she said.

These classes have added more work for volunteers who now have to also engage with every child online for almost all subjects. They have to keep abreast with the latest classes and ensure that they understand it before they are able to explain it to the children. “Doing all this online is difficult although the school support is available,” said Jayashree.

Roshni’s success found mention in the governor’s address in the state assembly in January, noting that it would be expanded across the state. However, the model can be replicated only if there are a large number of students justifying the investment in resources, said Babu, director of general education. And unlike Ernakulam, in most districts, migrant workers live without their families, he added.

The immediate requirement will be to “to find out the numbers who have come back” after the lockdown was eased. “Some of them may not come back with their families,” said Babu.