Severe siltation and pollution in Kashmir's largest freshwater lake is eroding local livelihoods, and the natural habitat of native plants and fish species

Wular Lake, with the snow-capped Himalayan mountains in the backdrop, in Bandipora district, Jammu & Kashmir, May 15, 2022. Photo credit: Umer Ahmed for IndiaSpend

Bandipora (Jammu & Kashmir): Hailed as one of Asia's largest freshwater lakes, Wular is shrinking with an urgency hard to reverse. A flood basin for the Kashmir Valley, parts of the lake have turned into shallow streams, with vast expanses of the area covered in silt and dotted with solid waste.

At least 27 sq km of the 130 sq km classified as the lake area by the state Revenue Department has been converted into willow plantation sites--identified as a major cause of siltation--at the cost of the natural habitat of migratory birds, fish and plant species.

With the declining water levels and deteriorating water quality, the lake and its surrounding areas have reported a sharp decline in bird and fish population in recent years. The bird population around the lake declined from 120,000 in 2020 to 707 in 2021, as per the Asian Water Bird Census report. Meanwhile, studies show that several native fish species of the lake have disappeared over the years or are endangered.

As much as 60% of Jammu & Kashmir's fish produce is sourced from Wular lake and, at least 32,000 families from across 37 villages around the lake, including 2,300 fisher households, depend on the lake for their livelihood, state government body Wular Conservation and Management Authority (WCMA) told IndiaSpend. However, for the past few years, most of them have been struggling to make ends meet.

Stopping the inflow of solid waste and dredging are the only solutions to reclaim the lake, particularly the 27 sq km of the willow plantation site that is critically silted, according to WCMA. The state body plans to cut 500,000 trees over 7.4 sq km of the lake to increase its water level.

Shakeel Ahmad, 28, wakes up at 3.30 a.m. on most days to head to the lake, with his harpoon and a fishing net. He walks through narrow passages between scattered log huts to the open waters of Wular, in Qunis village in Bandipora district.

With the dawn yet to break, he uses his flashlight to locate his boat. "The water seems to recede every morning," Ahmad said. "Wullar has lost its depth. It is too shallow and sometimes it becomes hard to even row the boat in the lake."

It is 7 a.m. when Ahmad returns with his catch. "The fish are hard to come by. The harvest is too little compared to some years ago," he said. 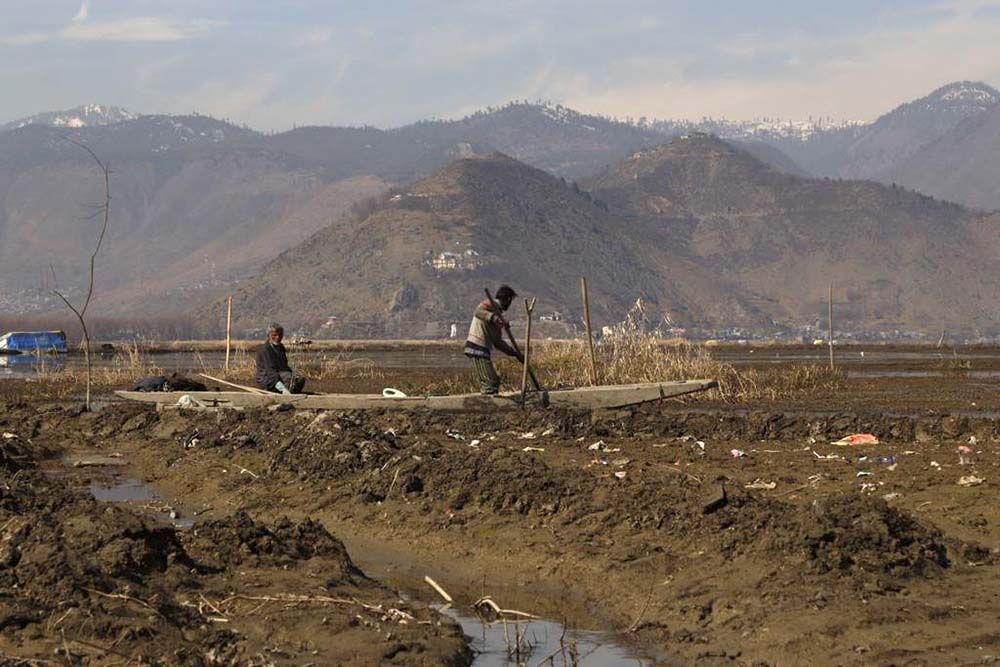 A critically silted, barren part of Wular lake, with waste strewn on the ground, in Bandipora district, Jammu & Kashmir, May 15, 2022.
Photo credit: Umer Ahmed for IndiaSpend

Till about 10 years ago, Ahmad recalled, an average day would see his boat stacked with bucketfuls of fish. From a daily catch of 15-20 kg, it has now shrunk to 2-3 kg, on average. "This has plunged us into poverty and despair. We work hard, and in return for a day's labour we get Rs 400 at most for 2-3 kg on a good day. It is hard to survive."

"We may cut our costs for now, but this can't go on for long…Five years from now, I don't see how we will survive. Our lives depend on this lake."

WCMA officials estimate the total fish production from the lake to be around four-six tonnes annually. "There is no systematic marketing facility available for the produce extracted from Wular lake, which makes it difficult to estimate the revenue generated from the lake," said Mudasir Ahmad, project coordinator at WCMA.

Another resident of Bandipora district, 56-year-old Abdul Rashid Dar of Baniyar village, who has been extracting water chestnuts--the triangular fruit of an aquatic weed--from the lake for the past 40 years, fears that his livelihood is becoming unsustainable.

WCMA officials said that at least 90% of the water chestnuts produced in Kashmir are sourced from Wular lake. However, owing to siltation and low water levels, chestnut extraction has become an uphill task. During peak winter, the locals have to create pools within the lake and pump in water through inlets to extract the nuts.

"The water level of the lake reduces during winters, which impacts our livelihood," said Dar, who earns around Rs 400 per day selling 10-15 kg of the nuts. "We are permitted [by the revenue department, which provides licences for extraction] to extract water chestnuts only between November and February, and for the last few years the lake has been very shallow."

"We fear that if the water level continues to decrease during the lean months, the time is not far when Wular will be bereft of the chestnuts forever." 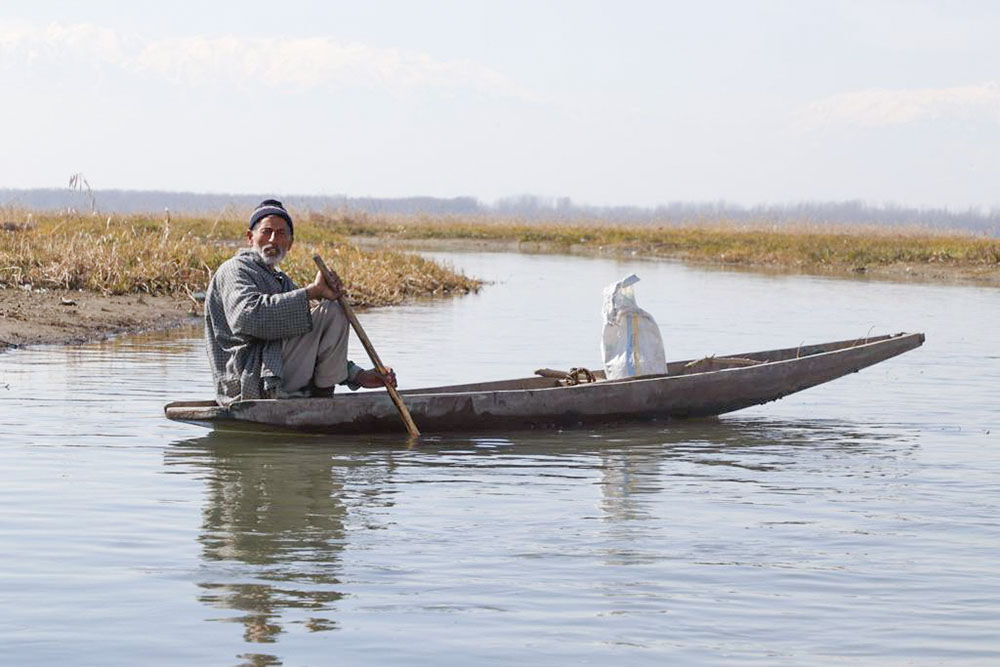 Fifty-six-year-old Abdul Rashid Dar of Baniyar village, who has been extracting water chestnuts from the lake for a living, for the past 40 years, in Bandipora district, Jammu & Kashmir, May 15, 2022.
Photo credit: Umer Ahmed for IndiaSpend

Besides the reduced harvest of fish and water chestnut, the locals also lament the loss of Nadroo, lotus stem.

"We used to extract tons of lotus stem from the lake," said Abdul Khaliq, 55, sarpanch of Bangladesh village in Bandipora district. "But unfortunately, over the last ten years, Nadroo, one of the cherished ingredients for many Kashmiri delicacies, has almost vanished from the lake." He blames polythene pollution, siltation, and encroachment for the decline of Nadroo in Wular lake.

"Wular is one of the most disturbed ecosystems of the Kashmir Valley," says hydrologist and environmental activist M.R.D. Kundangar. "The major ailment of the wetland is siltation, which has already claimed most of it. The remaining 10% will also disappear unless corrective measures are taken."

"Polythene influx has degraded the lake's water quality, posing a risk to residents who consume the water, and also to the fish, plant species and migratory and resident birds native to the lake."

The Jhelum river, a significant water source that feeds the lake, pours into it solid waste, including polythene. As per a 2000 report titled Ecology and Conservation of River Jhelum, Srinagar produces 525-575 m3 of solid waste every day, of which only 30% is managed by the Srinagar Municipal Committee. Most of the remaining waste makes its way to the Jhelum, directly or indirectly.

Similarly, Anantnag produces 57 m3 of solid waste daily, of which 18 m3 is collected by the municipal body and dumped either near Eidgah or into the Jhelum river. The waste generated along upstream Jhelum directly reaches Wular. Meanwhile, in Sopore town, 35-40 m3 of waste is generated daily, of which 5-10 m3 is handled by the Municipal Committee, and the remaining is dumped into the river.

Ahmad of WCMA said that WCMA has been able to remove most of the dumping sites created around the lake; however, they have not yet taken any tangible steps to stop the inflow of solid waste through Jhelum river.

He said that the Municipal Committees of Sopore and Bandipora had made two major dumping sites around Wular lake, which were closed after a legal battle. "In 2020, WCMA filed an affidavit at the J&K High Court regarding the Tarzu dumping site situated near the lake. Taking notice of the issue, Chief Justice of the High Court, Gita Mital, had visited the site and ordered closure of the dumping sites at Tarzu in Sopore and Zalwan in Bandipora."

Pollution has led to cultural eutrophication, increasing the nitrogen and phosphorus content in Wular, said Adnan Abubakr, luminologist, professor and head of Aquatic Environmental Management at Sher-e-Kashmir University of Agricultural Sciences and Technology (SKUAST). Cultural eutrophication is the rapid ageing of a water body because of the introduction of sewage, detergents, fertilisers and other substances into the water ecosystem.

"This has caused the local fish variety Schizothorax (snow trout) to decrease significantly, while grass carp, an alien species, has increased…," he said. "There are still few patches where the water quality is comparatively better."

"The waste from willow trees also settles into the lake, aggravating the siltation in Wular," said Abubakr. 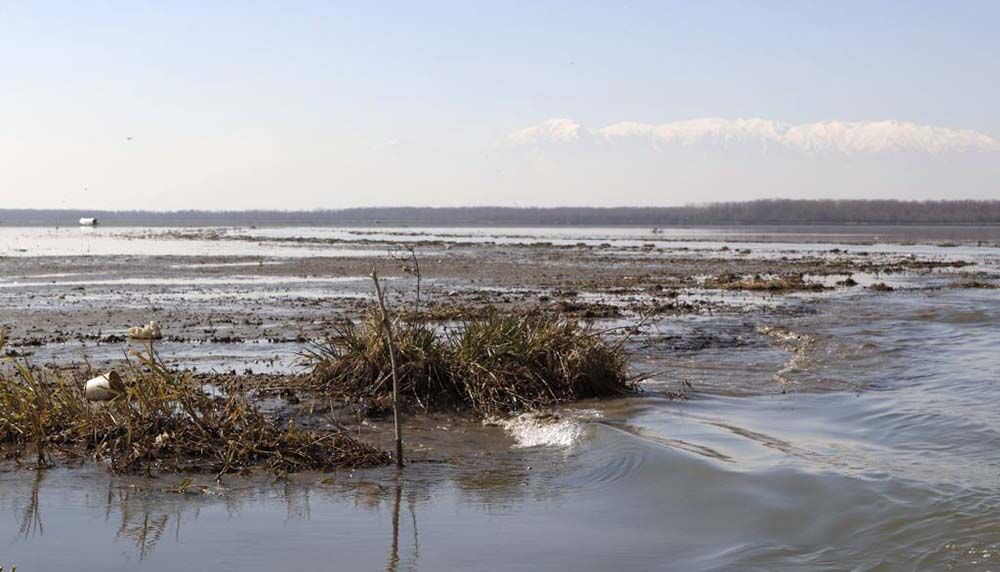 Waste from the willow trees in the lake bed, in Bandipora district, Jammu & Kashmir, May 15, 2022.
Photo credit: Umer Ahmed

The plantation of willow trees began in the lake area in 1961, under social forestry, to provide timber for the manufacture of cricket bats and boxes. It continued till 2002. Over the years, the plantation grew to populate about 27 sq km of the lake, with more than 2.1 million trees. In its report, Wetland International suggested that it is important to remove all the trees from the lake to restore Wular. However, the government conducted a revised study which suggested removing merely 560,000 trees over 7.4 sq km of area.

Another study, titled Economic Feasibility of Willow Removal from Wular Lake, said that removing willow trees could result in a permanent loss of carbon sequestration--the process of capturing and storing atmospheric carbon dioxide--making the region more vulnerable to climate change. It further said that willow roots work as soil binders, and uprooting them could lead to soil erosion. However, it still suggested clearing of willow plantations as an essential step for the restoration of the lake that is crucial as a source of livelihood and as a flood basin.

The method of the restoration of Wular lake has also been widely deliberated, with experts holding divergent views. The dredging method used earlier to clear silt from the lake had been ineffective, said Ahmad of WCMA, adding that the WCMA spent about Rs 148 crore so far in efforts to restore the lake.

"Before 2019, dredging was carried out by using JCBs excavators, which was ineffective in removing silt from the lake. In 2019, we began employing cutter suction dredgers for de-siltation and within a year, 64 lakh cubic metres [6.4 million m3] of silt was extracted from 3.10 sq km of area in Wular."

However, Abubakr of SKUAST, who was a part of the Wetland International study on Wular lake, said, "The current restoration project started by the WCMA is only employing the engineering method. The scientific methods for overall restoration of the lake have not been undertaken. The study conducted by Wetland International suggested implementing both scientific and engineering methods to improve the lake's conditions."

There is no comprehensive study on the annual siltation rate in Wullar, although WCMA has roped in the National Institute of Hydrology (NIH) for an isotopic and water budgeting study for better understanding the lake's siltation pattern.

The WCMA generates revenue through the auction-based axing of willow trees in Wular. The local body's official Ahmad said, "Through auction we allot the tenders to cut down the willow trees, and so far, we have removed 100,000 of these trees. The department generated Rs 20 crore revenue by selling the axed trees."

While the WCMA claims significant achievements and a better future for Wular lake, most locals do not share the optimism. Shakeel Ahmad, the fisherman of Qunis village, said that unless swift action is taken, Kashmir will lose its Wular Lake and people like him will lose their livelihood.

Umer Ahmed is a freelance journalist based in Pulwama, Kashmir. His work has been published in national and international publications.