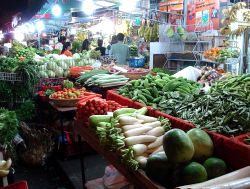 It might be difficult to believe that consumer price inflation (CPI) was below 10% in December, 2013 as claimed by the Government when it released the data on January 13, 2014.

Not that a per cent here or there matters much to the monthly budget because it only seems to rise. Nevertheless, it's worth looking at what the official line on inflation is, thanks to the complexities of inputs that go into the calculation of the figure.

Understanding it may not solve the problem either but it might help you focus your concerns. For instance, knowing that food is a big culprit in the overall basket helps.

The Ministry of Statistics & Programme Implementation (MOSPI) collects data on consumption items under 5 broad categories for the calculation of inflation: 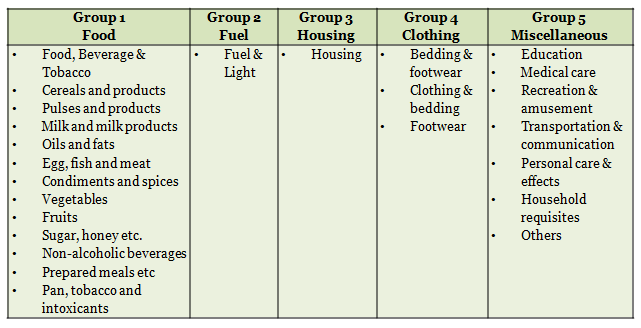 * all items that account for more than 1% or more of total expenditure at the sub-group level;

* all items accounting for more than the specified % of total expenditure of all consumption items; for e.g. food, housing, miscellaneous greater than 0.4%; and

* all items for which more than 75% households report consumption.

Then, these items are given weightages in the calculation for consumer inflation at the all-India level:

So, food accounts for over 59% weight in rural areas and only 37% in urban areas. The all-India level is nearly 50%. Food thus accounts for a major component of retail inflation.

In other categories, housing has a weight of 22% in urban areas – a clear indication of how rising real estate prices could be affecting the people in urban areas while it has no weightage in rural areas.

The weightages are based on the average monthly consumer expenditure based on the 61st round of NSS(2004-05). And the base year for the calculation is 2010 (January-December).

So, when the Government said consumer inflation was 9.87% in December, here is how it was calculated: 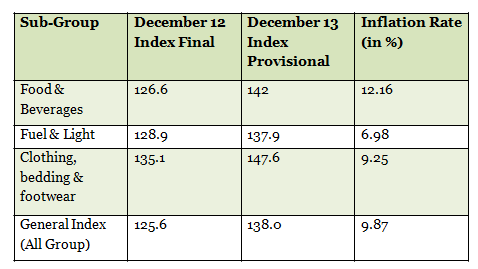 The overall consumer inflation is 9.87% based on 12% inflation in the food basket and nearly 7% in the fuel and light sector.

The concern on high retail inflation is all pervading, from the Government to Reserve Bank to economic research groups. Prime Minister Manmohan Singh, in his press meet on January 3, said: “We have not been as successful in controlling inflation as we would have wished. This is primarily because food inflation has increased. However, we should remember that those who produce food gain from higher prices. Also our inclusive policies have put more money in the hands of the weaker sections.

“To keep food prices in control, we need to increase supplies and also improve marketing arrangements and logistics. This is especially important for items which are perishable, such as fruits and vegetables. Much of this work lies in the domain of the States.”

Prime Minister Singh went to add that while the worry about inflation is legitimate, we should also recognise that incomes for most people have increased faster than inflation.

Deepak Mohanty, executive director, RBI, while delivering a speech in Mumbai on January 13, said: “A disturbing feature of the current episode of inflation is that it has been accompanied by high food inflation, which hurts most the poor and the low-income strata of our society.”

He went on to add: “Since the food economy is essentially dependent on domestic production, fluctuation in agricultural production has a direct bearing on output and inflation. It is important, however, to note that the adverse impact of a fall in agricultural output is significantly less on GDP than on inflation because it still has a very high weightage of food in our price indices. And demand seems to be one of the factors driving the prices of protein and vegetables.”

Subir Gokarn, director of research, Brookings India, in a TV interview on January 14, said that cereal inflation, particularly rice, is concerning, and even a hint from the Government that it can release stock to ease prices can dampen inflationary expectations.

So, consumer price inflation could continue to dominate the headlines till it is within a comfortable range. And fact is till food prices continue to be high or rise, you will most likely feel inflation is skyrocketing, whether it is a shade under 10 per cent or not.