New Delhi: Not a single child in Bihar’s Gaya district has availed of benefits under the sponsorship programme of the Integrated Child Protection Scheme, which aims to keep children in school and prevent child labour and trafficking.

In 2018, New Delhi-based public policy research institute Accountability Initiative had identified 342 vulnerable children to be sponsored in six villages of Gaya, considered the hotbed of child trafficking in Bihar.

A year on, not a single child had been sponsored, as per local NGO Justice Ventures International, and the chairperson of the district child welfare commission.

The sponsorship programme, funded by the women and child development ministry, offers Rs 2,000 per month to families of children who are extremely vulnerable and living in poverty.

But the programme has seen little uptake in Bihar, where 450,000 children worked for six months or more in a year, and 630,000 worked for up to six months a year, a 2017 State Action Plan for Elimination of Child Labour based on Census data said.

Sitamarhi district had sent 200 such applications to the Bihar government, none of which was approved, according to Adithi Organisation, an NGO that operates out of Patna and works in 18 districts of Bihar.

In the Sheohar block of Bihar, 64 children were given sponsorship in 2018, according to Centre Direct, a children’s NGO based in Patna and working in Gaya, Sitamarhi and Sheohar. Local activists said this was due to Sheohar’s proximity to Muzaffarpur, where an incidence of sexual abuse of 11 girls in a shelter home had come to light in May 2018.

“The implementation of the sponsorship scheme depends on the local officers and the interest of the district child protection unit, which in Sheohar block was possible due to well coordinated efforts by the civil society and government officials,” said Suresh Kumar, executive director, Centre Direct. 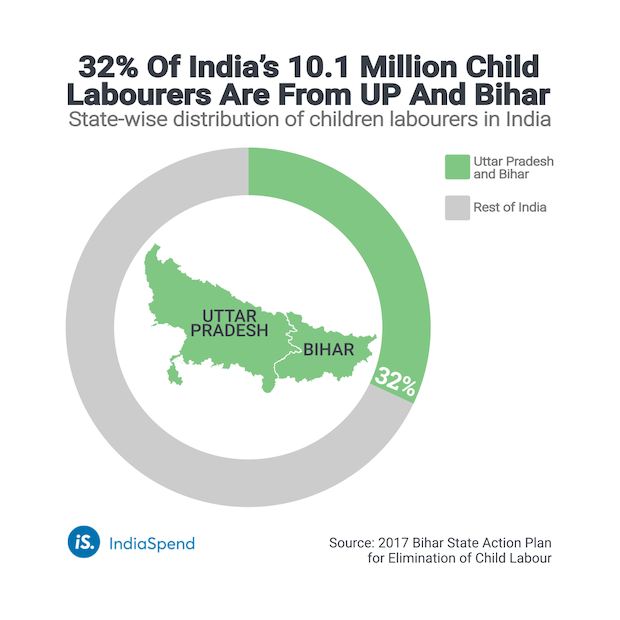 Sponsorship scheme, and why it is needed

“The families worst affected [by child labour and trafficking] are the most downtrodden, and voiceless from the mahadalit community in Bihar,” said Deenanath Maurya, field coordinator with Justice Ventures. The community has no socio-economic security--most of them work for daily wages and are involved in agricultural seasonal labour. In most cases, families willingly send their children out to earn.

Gaya, 120 km south of the capital city of Patna, is the hotspot of child labour and trafficking, from where most children migrate to other states for work--6.4% of its children (8,438) are in paid work, according to the action plan.

“Children are trafficked to Jaipur and employed in the bangle-making industry. They migrate to places like Telangana and Hyderabad to work in brick kilns,” said Zaid Hussain, programme manager with Justice Ventures International. “Gaya had the highest number of such children, it's endemic and the government is not doing enough.”

Children who are rescued and brought back home are in danger of being trafficked again without a proper rehabilitation plan. “There are established networks of traffickers in the community, mostly well known to the family,” said Hussain. “When a child is rescued and brought back, even before they are contacted by the government social workers to admit them in schools, they are trafficked again. Government’s response system is slow.”

In the towns of Sherghati and Dobhi in Gaya, 160 children returned home after being rescued from a Jaipur bangle-making factory; 22 were trafficked again due to government’s failure at giving timely rehabilitation, Justice Ventures’ representatives said, emphasising the need for the sponsorship programme.

Parameters such as the type of residential locality, social deprivation and occupation decide the eligibility of the child to receive sponsorship. Families can only receive the benefit if they can prove their eligibility through an income certificate, and have a bank account. The family’s income should be less than Rs 36,000 per annum in metro cities and Rs 30,000 per annum in other cities. For families in rural areas, the limit is Rs 24,000 per annum. No child receives more than Rs 2,000 even in dire need, and is eligible only for a maximum of three years. This sponsorship support is provided to a family so that the child continues to remain at home and goes to school. Families are also given free counselling.

A 2018 pilot study by Justice Ventures International in six villages of Gaya district identified 57 orphaned children, 36 alcohol/drug addicts, 51 migrant children, 17 threatened by child marriage, 122 children out of school and 37 child labourers. For these children to receive sponsorship, 834 people (children and their parents) submitted their documents. No sponsorships have been given to any child in Gaya district yet, Rajesh Ranjan, chairperson of the child welfare committee in Gaya, told IndiaSpend.

Each village is supposed to have a child protection committee to map children in need of sponsorship services and to facilitate them in availing of benefits.

Several villages formed a child protection committee only after March 2019, long after the district office in Gaya issued a directive to block development officers in July 2016, according to a 2019 baseline survey by Accountability Initiative, a New Delhi-based public policy research institute.

Across Gaya district, there were “hardly any well-functioning committees”, the baseline survey found. Government officials had not conducted trainings among villagers or panchayat heads regarding child care and protection, and block child protection committees were unaware whether all villages within the block had committees or had conducted any training, the survey found.

“The village, block and district level child protection committees’ main function is to identify children who are vulnerable but the committees at all three tiers were unaware about their responsibilities and how to help children in need of care, making the prevention part of scheme inadequate,” said Mridusmita Bordoloi, senior researcher at the Centre for Policy Research (CPR), a New Delhi-based policy research organisation. “Moreover, members of the committee saw their role as an additional responsibility as they were already handling other programmes related to child development and did not give this a priority.”

The Bihar government did not share the data with CPR, Bordoloi said: “For over five months we were in touch with the state ICPS office, Gaya ICPS office but due to the CBI enquiry of the Muzaffarpur shelter home incident, the data regarding fund allocations under different components of the scheme was not given to us.”

In 2018-19, the district child protection committee spent Rs 25.8 lakh on its own administrative and other expenses, nearly three times the Rs 8.9 lakh it spent in 2017-18, the survey found, based on data from the Department of Social Welfare.

The sponsorship scheme is laden with administrative difficulties and paperwork, making it difficult for families to enroll. Orphaned children and children of single parents have to furnish the relevant death certificate. “We are talking about communities which have no basic education. It is very unlikely that they have birth certificates,” said Maurya.

The scheme requires the child and the caretaker to have a joint bank account to receive the monthly conditional cash transfer, which is contingent upon the child going to school. But most children that the pilot study identified as worthy of sponsorship were out of school. For others, there have been cases of fingerprint authentication failure when using Aadhaar cards (which have to be ‘seeded’ with bank accounts to receive direct benefits transfer), as most parents are farm workers whose fingerprints are known to fade. Such cases of authentication problems and benefit denial have been widely reported from across the country.

Every family also has to furnish an income certificate from the village panchayat to avail of benefits. Only families with an annual income of, as we said, less than Rs 24,000 in rural areas and Rs 30,000 in urban areas are eligible. “Families are not given income certificate easily,” said Hussain of Justice Ventures. “Especially [in the case of] villages enrolled in MGNREGA [national jobs programme] scheme, the sarpanch does not give a lower income certificate as it reflects badly on the gram panchayat. In a lot of cases, the income in the certificate is inflated making them ineligible for the scheme. Panchayat members need to understand their responsibility. If every vulnerable child under the threat of getting trafficked is identified at the village level by the child protection committee, it will save lives.”

In Motihari district of Bihar, no child welfare committee has been formed at the district level, Abhishek Kumar, field coordinator with the Institute for Developmental Education and Action, an NGO working in Motihari, told IndiaSpend. This has made the ICPS scheme come to a complete standstill. The child development officer has to fulfill the functions of the child welfare committee. “We have repeatedly written to the district magistrate and state level child protection committees in Patna, no steps have been taken in this regard,” Kumar said.

Not enough money to go around

Each district gets Rs 10 lakh per annum. This is only enough for 41 children, whereas the actual number of children in need is much higher, NGOs say.

Yet, in reality, “90% of the funds are unutilised because the applications received by the committee are incomplete”, said Rajesh Ranjan, the chairperson of the child welfare committee, Gaya. “We do get in touch with the banks to make the process easier for the children but the banks do not cooperate. The income certificate is also difficult to furnish. This acts as a hindrance for us to approve applications. Only when the committee gets proper applications will we be able to tell if the allocation is sufficient,” he said.

Bihar’s existing Parvarish scheme, which pays Rs 1,000 a month to families of vulnerable children until the child turns 18, has better uptake, Ranjan said, adding that there was a need to avoid overlap with the central scheme.

Also, the central scheme has some design flaws that must be fixed, Maurya of Justice Ventures said. For instance, it sponsors a child for a maximum of three years, after which the children are again vulnerable to child labour and trafficking. Once sponsored, a child should be supported up to the age of 18, he said.

The counselling services offered by the Rashtriya Kishor Swasthya Karyakram (adolescent health programme) could be roped in to help children in vulnerable situations, and keep them from child marriage and child labour. “But adolescent-friendly health clinics are opened at the block level [not at the village level], so no child is benefiting from it,” said Parineetha Singh of Adithi Organisation.

At the same time, there are cases where sending children back home is not the best option. “As important as strengthening families through sponsorship is, through these years we have seen that some children are in urgent need to be placed in shelter homes and childcare homes,” Kumar from Centre Direct said. “It is not always in favour of the child to be placed back with the family immediately, for instance if they are found begging or in child labour and trafficking.”

On the other hand, Kumar said, the sponsorship scheme should also be extended to children who are released from childcare homes and placed with their families. “[T]hey essentially are being turned back to the same environment they came from and intervention here is crucial,” she said.

(Ali is a reporting fellow with IndiaSpend.)