How To Enable MSMEs To Recover From The Lockdown

Bengaluru: In the aftermath of the COVID-19 epidemic and two months of stringent lockdown, India now faces the crises of unemployment and business closure, particularly in the micro, small and medium enterprise (MSMEs) sector. A new report by the Council on Energy, Environment and Water (CEEW) and the National Institute of Public Finance and Policy (NIPFP) has proposed that MSME recovery can be speeded along by:

Among other issues about economic recovery, the report has noted that the reshaping of the economy needs “a new social contract between the state, the citizen and the enterprise” which, it says, rests on “two pillars: commitment to jobs, growth, and sustainability; and a razor-sharp focus on tail-end risks”.

In May 2020, the government announced a Rs 20-lakh-crore ($266-billion) Atma Nirbhar package including a slew of announcements to support the MSME sector, including provision of emergency working capital, creating a dedicated fund with a Rs 10,000-crore corpus, among other measures.

Implementing these “will not be easy” and “financial aid to MSMEs would not be effectively distributed because of challenges with identifying and targeting those most in need”, said the report.

A 5% contraction in the Indian economy is expected this fiscal, noted a June 15 press release from CRISIL, a credit rating agency, which “will significantly hurt MSMEs”. The fall in revenue “will be steeper at 17-21%” for MSMEs compared to the formal sector, it added.

In June 2020, the Centre approved a change in the definition for MSME, increasing the limits of capital and turnover for companies to qualify for each category. For example, the definition of micro manufacturing unit and services was increased to Rs 1 crore for investment and Rs 5 crore for turnover.

India has an estimated 63.4 million unincorporated non-agricultural MSMEs, of which 99% are micro-sized, 0.33 million are small, and 5,000 are medium, noted the report. But the challenge is accurate identification of MSMEs, particularly those that are informal one-person or micro enterprises, and of their informal arrangements of employing workers with little or no records.

India’s estimated 450 million informal workers comprise 90% of its total workforce, with five to 10 million workers added annually, and nearly 40% of employed with MSMEs, said the report.

The report suggested the creation of a real-time information system to identify beneficiaries of government schemes, to be called MSME Information System for Holistic and Real-time Identification, Incentives and Support, or MISHRII.

“A key pillar of India’s economic recovery would also be the ability of its MSMEs to bounce back and find new markets within India and abroad,” said Arunabha Ghosh, CEO, CEEW in a press release.

Microenterprises have the potential to spur job creation, IndiaSpend reported on November 4, 2019. They create 11% of jobs in India, which is significantly less than the 30%-40% in other developed and developing nations. Indian microenterprises have “low output elasticity of employment that is seen in the organised sector”, implying that despite effective growth in value addition in the sector, job opportunities grew little, the November 2019 report noted.

The CEEW-NIPFP report recommended a new MSME census and issuing of unique business identification numbers to recognise and reference MSMEs. The last census was conducted in 2006-07.

While the government’s package of Rs 3.7 lakh crore ($49.1 billion) for MSMEs “can provide them much needed liquidity”, beneficiaries must be decided based on a vulnerability assessment framework, said the report.

The revival of the MSME depends on tackling vulnerabilities such as financial condition, demand for products and services, availability of migrant workforce, and exposure to the export market. Textile manufacturing, chemical, and metal products are the most vulnerable, the report added.

Textile Manufacturing, Chemical, And Metal Products Are The Most Vulnerable 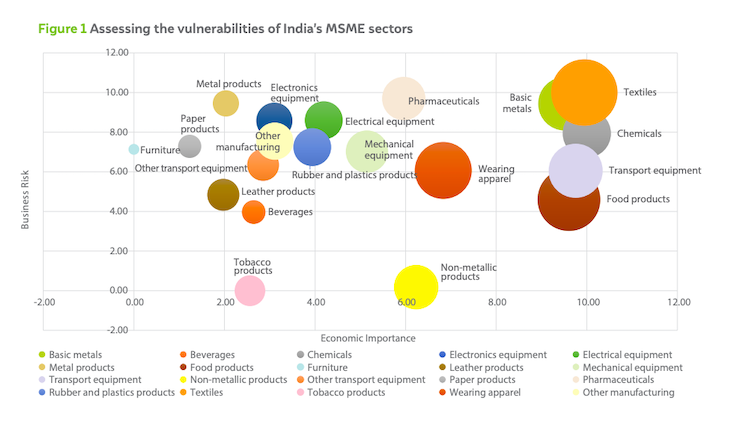 Pending payments in MSMEs rose from 8.6% in 2010-11 to 9.5% in 2015-16, IndiaSpend reported on November 1, 2019. It is the second-most severe problem faced by MSMEs, the first being a fall in demand. Policymakers should focus on improving creditworthiness of small businesses, identifying vulnerable enterprises and clearing pending dues, Ghosh said in the press statement.

The Ministry of Micro, Small and Medium Enterprises’s Samadhaan portal to address delayed and pending payments by PSUs, central ministries and state governments was launched in 2017.

The government had announced on May 13 that MSME receivables from the government and central public sector enterprises would be released in 45 days. The government “should prioritise clearing the receivables of all MSEs who are long-term suppliers with a good track record on a provisional basis” in order to resolve delays, the report said.

The issue of “low creditworthiness” is a problem of the MSME sector. One of the solutions is to ask lenders to create “a mechanism to track the fund utilisation and financial health of the borrowers on a monthly basis, and intervene at the first signs of distress”, the report noted.