Why Small Businesses That Employ 111 Million Fall Into Debt Trap

New Delhi: The 2019-20 budget had proposed a new payment platform for India’s micro, small and medium enterprises (MSMEs)--defined as enterprises whose investments are under Rs 10 crore in the cases of manufacturing units and under Rs 5 crore in the case of service units--to enable filing of bills and online tracking of payments from government agencies, a major source of their cash flow. But to make the new platform effective, some problems with the existing online systems must be addressed, as per an ongoing study.

MSMEs have a more acute problem with delayed payments than with access to credit, we observed while researching for a study titled ‘Understanding Criticality of Flow of Funds for Robust Growth of MSMEs’ at the Institute for Studies in Industrial Development (ISID), a New Delhi-based policy research centre.

In 2015-16, India had 63.4 million MSMEs employing 111 million persons, according to National Sample Survey data cited in the MSME Annual Report 2018-19. MSMEs constitute 45% of India’s manufacturing output and 49% of its exports, while employing 30% of its workforce. Delayed payments often push them into a debt trap, sickness and failure, shows our analysis of National Sample Survey data.

Pending payments in MSMEs rose from 8.61% in 2010-11 to 9.5% in 2015-16, according to our analysis of the data used in the 67th and 73rd rounds of the National Sample Survey of “unincorporated non-agricultural enterprises”. It is the second-most severe problem faced by MSMEs, the first being a fall in demand. However, the existing platforms (MSME Samadhaan and Trade Receivables Discounting System (TReDS)) for MSEs (micro and small enterprises) are riddled with problems that result in delayed payments.

Government payments to suppliers and contractors being a major source of cash flow for MSMEs, removing payment delays would enable MSMEs to make appropriate investment decisions, while improving their access to finance and marketing, the study found.

All the 36 states/union territories in India have constituted Micro and Small Enterprise Facilitation Council (MSEFC) for the settlement of disputes on getting references/filling on delayed payments, as mandated under the the MSMEs Development Act 2006. The buyer is liable to pay a monthly compound interest to the supplier at three times the bank rate notified by the Reserve Bank of India (RBI) if the payment is not made within 45 days of the day of acceptance of the goods/service or the deemed day of acceptance.

All specified companies that delay payments are required to file a half-yearly return to the Ministry of Corporate Affairs (MCA) stating the details of the dues and giving reasons for the delay, as per an MSME ministry notification issued in November 2018. In January 2019, the MCA also directed all specified companies to file a form, MSME-I, containing the details of all micro or small enterprise suppliers.

But, as per the notification, these regulatory provisions do not apply to medium enterprises which constitute 0.01% of the MSME category.

So far, 27,693 applications involving dues worth Rs 7,212.23 crore have been filed by Micro and Small Enterprises (MSEs), according MSME Samadhaan portal. However, of these, only 1,532 applications have been disposed of by micro and small enterprises facilitation council (MSEFC) while 4,474 applications were rejected. Further, 2,241 cases were mutually settled with buyers while 7,447 cases are currently under consideration by MSEFC.

As we mentioned earlier, medium enterprises are not eligible to submit applications at Samadhaan. And only MSEs having Udyog Aadhaar Number (UAN), a unique identity number obtained after registration for Udyog Aadhaar Memorandum (UAM), are eligible to apply at the portal.

MSMEs’ registration for UAM started in September 2015. But only around 7.7 million MSEs have registered so far. Given that there are 63.3 million MSMEs, this indicates that only around 12% MSMEs are eligible to apply to Samadhaan.

The RBI also introduced an online platform, TReDS, in March 2014 to facilitate discounting of bills and invoices of MSME suppliers. This is a financial arrangement wherein a seller recovers an amount of the sales bill from a financial intermediary, after paying a discount/fee, before it is due.

Receivables Exchange of India Ltd (RXIL), the first TReDS platform, was incorporated on February 26, 2016. The ‘Strategy for New India @75’, prepared by NITI Aayog, clearly states that the Department of Public Enterprises should ensure the registration of all public sector units on TReDS portal.

However, this is a somewhat lengthy process because it involves many stages and interactions between the three parties, the study found. Further, the discounting and financing charges are borne by the MSME suppliers, reducing their earnings. This discourages many MSMEs from using the TReDS portal and forces them to approach informal financers for invoice discounting that allows immediate payment.

Further, as per the November 2, 2018, notification by the MSMEs ministry, only companies registered under the Companies Act 2013 and reporting a turnover of over Rs 500 crore (and all Central Public Sector Enterprises), can board the TReDS platform. This ends up excluding many MSMEs.

Both central and state governments have announced well-publicised schemes to promote the growth of MSMEs--for example, PMEGP which provides government subsidy for meeting the project cost partially, MUDRA Yojana which aims to develop micro enterprises by providing various kinds of support including refinance and MSME59, an initiative for processing loan applications of MSMEs and sanctioning them in under 59 minutes, MSME Samadhaan which aims to address the issue of delayed payment from government agencies, TReDS portals which provide factoring services in case of delayed payment, etc.

However, these schemes have overlapping objectives--to address MSMEs’ financial problems--and this leads to confusion among beneficiaries as well as implementing agencies. This also increases administrative costs as each scheme requires its own staff and setup to deal with beneficiaries. Therefore, there is a need to simplify these schemes and policies.

Our research at the ISID suggests a single-window solution would address the problem of delayed payments from both government and market players by encompassing online payment, invoice discounting and delayed payment redressal (Figure 1).

Both buyer and seller could register at the online payment platform. After a business transaction and uploading of invoices by the seller, MSMEs may opt for invoice discounting if payment from the buyer cannot be realised immediately or within the agreed time period.

Further, if there is any delay in payment as per statutory guidelines, the issue should automatically move to Samadhaan for redressal with an alert to both the buyer and the supplier. Many entrepreneurs remain unaware of the MSME online platforms, so there is also a need for awareness campaigns.

This system would work best if all MSMEs are eligible for registration and its process is speedy and simple. 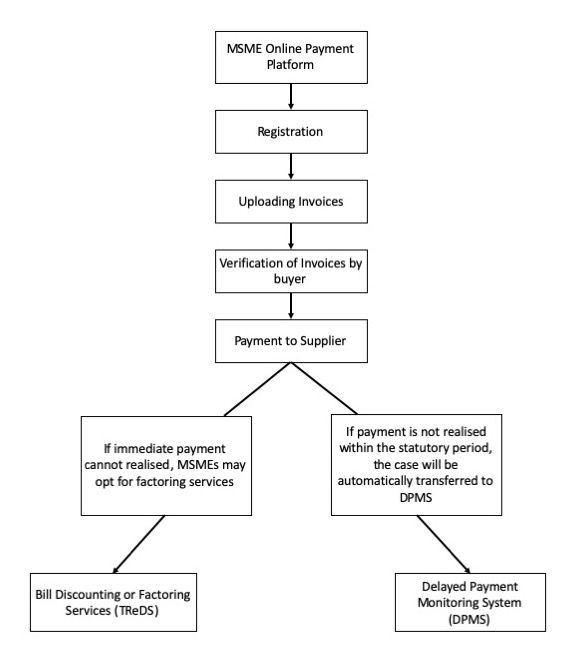 (Sharma is an Assistant Professor at the Institute for Studies in Industrial Development (ISID), New Delhi.)