How Many Murderers Are We Electing To Parliament? 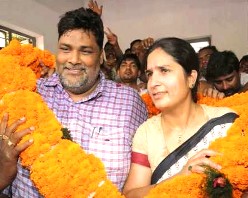 India has a large proportion of criminals in politics who also get elected through the democratic process.

The latest statistics following the recent Lok Sabha elections stand like this: there are 186 Members of Parliament (MPs) who have criminal cases against them, nearly 34% of the total elected MPs. This number is the highest ever. What is relevant however is the distinction between serious crimes and the rest. Put somewhat dramatically, how many murderers are we electing to parliament ?

The Bharatiya Janata Party (BJP), which will assume power on May 26 by leading the National Democratic Alliance (NDA), has the maximum number of MPs with criminal charges against them. On the other hand, if you were to look at the collective numbers, serious criminal charges like murder, rape and kidnapping are declining.

Let’s now see the number of candidates with criminal records who contested for elections and how many of them were elected. As per data analysed by Association of Democratic Reforms (ADR), 15% candidates had a criminal case against them. This number has actually fallen from the last election i.e., 17% candidates analysed by them had criminal cases in the 2009 elections.

Most MPs are public figures and often have to face criminal charges in course of their public life. It is necessary here to make a distinction between serious criminal charges like murder, rape and kidnapping and criminal cases like defamation. The following graph shows the number of MPs with serious charges against them in the last three elections.

The following graph shows the break-up of serious charges leveled against MPs.

We can see that maximum number of MPs (16) had cases of assault leveled against them. Assault charges include disruption of public life, assaulting a public servant and rioting. The second most serious charge on the list is attempt to murder. There are a few MPs who have robbery, dacoity and extortion charges filed against them.

Professor Trilochan Shastry of ADR said electing so many MPs with criminal records will not lead to any kind of positive change. "One of the main reasons for such people getting elected is lack of awareness among the voters. There is need to educate them about their candidates. One way could be putting up the criminal records of the candidate right outside the polling station," he said.

Let us now look at the state-wise picture:

Table: Maharashtra MPs Have Maximum Cases Against Them, 2014 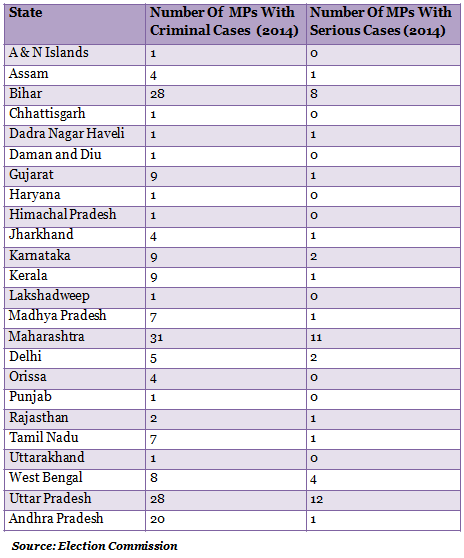 Finally, here is a look at the top 5 political parties that have the highest number of criminal MPs.

Professor Shastry feels political parties are no longer the solution to the problem. "Their race to win votes has made them a part of the problem."

Even though the data might seem shocking, it is actually an improvement over the last elections. A worrying trend, however, is that most of the serious charges leveled against MPs are that of assault, and especially assault against a community or public servant. One has to wonder what regard for authority such leaders will have once they are in power.

(Note: the numbers in the article have been updated to reflect the correct nos as we had under reported the number of MPs with criminal charges.)