Heat May Kill More People Than Major Diseases By 2100: Study

New Delhi: In a warmer world caused by climate change, the possibility of your dying from excessive heat will depend on which country you live in and whether you have the money to keep heat at bay with air conditioning and heat-resilient infrastructure, says a new global study linking temperature, income and mortality.

Poor countries that are closer to the equator will see more deaths from rising temperatures compared to richer countries that may also be experiencing similar temperatures by the end of this century, since the latter will have more money to spend on climate adaptation--such as air conditioning and heat resilient infrastructure--the study by Climate Impact Lab, a US-based consortium of climate scientists and experts, estimates.

Calling this the “starkest finding” of the study, Amir Jina, one of the co-authors, told IndiaSpend that countries that are poorer today will “not only get worse impacted as the world warms but they will also be less able to afford adaptation, leading to the projection of a lot of extra deaths”. In wealthy countries, people can pay to avoid the worst health impacts of climate change, stressed Jina, an assistant professor at the University of Chicago’s Harris School of Public Policy.

Even in a positive global scenario of growing country incomes and increased spending on adaptation, the study estimates excessive heat will cost 73 extra deaths per 100,000 people annually by the end of the century, if emissions of greenhouse gases rise unchecked. This is the current death rate for several major infectious diseases combined, including tuberculosis, HIV, malaria, dengue and yellow fever, data from the World Health Organization (WHO) show.

Countries like India that have large numbers of poor people and are also vulnerable to the worst effects of rising temperatures, will suffer the most. Independent Indian experts we spoke to said that the study is an important call to early action in reducing emissions, and provides a much-needed focus on mortality in the context of climate change, which has been under-estimated. However, its assumptions and findings need to be refined further in a country-specific context, they said.

In a high emissions scenario, temperature increases could lead to 221 additional deaths per 100,000 every year globally by 2100, the study found. This is the same as the current annual death rate for all cardiovascular diseases, according to WHO data.

But the study also found that if the income of countries continues to grow and that leads them to spend more on climate adaptation, the world could achieve a two-thirds reduction of this figure.

First, the researchers estimated that if the future income growth of countries was accounted for, the mortality risk posed by a hotter world dropped by about 53% from 221 to 104 additional deaths per 100,000 annually by 2100.

Further, if this income growth also led to climate adaptation measures, the mortality risk would drop even further to 73 additional deaths per 100,000 annually by the end of the century, they found, reducing the 221 per 100,000 estimate by 67%.

But even in this best case scenario, the death rate would match the one for all major infectious diseases combined today, as we earlier stated.

The climate adaptation required to achieve this 73 per 100,000 figure is costly and it would only be fair, the researchers felt, to include this cost while assessing the total impact of climate change in the future. According to their calculations, the cost of future climate adaptation can be converted to an equivalent of 12 deaths per 100,000. Calling this the “full mortality impact of climate change”, they estimated it to be 85 additional deaths per 100,000 by the end of the century, in a high-emissions scenario.

The numbers became less alarming as researchers calculated the full mortality impact of climate change of a moderate-emissions regime (leading to a predicted 2.4 degree Celsius (°C) level of global warming by the end of the century) over a high-emissions one. The full mortality impact from climate change-induced heat would fall by 84% to 14 additional deaths per 100,000, they estimated.

This shows that “the benefits of greenhouse gas reductions are large”, the summary of the study published by Climate Impact Lab noted. Talking of the 2.4°C warming scenario, the summary said that “even mitigation efforts that fall short of the long-term targets of the Paris Agreement [limiting global warming to 2°C] would cut the projected mortality costs of warming.”

The global economic loss of additional heat-induced deaths, in a business-as-usual scenario of greenhouse gas emissions, will cost the world 3.2% of its economic output by 2100, the study found. 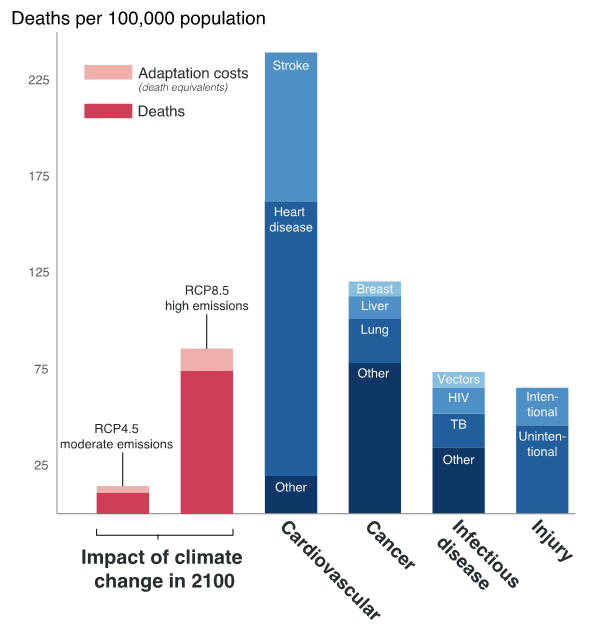 India is the fifth most vulnerable country to climate change, with about 600 million Indians--about half the population--at risk from the fallout of a rise in global mean temperature, with the poorest bearing the brunt.

Further, India is warming up: Greenhouse gases (GHG), the primary culprit in global warming, which are produced by human activities, have already caused an increase of 0.7°C in India’s average temperature in 118 years to 2018, and even in a best-case scenario, the temperature is expected to rise by 2.4°C by the end of this century according to Indian government’s own assessment, IndiaSpend reported on July 2, 2020.

The scientific consensus is that global warming must be limited to 1.5°C by 2099 to avoid the worst predictions.

The 0.7°C rise, though just a fraction of the projected temperature rise over India during the next 80 years, has already had severe consequences, including record high temperatures, more frequent and intense heat waves, erratic rainfall often coupled with floods, more cyclones, and erosion of the coastline due to a rise in sea-levels. (Read IndiaSpend’s series of reports from India’s climate change hotspots.)

According to the last official estimate of poverty (from 2011-12), 22% of the Indian population lives below the poverty line. Climate change will reduce the living standards of 600 million Indians located in the country’s poorest areas, said a 2018 World Bank report. Further, acting as a multiplier, climate change could push 45 million Indians into extreme poverty, according to another World Bank report from 2015.

Heat waves, caused by India’s increasing temperature, killed about 6,167 people over eight years to 2018, according to official data. Such deaths, however, are massively under-reported, IndiaSpend reported on June 16. Within 50 years, 1.2 billion people in India will live in areas as hot as the Sahara, if greenhouse gas emissions keep rising.

“India is uniquely at two frontiers,” said Jina, the co-author of the new Climate Impact Lab study. “On the one hand, it's currently a very hot country on average and there are high rates of poverty--these combine to show that the impacts will be worse and adaptation will be less easy to pay for,” he pointed out.

“On the other hand, India is going to emerge in the coming decades as one of the major emitters of CO2 among all nations,” he continued. “There are almost no other countries that are both major emitters and at the forefront of negative impacts,” he said.

Thus, India’s steps on cutting its emissions would greatly help its own poor population living in hot areas, he stressed, and would make a global impact. “India has a unique and central role to play in global efforts to reduce emissions,” he said.

Due to the lack of age-specific mortality rates for Indians, the new Climate Impact Lab study has not used India’s data in their main calculations for assessing and projecting additional heat deaths caused by climate change. (Age is key to defining the mortality-temperature relationship in the report.)

Indian data have, however, been used to verify the overall projections on mortality deaths made in the study.

Under a high-emissions scenario, mortality costs for India in the last two decades of the century due to rising temperatures would be equivalent to 4% of the economic output, according to an interactive map prepared by the Climate Impact Lab as a part of their study.

A 2019 study by the Climate Impact Lab and the Tata Centre for Development had said that extreme heat caused by climate change would result in 1.5 million additional Indian deaths every year by 2100 in a high-emissions scenario.

The study has tried to quantify the damage caused by every additional ton of CO2 emissions. In any country, “the present-day value of emitting an additional ton of CO2 is $36.6 (Rs 2,700) per ton under a scenario of continued high emissions”, it said, adding, “Stated another way, we should be willing to pay $36.6 per ton today to avoid the future mortality consequences of climate change.”

Under a moderate-emissions scenario, the damage falls by over 50% to $17 (Rs 1,260) per ton CO2 emissions. This cost is “an important benchmark in thinking about the cost of emissions, and reducing those emissions today”, said Jina.

“This study estimating the human and economic costs of climate change plays an important role in making a strong case for early action,” said Minal Pathak, a senior scientist with Ahmedabad University and the Intergovernmental Panel on Climate Change, a United Nations’ arm tasked with assessing the science on climate change. The global ambition to limit warming to 1.5°C required much higher ambition, she pointed out.

However, while agreeing that future climate change would have severe impacts on India, she said she would not “take the mortality number from this study at face value”, referring to both the projected world averages in the 2020 report and the projections for India in the 2019 one. She cautioned that a global study of this kind relied on a range of assumptions and one had to be careful in applying these numbers for any specific country.

For instance, she pointed out, the temperature threshold for classifying a day as very hot in the study is 35°C, whereas the India Meteorological Department assumes 40°C as the threshold for classifying a heat wave [in the plains]. Similarly, the other assumptions used in the study regarding the “affluence of future populations, healthcare systems, vulnerability of populations, etc.” need to be looked at carefully, she said.

Referring to the 1.5 million annual deaths estimated in the 2019 study on India, Pathak said, “We need to undertake more refined studies to be able to arrive at a better numerical estimate.”

The Climate Impact Lab studies were useful, she added, for conceptualising and providing a methodology for carrying out such an assessment.

Abinash Mohanty, an expert on climate change at the Council on Energy, Environment and Water, a Delhi-based think-tank, agreed with Pathak on the limitations of country-specific socio-economic assumptions made in the study. “The scope of the study, however, can be further widened to other sectoral and socio-economic indicators to estimate the impacts,” he told IndiaSpend.

“The study highlights a major research gap--that mortality has been underestimated in the past and recent past while assuming the impacts of climate change,” Mohanty said.

Since the study had not integrated India-level data into its models and assessments due to a lack of qualitative data for India, he said that “India-level downscaling will be required” to make sense of the findings for India. He also pointed out that, climatologically, the study considers temperature as the only base of mortality assessment, ignoring other indicators such as humidity, which play a very pivotal role in thermal comfort and health.