New Delhi: A unique emissions trading system being piloted in Surat, Gujarat, has achieved a 29% drop in deadly particulate pollution generated by industrial plants while cutting costs, the first evaluation of the scheme has found.

The Emissions Trading System (ETS) launched in July 2019 by the Gujarat Pollution Control Board (GPCB) is billed as the first such scheme, not just in India but the world, for particulate pollution.

One hundred and fifty-eight plants in the industrial hub have signed up for this “cap and trade” scheme. Industrial clusters are set a limit on how much particulate pollution they can collectively emit; they can then either install equipment to cut their emissions, or purchase credits from those that do, to keep their collective emissions down. It began live trading on September 15, 2019, after two months of trials.

An evaluation of the scheme, released on October 18, 2019, suggested that the flexible character of the market-based scheme allows the participating plants to save a large part of what they spend on complying with relatively rigid government regulations, without compromising on environmental standards. For example, it said they could potentially save more than a third of the annual cost of installing pollution control equipment and thereby boost their profits.

This cost-benefit analysis, based on survey reports from each of the 158 units, mostly textile and dye mills, was done by researchers from the Energy Policy Institute of the University of Chicago (EPIC-India) and the Economic Growth Center at Yale University (EGC-Yale), USA, two of several institutions involved in shaping the scheme.

"This first look at the programme finds that [it] is projected to both foster economic growth by reducing industries' compliance costs and improve people's health by reducing particulate air pollution,” Michael Greenstone, director of EPIC and co-author of the report, said in a statement. “It is bringing Indian environmental policy to the global frontier.”

The ETS allows plants that are able to reduce their pollution cheaply to sell their permits--certificates issued to them in proportion to their pollution load--to others that find it more expensive to comply because of the nature of their production process. In an interview to IndiaSpend in June 2019, Greenstone had stressed the scheme’s potential for being replicated in other parts of the country after proving its efficacy in Surat.

Air pollution caused one in eight deaths and took 1.24 million lives in India in 2017, IndiaSpend reported in December 2018. The country struggles in particular with fine inhalable particles known as PM 2.5 that are especially dangerous to human health. India’s PM 2.5 levels are the fourth highest in the world and nine times the World Health Organization’s prescribed limit. Industries and power plants together contribute about one-fifth of the country’s PM 2.5 pollution.

Before the ETS came into effect, several of the 158 Surat plants were violating pollution regulations, and were collectively emitting 362 tonnes of particulate pollution every month.

After its launch, the ETS set a cap of 280 tons per month on the particulate emissions from these plants. This cap, equivalent to the amount of pollution the plants would have collectively emitted in a month had they complied with the GPCB’s regulations, represents a 29% reduction in their emissions.

The report emphasised that the cap, being based on the total amount of pollution released into the atmosphere, was an improvement on the current regulatory approach, which is “based on how dirty a factory’s emissions are regardless of how many hours a factory operates”. (Under the regulations, the government could, for example, end up levying higher fines on Unit A classified as high-polluting than Unit B classified as low-polluting even if Unit A emitted less overall pollution because it operated for fewer hours.)

How ETS reduces the cost of compliance

The report estimated the average cost for the Surat plants of installing such equipment to curb pollution--referred to as abatement cost--at around Rs 6.5 per kg of pollution load.

However, under ETS, where installation of equipment is not mandatory, the report estimated that these plants would be able to reduce their pollution to the capped level with an abatement cost close to Rs 2.5 per kg of pollution load--or about 60% less.

The report also pointed out that the abatement costs under ETS would rise slowly, and not be overly burdensome, even when the regulator decided to tighten standards and lower the emissions cap. “Because of the ability to buy and sell permits, the cost to plants is gradual,” it said. 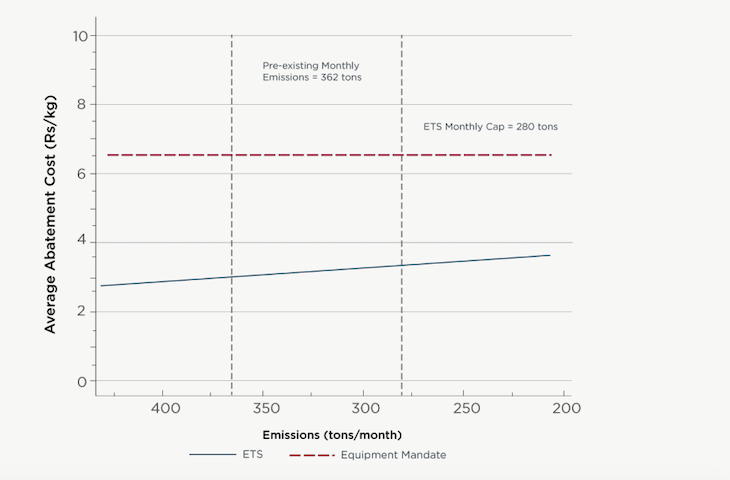 Under the ETS, plants with low abatement costs can make larger reductions in emissions than they need to and profit by selling the excess. Industries with high abatement costs can save money by buying permits instead of installing expensive equipment.

If a plant were to install instruments such as cyclone and bag filters to abate pollution, the estimated annual cost would be slightly higher than Rs 15 lakh, according to the report. By comparison, under ETS, it estimates a plant would spend about Rs 10 lakh annually to trade pollution permits, or 36% less.

Furthermore, about 80% of permits provided under the cap are given away free to industries at the start of the market, in proportion to their pollution load. Since permits have monetary value, this makes the scheme even more profitable for industries, said the report.

This model can provide significant revenue to factories that have low pollution today, since they are likely to have permits available to sell to other market participants, it said.

When comparing the costs of purchasing and operating pollution abatement instruments to the costs under the ETS, the report found that every industry in Surat would be potentially better off.

For more than 75% of the 158 plants, profits are projected to increase by more than Rs 5.5 lakh per year with the average increase in profits being Rs 8.6 lakh per year. “The industries that benefit the most are those that have expensive operating equipment... or those that are able to sell permits,” the report said.

“Importantly, none of these benefits come at the expense of the environmental integrity of the scheme,” it said.

The researchers from Yale University and the University of Chicago, along with others from The Abdul Latif Jameel Poverty Action Lab (recently in the news for the awarding of the Nobel Prize to its founders) will update their analysis from time to time, and will carry out a full evaluation when the pilot ends, in coordination with GPCB.