At least 20 districts that were declared green zones have reported new cases since April 29, an IndiaSpend analysis of data from eight states with more than 50% increase in case numbers has found.

On April 30, the health ministry declared 319 districts--with no confirmed cases or no reported cases in 21 days--as green zones. Based on incidence of cases, doubling rate, extent of testing and surveillance feedback, 130 districts were classified as red zones and 284 as orange zones.

On May 1, the central government extended the countrywide lockdown for two weeks to May 17, providing relaxations in some areas not affected by the disease.

As restrictions were lifted, between May 1 and May 7, India reported a 50% increase in COVID-19 cases to 52,952, and detected two of its highest single-day increases, each of which comprised more than 3,000 cases.

Since May 1, COVID-19 cases in five states and UTs--Tripura, Tamil Nadu, Punjab, Haryana--have more than doubled and have increased by more than 50% in four states and UTs--Maharashtra, Gujarat, Odisha and West Bengal. Chandigarh, Ladakh and Delhi, which have also reported big increases, have not been included in this analysis as their districts are either in red or orange zones.

Of the 53 districts we examined, 20 that were in green zones in Punjab, Gujarat, Maharashtra, West Bengal, Tripura, Odisha and Haryana have gone on to report at least one case between April 29 and May 7. (We analysed state data for green zones from April 29, a day before the centre released data to declare zoning, because the April 30 announcement would have used data up to April 29).

The Union health ministry is expected to release updated district-wise numbers “in a day or two”, said Lav Agarwal, joint secretary at the central health ministry, responding to a media query on the weekly update on zones, during a press conference on May 8. The government has reported that 46 districts have not detected a case in the last seven days and 29 districts have not in 21 days. 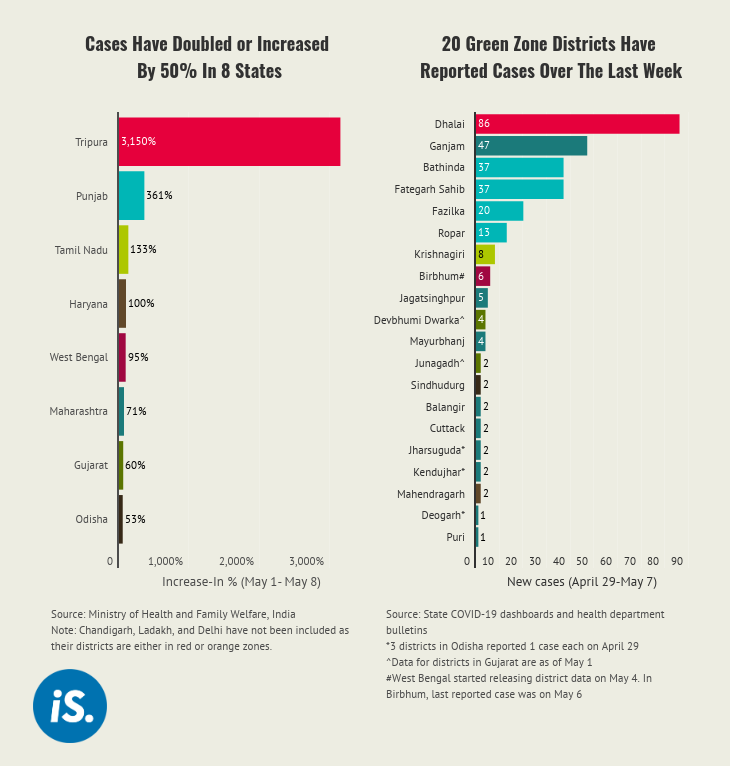 Tripura had reported zero active cases by April 26, and six of its districts were declared to be in green zones. Restrictions were accordingly lifted, but by May 3, it had detected two new cases, and by May 7, 89. Dhalai district, placed in the green zone, reported 86 cases and turned into a red zone, while Gomati (already declared orange zone on April 30) also went on to report one case. (Read our story on eight northeastern states’ preparedness for COVID-19 here.)

Punjab has reported a 361% increase in cases since May 1. All four districts declared to be in green zones--Bathinda, Fatehgarh Sahib, Fazilka and Rupnagar (Ropar)--have reported cases, as per a May 7 state bulletin.

In Odisha, nine of the 21 green zone districts have reported new cases. Ganjam district reported 47 new cases, prompting the state to declare it a red zone; Jagatsinghpur and Mayurbhanj districts were turned into orange zones.

Haryana’s Mahendragarh, declared to be in the green zone, detected two new cases, as per May 7 evening state bulletin of the state. In Tamil Nadu, the only green district, Krishnagiri, also reported a case on May 7.

One green zone district each in Maharashtra (Sindhudurg) and West Bengal (Birbhum) also detected new cases last week. In Gujarat, which has the second highest number of COVID-19 cases in India after Maharashtra, two districts, Devbhumi Dwarka and Junagadh, have reported new cases. Only one district, Amreli, has not reported a confirmed case so far.

The Indian Council of Medical Research started random sampling of patients with severe acute respiratory illness (SARI) from 16 sites across India on February 15. By February 29, 217 patients had been tested and 642 more in the first two weeks of March. None of these patients’ tests had come out positive, ICMR said on March 19, ruling out community transmission.

The study continued until April 2 and in 19 days, 5,052 more patients were tested, of which 104 came out positive; 39% of these did not report a history of foreign travel or contact with an infected person, IndiaSpend reported on April 10.

On March 28, the ICMR said it had stopped random sampling as the March 20 revision in testing strategy indicated that all hospitalised SARI patients have to be tested. No data has been released on how many SARI patients tested after April 2 have tested positive.

On May 6, 47 days after the strategy was revised, health minister Harsh Vardhan said that states had been instructed to test at least 250 SARI patients or people with influenza-like illness per district.

"This is important to ensure that the so-called unaffected districts are actually unaffected,” he said, “Or else we might get a surprise from these districts."

The ICMR is set to conduct a random sampling study in 75 worst-affected districts to ascertain community transmission, Press Trust of India reported yesterday, adding that 400 samples would be tested in each of these districts.

(Shreya Raman is data analyst and Paliath is policy analyst at IndiaSpend.)