Hoping to gradually restart economic activity, the government today said it would start allowing selective relaxation in non-containment zones from April 20. Hotspots that have a high number of cases or where the doubling rate is less than four days will have to remain under restrictions for longer, said Lav Agarwal, joint secretary at the Union health ministry. In containment zones (where there has been a large outbreak), only essential services will be allowed, he added.

India had extended its nationwide lockdown, which was to end on April 14, to May 3.

The government has noted that the effort is to bring back normalcy gradually. While certain activities are being permitted in areas which do not fall within hotspots, clusters, or containment zones, due caution must be exercised to ensure that only genuine relaxations are given.

As the central and state governments try to bring back normalcy, the Federation of Indian Chambers of Commerce and Industry, in a Business Confidence Survey, has suggested that the government provide a financial package for the entire industry (particularly micro, small and medium enterprises) in the form of subsidies, policy support and tax holidays. It has suggested that labour market reforms be taken up on priority and large infrastructure projects be initiated to ensure credit and employment.

In the 11th week of its COVID-19 outbreak, India today reported 1,324 new COVID-19 cases--the second highest single-day increase so far--as well as its highest daily number of recoveries, at 287. In all, India has detected 16,116 COVID-19 cases as of 5 p.m. on April 19, as per the health ministry’s latest update. 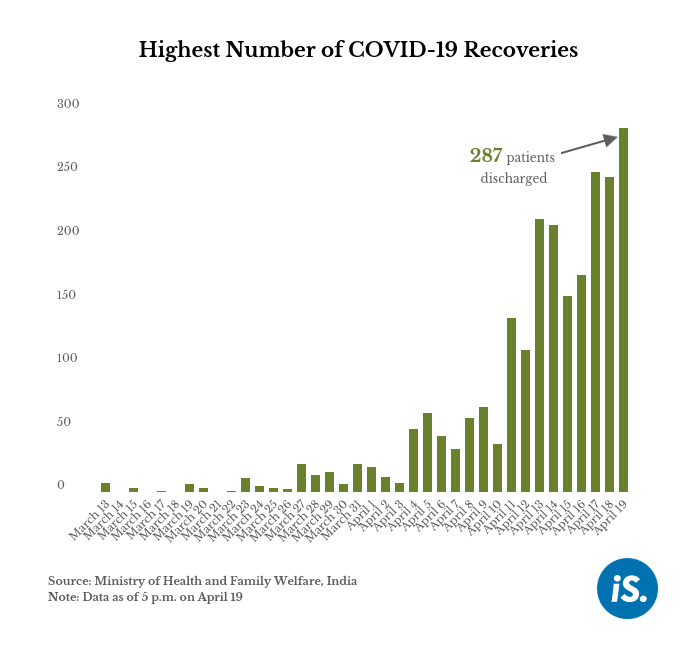 As many as 408 districts of India’s 736 across 32 states and union territories have reported at least one case of COVID-19. Some of the cases that have been detected are yet to be assigned to districts.