New Delhi: India has just two years to double its renewables capacity to 175 GW--and put itself firmly on the path to its target of 450 GW by 2030 under the Paris Agreement. These targets may remain out of reach if the country does not address four key issues that slow down the sector’s growth--tariffs on import of solar parts, irregular flow of finances, shortage of land, and the distressed finances of electricity distribution companies, say experts and new studies.

Considering the current speed of capacity installation and the policy issues ailing the sector, India will reach 450 GW of renewable energy only by 2034, four years past the deadline, according to a new report launched on June 26, 2020, by the consultancy Bloomberg New Energy Finance. By 2034, about 48% of the country’s total capacity mix could be made up of solar, wind and biomass energy.

India currently has 87.67 GW of renewable generation capacity installed, close to a quarter of its total installed capacity of 371 GW. Fulfilling the Paris commitment will help the country reduce its dependence on polluting fossil fuels which hasten global warming. Currently, these fuels are the source of over 80% of India’s electricity.

However, India could be way behind the 175 GW mark even in five years: The country is expected to install 60 GW of renewables capacity by 2025 with a split of nearly 5:1 between solar and wind, said a June 2020 report by another consultancy, Bridge to India. This would take India’s total installed renewables capacity to about 150 GW.

The Bridge to India report interviewed chief executive officers (CEOs) of leading national and international companies from the renewables sector to assess its main challenges. They pointed at almost all demand and supply factors including land, transmission, debt financing and import duties.

Of the 60 GW grid-connected capacity, 34.91 GW of solar capacity has been installed as on May 31. Another 22.33 GW is being implemented and tenders for a further 31.99 GW have been issued by May 31, according to the latest data provided by the Council On Energy, Environment And Water (CEEW), a Delhi-based think-tank.

The COVID-19 pandemic has already impacted India’s renewables installation, and the border standoff with China--which provides 80% of India’s solar equipment needs--has further multiplied the sector’s problems. Here are some of the short-term and long-term challenges that India needs to address to keep its energy transition smooth.

Following border hostilities, India is considering a 20% customs duty on solar cells and modules imported from China. With the 2022 target nearing, this could result in a setback for India's renewables developers, said experts.

Cheap imports from China had pushed India’s renewable energy boom. India’s annual domestic solar module manufacturing capacity is at about 3 GW, or 15% of the country’s requirement of 20 GW. “Many of these [domestic solar] manufacturing facilities may have obsolete manufacturing equipment and will not be able to supply large-scale projects,” Rishabh Jain, manager, market intelligence, Centre for Energy Finance at CEEW, told IndiaSpend.

This is not the first time India has imposed an additional tariff on imports. In 2018, it added a two-year 25% safeguard duty on solar parts coming from China and Malaysia to kickstart domestic solar manufacturing that had not kept up with the country’s energy transition targets, IndiaSpend reported in July 2018. The duty is set to end in July 2020.

Following the imposition of safeguard duties, India’s pace of annual new capacity addition slowed. The solar capacity addition in 2016-17 was nearly 16 GW. In 2017-18, it declined 20% and in 2018-19 a further 13%, Vibhuti Garg, energy economist at Institute for Energy Economics and Financial Analysis, told IndiaSpend.

The safeguard duty--which India is considering reinstating for another four years--failed to increase domestic manufacturing capacity mostly because several large projects were already under way when it was introduced and these were exempted, said Garg. “Given that the safeguard duty was for only two years, it did not give manufacturers enough confidence to take long-term decisions,” Garg added.

Jain of CEEW agreed that the “timeline was very small” to instil confidence in investors to set-up new manufacturing capacity. And imports from China and Malaysia were replaced by purchases from other countries. “In addition, the exports from exempt countries like Vietnam and Thailand increased, negating the potential impact of safeguard duty on domestic manufacturing,” Jain added. 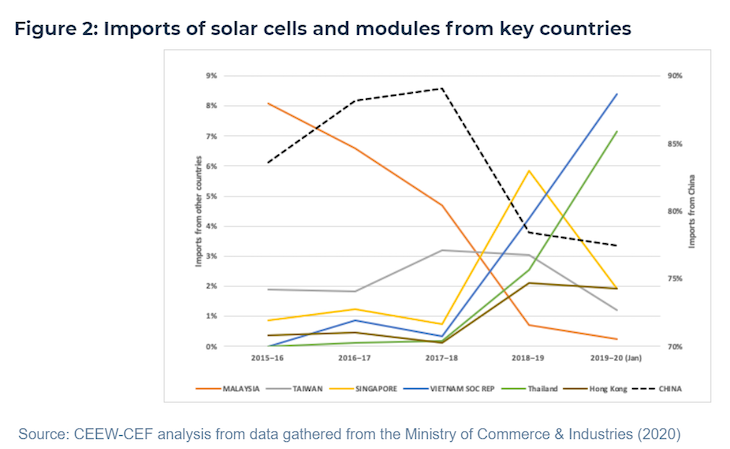 Will these duties help the domestic renewables industry? Experts said they are hopeful.

Customs duty might give developers long-term certainty and incentivise them to undertake more domestic manufacturing, said Garg, adding that in the short term, the prices of solar modules might go up. “However, with economies of scale and technology innovation, prices will go down in future,” she said.

Indian solar modules are about 22%-33% costlier than their Chinese versions, CEEW data show. The difference tends to fall with increased capacity utilisation of domestic manufacturing facilities, said Jain. “Hence, a duty in the range of the cost differential can be the first step to increasing competitiveness between domestic and imported products,” Jain said. Implementing duties might also increase the low tariff rates of solar energy but this would only create short-term disruptions, with minimal long-term impact, he added.

To avoid confusion and delay in installations, the government must provide a clear timeline of duties so that developers do not postpone their procurement, which happened in the case of safeguard duties, said Jain. The safeguard duties started from 25% and reduced periodically in the implementation period. To save themselves from increased costs, “developers postponed procurement to months with low duty”, said Jain.

However, duties must be accompanied by policy and demand certainty to attract fresh investment to scale up domestic manufacturing of solar parts, said Jain. The government needs to devise and implement additional measures such as preferential treatment through assured off-take of manufactured solar parts, stable and long-term policies and focus on high-efficiency products, he said.

Another solution could be that the “government should promote domestic manufacturing by providing tax incentives like tax holidays for such [solar parts manufacturing] industries for the next 10 years”, said Garg.

The producers, however, are not very optimistic about the import duties. Most (58%) of the CEOs interviewed for ‘Bridge to India’ for their June 2020 report are not in favour of an import duty on modules and cells. Further, 45% of them also believed that import duties would not help the domestic manufacturing sector.

In India, the finance available for renewables is costly: At 9-11%, the average cost of debt for renewable energy projects is among the highest in Asia. These rates threaten the viability of existing large scale grid-connected clean energy projects, showed a 2018 report by Natural Resources Defence Council (NRDC), a global think-tank.

Large-scale project developers take on loans on which the interest is variable (it mostly rises) but their revenue from the projects is from long-term power purchase agreements, where the tariff is usually fixed, the NRDC report explained. “These loans get riskier if rates rise, and some may turn into “stressed” assets for banks, deterring further lending to the sector,” it added.

To ease the availability of finance, India’s leading financial institution dedicated to clean energy expansion, the Indian Renewable Energy Development Agency (IREDA), the government’s main RE financer, is looking to set-up a ‘Green Window’, to specifically finance environment-friendly projects in India. To create enough financial resources for renewable projects, IREDA plans to encourage public and private, national and international financial institutions to pool their investments by reducing the risk of investing in the sector.

Although there are uncertainties and risks in green energy projects that keep the interest rates high, these can be balanced with the green window, Bhanu Pratap Yadav, joint secretary, Union Ministry of New & Renewable Energy (MNRE), said in response to a question by IndiaSpend at an online conference on July 7.

Financial institutions, companies and investors that want to invest in the green sector will get a push with this initiative, Yadav added.

Another challenge for renewables in India is electricity transmission infrastructure and its ability to handle the influx of new intermittent renewable power generation.

To address the lack of grid infrastructure, the government had announced the setting up of over 9,400 ckm [circuit kilometre] of intra-state transmission lines by March 2020 under the country’s Green Energy Corridor plan. This would strengthen India’s transmission systems to evacuate and accommodate increasing generation of renewable energy.

The plan, however, is running behind schedule, and a March 2018 report of a standing committee of the Lok Sabha, the lower house of parliament, questioned the attainability of the March 2020 target. As per the latest available government data, India had added 6,258 ckm of transmission lines by the end of December 2019.

“The March 2020 deadline for over 9,000 ckm of transmission lines has been extended by a year till March 2021. This decision came in January this year,” a senior officer at the MNRE told IndiaSpend.

Nearly 200 ckm transmission lines were added after December 2019, before the entire operation was hit by COVID-19 in March, the officer said, adding that there has barely been any progress since.

Difficulties in acquiring land are a common bottleneck for clean power plants and grid projects, said the BNEF report we mentioned above.

About 70% of the CEOs interviewed by Bridge to India for their June 2020 report rated the availability of land for projects as “challenging” to “extremely challenging”.

The BNEF report said that to resolve the land issue, better coordination is needed among all the stakeholders. “Simplifying land acquisition procedures and digitising land records would remove a bottleneck affecting the sector today,” it said.

Most state-owned electricity distribution companies (discoms) are financially stressed as modest tariff hikes do not cover the rising cost of supply: Poor metering and bill collection efficiency leads to high technical and commercial losses, IndiaSpend reported on May 21.

As a result of mounting losses, discoms defer payments to power producers, creating a series of delays through the value chain, said the BNEF report. At the end of May 2020, the discoms’ dues to renewables’ generators stood at Rs 9,725 crore ($1.3 billion), as per the latest government data.

“This dents investor confidence because of the threat to their project returns, and may dampen future investments,” the BNEF report said. For this to improve, the financial health and resiliency of discoms will need to be improved, the report added.

State-run discoms in the country suffered combined losses of Rs 61,360 crore ($8.17 billion) in 2018-19, numerically even higher than the losses recorded in 2014-15--which compelled the government to launch a bailout and reform programme, the Ujwal DISCOM Assurance Yojana.