Doubling Time Not The Only Metric, Other Data Must To Make Post-LockDown Decisions, Experts Say

Jaipur: As India plans to relax the countrywide lockdown after May 3, 2020, the government should not rely only on the rising doubling time of COVID-19 cases to infer the spread and progression of the disease, but should ramp up testing, especially in densely populated areas. Patients and their contacts should be detected early and isolated or quarantined, and the government should share data more transparently, experts have told IndiaSpend.

The health ministry, in its press briefings (here and here) has emphasised how India’s doubling time of COVID-19 cases has been increasing since the lockdown. This has been used as an indicator of the success of India’s fight against the pandemic, with the Ministry of Home Affairs suggesting that areas that have a COVID-19 doubling time greater than four days--among other indicators--can think of relaxing the lockdown partially.

“There is no way to say what the doubling time should be to end a lockdown,” said Delhi-based Shahid Jameel, a virologist and the chief executive officer of India Alliance, a charity that funds biomedical research. “Of course if you lock down people in houses, the virus will have fewer chances to move from an infected to a non-infected person,” said Jameel. The lockdown needs to be lifted, at least partially, because it has caused so much suffering, starvation and even deaths, and not because of some doubling time, added Jameel.

India has still not reached the peak

The doubling time is the number of days it would take cases to double, based on the rate of increase in cases. The current doubling time in India is 12.4 days, up from 4.8 days on March 24, 2020, the day Prime Minister Narendra Modi announced the national lockdown, our calculations, based on a three-day moving average of total cases, show. The Indian Council of Medical Research (ICMR) uses the same metric. (A moving average is used to smoothen unnatural spikes in the data over consecutive days, which might not be because of an actual difference in cases but because of the number of samples tested or the results of testing on a particular day.)

The increase in the doubling time is an “indication that the lockdown is working, we are seeing a flattening off”, said Gautam Menon, a professor of physics and biology at Ashoka University in Haryana. He added that cases considered for all of India are growing linearly; that is, cases are not increasing at a higher rate over time, as they would have in case of exponential growth.

“But there is still an increase in cases which might be because of a lack of testing,” he said. “If we had truly been in control, we would have seen a saturation and a bending curve. We are not seeing that. It still doesn’t seem to have reached the peak,” he added. This means that the growth in COVID-19 cases is not decreasing day by day, as should happen if the disease were under control.

If the current doubling time (12.4 days) would persist, India could potentially have over 65 million cases by September 12, 2020. 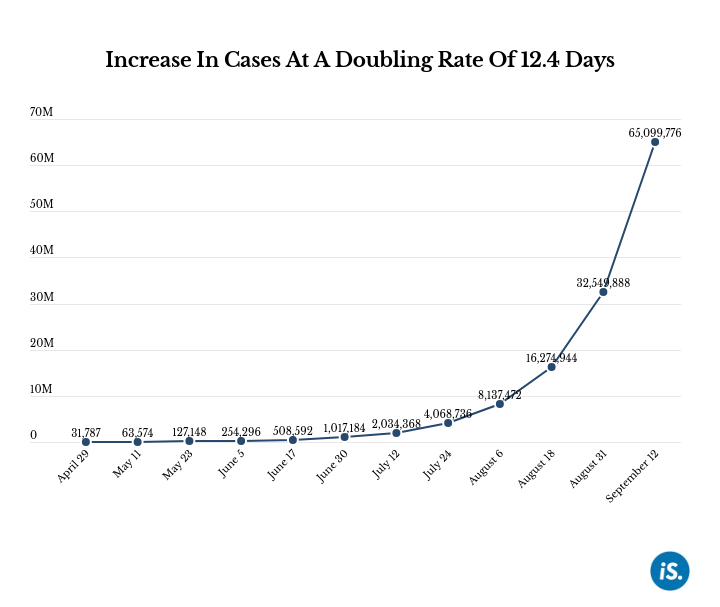 Menon suggested that a moving average of between four and six days is a better indicator to calculate the doubling time.

In case of using a five-day moving average to calculate the doubling time, the latest doubling time would be 11.8 days, down from 4.4 on March 24, 2020. At this rate, India could potentially have 65 million cases by September 5.

In the graph below, Aatish Bhatia, former associate director of engineering education at Princeton University's Council on Science and Technology, has plotted the total number of new infections in the past week versus the total number of infections up to that day. If the country had the disease in control and cases were not roughly moving along the exponential growth curve, we could see it on the graph. See, for instance, how South Korea “falls” off the graph versus India.

At the same time, India is doing better than the United States was when its cases were increasing exponentially, mostly on a straight path. The US curve now appears to be flattening.

There are state-level variations in the growth of COVID-19 cases. “This is not like India painted in one colour. Each state is at a different stage in disease progression,” Giridhar R Babu, professor of life course epidemiology at the Public Health Foundation of India, told Databaaz.

The trajectory of COVID-19 cases for states that have more than 150 cases has been plotted on graphs by researchers from the Indian Statistical Institute.

As the number of cases change daily, these numbers are more of a sign of the trend currently rather than a projection of what might happen in the future. Based on the limited data available, COVID-19 cases in Maharashtra, Bihar, Uttar Pradesh, Gujarat and West Bengal are still growing exponentially. The growth of cases in Madhya Pradesh and Delhi has reduced but they are still growing fast and could be back to exponential growth. Andhra Pradesh appears to be on the way to flattening the curve if the rate of new cases keeps decreasing. 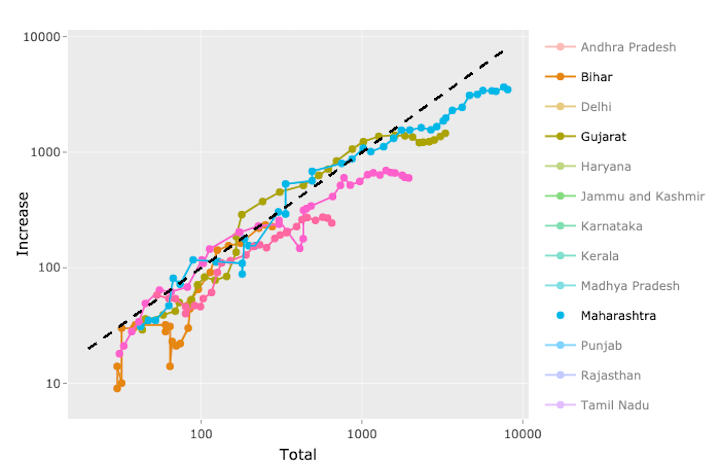 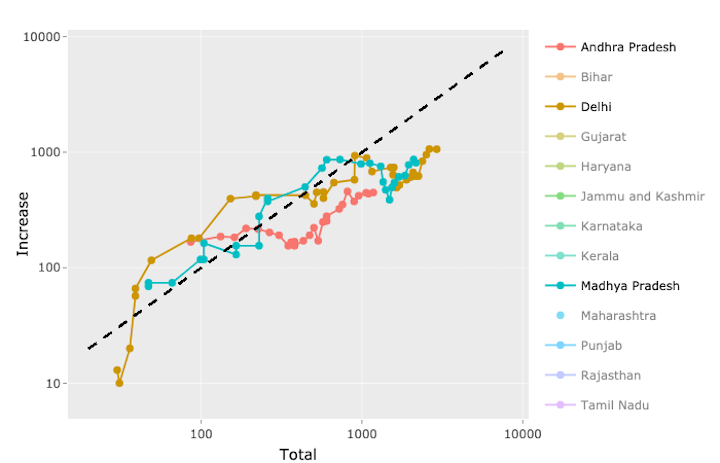 The growth of cases in Rajasthan was exponential but the curve seems to be flattening now.

Kerala, which no longer has exponential growth, has detected some new cases that reduced its doubling time from 66 days around April 15 to 36.7 currently. In comparison, the doubling time in Kerala was 3.3 days on March 24, 2020.

Karnataka and Tamil Nadu have flattened the curve, as have Haryana and Telangana and both are now falling off the exponential growth curve. 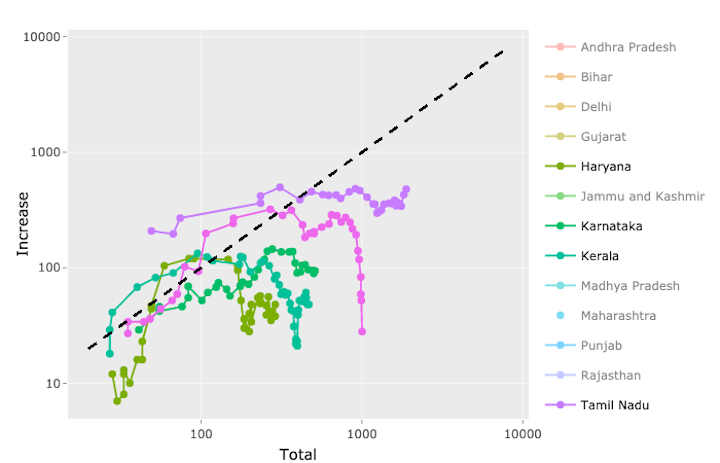 Punjab has a lot of variation in the growth of cases and no clear trend.

Jammu and Kashmir seemed to be falling off the exponential growth curve, with its doubling time up to 18 days on April 20, but a new wave of confirmed cases have brought the doubling time down to 14.6 on April 30, 2020.

Currently, different states are following different testing strategies, but “we are still not testing the general population”, said Jameel. The data are not representative because India is testing only a selected group of people.

India should ramp up testing, especially in high-density areas such as Dharavi, to understand the spread of the disease and the extent of asymptomatic carriers, Menon said.

Further, an increase in cases might not mean that the disease is actually spreading but that those cases have only been identified now. Those cases that were identified late could have unknowingly spread the disease to more people.

For instance, in Delhi, the government is even testing asymptomatic high-risk contacts of confirmed COVID-19 patients, according to an official involved in managing testing, but in Mumbai, testing is mostly restricted to those who show symptoms. Such a testing criteria could be missing many of those who have mild or no symptoms--which are 80% of all COVID-19 patients, according to the World Health Organization (WHO).

“On 23rd March, we had conducted 14,915 tests. On 22nd April, we have done more than 500,000 tests,” an increase of 33 times in 30 days, said C.K. Mishra, secretary of the environment ministry and chairperson of one of the empowered groups working on the COVID-19 response, at a press conference on April 23. He said the testing strategy was “focused, targeted and continues to expand.” “We are conscious of the fact that this is not enough, we will continue to ramp up testing in the country,” he had said.

If the doubling time in a state is high, it does not mean that it will remain high. Take, for instance, Bihar. From April 4 to April 20, the COVID-19 doubling time in the state fluctuated from as high as 22 days to as low as four days. This could have been because of low testing or contact tracing, or because of the movement of migrants. In any case, a decision based solely on doubling time would not have been accurate. This is important, especially as India will relax the lockdown from May 4. Currently, the doubling time of COVID-19 in Bihar is 5.5 days.

As India relaxes the lockdown, it must continue to test and identify cases and isolate them early to limit the spread of the disease, experts told IndiaSpend.

“There is no option but to have a lockdown in hotspots. We should try and localise the lockdown as much as possible--to a ward or even smaller if possible. In the long run it’s hard to maintain a countrywide lockdown,” said Menon.

To make sure India does not lose the gains made so far, “surveillance is the only way forward. Detect cases, isolate them, pick up the contacts, quarantine them, apart from all the other measures of physical distancing,” Babu told Databaaz.