Goa first to be COVID-19 free, for now

As India begins to lift restrictions in non-containment zones, the tourist destination of Goa has become the first state to report zero active cases and enter the green zone. Nagaland is the other state that has no more active cases after its only case was transferred to Assam.

Goa had reported its first three patients on March 27, and its latest one on April 4, taking its total to seven. Six patients had a travel history and one a primary contact.

On April 10, it reported its first recovery when one COVID-19 patient was discharged. Four more were discharged on April 12, one more on April 17 and the last on April 20, per health ministry data. 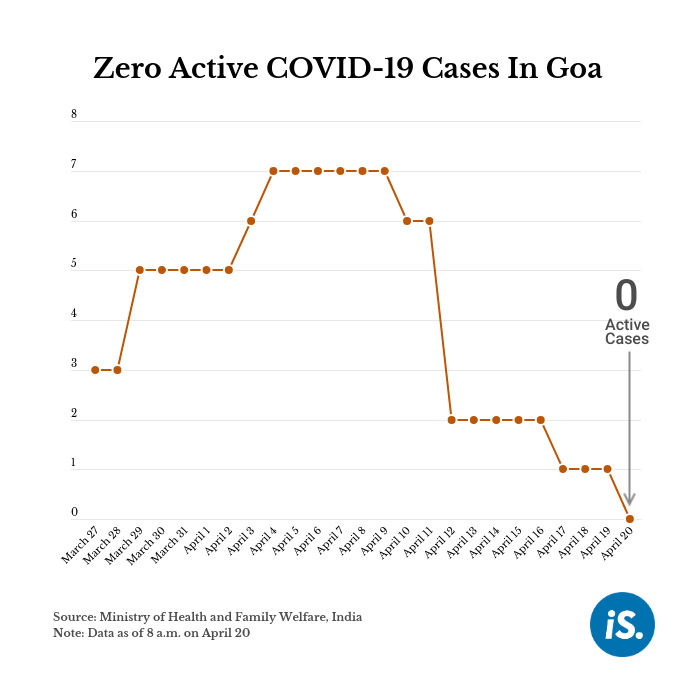 As part of its response, the Goa administration screened domestic airline passengers, trained its team of microbiologists in sample testing, and purchased adequate PPE kits in time, The Print reported on April 19.

Its lockdown, however, will continue until May 3, Chief Minister Promod Sawant said.

'Grocery On Wheels' - an initiative by the Goa Government to ensure a smooth supply of essentials for its citizens amidst the lockdown. #IndiaFightsCorona #SupplyWarriors@PMOIndia @NITIAayog @COVIDNewsByMIB @MIB_India @goacm pic.twitter.com/bhdHCNyVqe

“A moment of satisfaction and relief for Goa as the last active Covid-19 case tests negative. Team of Doctors and entire support staff deserves applause for their relentless effort. No new positive case in Goa after 3rd April 2020,” Sawant tweeted.

As on April 20, there are seven states and UTs that have fewer than 10 active cases (excluding Goa and Nagaland). Four northeastern states--Arunachal Pradesh, Manipur, Mizoram, Tripura-- have one active case each.

Sikkim and the union territories of Dadra and Nagar Haveli and Daman and Diu, and Lakshadweep have not reported any cases.

(Paliath is an analyst with IndiaSpend. Visuals by Jameela Ahmed, an IndiaSpend contributor.)