As Nearby States Report 350 Stubble Fires In 7 Days, Delhi Prepares To Deal With Bad Air

New Delhi: About 350 incidents of stubble burning have been recorded in Punjab, Haryana and Uttar Pradesh over seven days to September 26, 2019, forcing officials in these states and the adjoining national capital region of Delhi to take emergency actions.

Air quality plummets every year at the onset of the winter in northern India, and stubble burning in the farm states of Punjab, Haryana and western Uttar Pradesh is estimated to account for 20-30% of Delhi’s fine particulate pollution (PM 2.5).

The ‘Odd-Even’ rule (that allows odd- and even-numbered vehicles on the road on alternate days) will come into force from November 4, 2019, for about two weeks. Delhi government is also considering staggered office hours to reduce traffic congestion.

Meanwhile, the Punjab government has asked the Centre for financial help to offer farmers an incentive of Rs 100 per quintal for not burning crop residue.

Due to the short window between the harvesting of paddy and the sowing of wheat, farmers clear their fields for sowing by setting fire to the leftover post-harvest paddy straw.

This process of stubble burning in the farm states of Punjab, Haryana and western Uttar Pradesh accounts for 20-30% of Delhi’s fine particulate pollution (PM 2.5), according to two separate estimates--a 2016 study from the Indian Institute of Technology, Kanpur (IIT Kanpur); and a 2018 study by a Delhi-based think-tank, The Energy and Resources Institute (TERI).

PM 2.5 is a pollutant about 30 times finer than a human hair. It can be inhaled deep into the lungs, and can cause heart attacks, strokes, lung cancer and respiratory diseases. The extent of PM 2.5 pollution is considered the best indicator of health risks from air pollution, according to the World Health Organization.

The current stubble-burning incidents will not have much effect on Delhi’s air due to climatic conditions, Kuldeep Shrivastava, senior scientist at the India Meteorology Department (IMD) in Delhi, told IndiaSpend. The situation will change in the second half of October.

“Due to heavy Easterly winds entering Delhi from Central Uttar Pradesh region and moving towards Punjab and Haryana, all the pollutants from current stubble burning are being pushed into the Pakistan side,” Shrivastava said, adding that for the next 10-15 days stubble burning will not have much effect on Delhi’s air.

“But towards the end of October, wind patterns change into north-westerly, meaning air enters Delhi from Punjab and Haryana, carrying the pollution of stubble burning,” Shrivastava said, “And because at this time of the year winds are lighter and there is no rainfall activity, the pollution does not disperse.”

The recent fire incidents have been spotted in Amritsar and Tarn Taran districts of Punjab which predominantly grow early basmati varieties (varieties that are harvested earlier than the common type), as per a tweet by the Council on Energy, Environment and Water (CEEW), a Delhi-based think tank, on September 26, 2019.

The most number of fire counts in a day, about 99, were spotted on September 24, 2019. CEEW has been tracking the fires through satellite imagery. 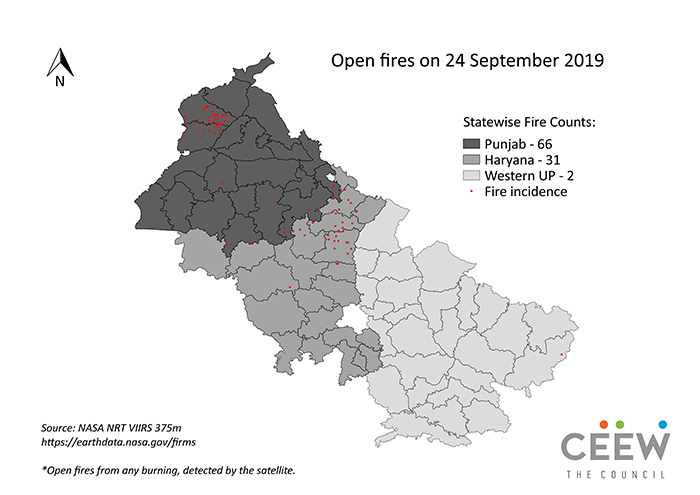 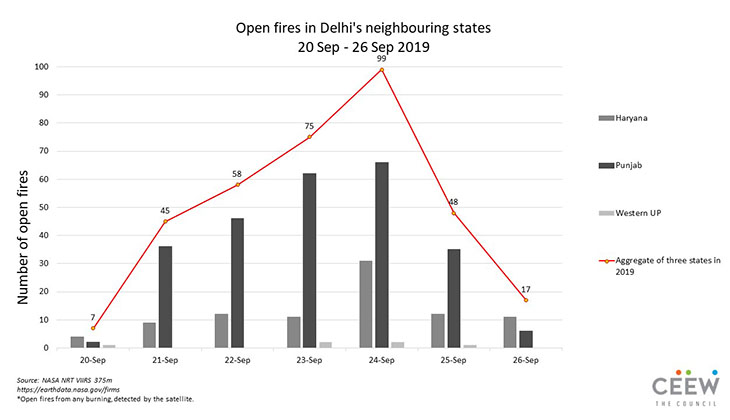 Usually the activity of stubble burning picks up in October and goes on until November. During these two months in 2018, Punjab alone recorded more than 50,000 stubble-burning cases, according to this March 2019 study by CEEW.

Stubble Burning In Punjab During Oct-Nov

In 2018, there were more than 108,000 stubble burning incidents in Haryana, Punjab and Uttar Pradesh. This was a 47% decline compared to 2016, The Print reported on September 9, 2019, using data from different sources. These states burn about 20 million tonnes of paddy straw in October and November each year--about 2 million truckloads of paddy straw at 10 tonnes per truck.

The governments of Punjab, Haryana and Uttar Pradesh, in coordination with the central government and the Indian Council of Agriculture Research (ICAR), have been trying to reduce the number of such cases by 70% in 2019.

Measures include: Promotion of Super Straw Management System (Super SMS), an attachment compatible with any combine harvester which ensures that straws are cut and spread evenly on the field; promotion of a machine called Happy Seeder which helps in sowing wheat crop without the need of moving the straw spread by SMS; establishment of custom hiring centres (CHC) from where farmers can rent such machines.

Under a centrally sponsored 2018 scheme, the ‘Agricultural Mechanisation for in-situ Management of Crop Residues’, the central government has approved a budget of Rs 1,151.80 crore for 2018-19 and 2019-20 for the promotion of Super SMS and Happy Seeder in Haryana, Punjab and Uttar Pradesh, according to this August 2019 government release.

Under the scheme, individual buyers get 50% subsidy and farmers' cooperatives, self-help groups, registered societies and other entrepreneurs looking to set up a CHC get 80% subsidy.

However, CEEW’s 2019 study noted, even after the scheme farmers continued to burn residue in the wheat harvest season in 2018, just as they seem to be doing again at paddy harvest time now.

However, Trilochan Mohapatra, director general of ICAR, is optimistic that the number of crop burning cases will fall substantially this year.

“This year Haryana is likely to be free from stubble burning. But Punjab and Uttar Pradesh will not be completely free. There has been vast improvement after our intervention,” Mohapatra told The Economic Times in an August 2019 interview. “Chief secretaries and secretaries of concerned departments along with ICAR officials review the situation every month and take corrective action. The pollution index will improve substantially this time,” he added.

After studying the ground realities and how the farmers are reacting to the mechanisation scheme, the CEEW study makes the following suggestions:

Make paddy residue management technologies available with fixed rentals: The Happy Seeder technology coupled with Super SMS-mounted combine harvesters are an innovative and potentially scalable solution to manage paddy residue. To widen use, a careful assessment is needed of farm-level constraints to scaling up, of trade-offs, and of viable business models. However, it is important to fix a uniform rental rate to improve the efficiency of usage and even pricing; app-based rental models could be promoted.

Promote short-duration rice varieties: Punjab Agricultural University has developed early-maturing varieties of rice, such as PR 126 and PR 127. The PR 126 matures in about 123-125 days after seeding and PR 127 in about 137 days. Both the varieties yield around 30 quintals per acre and consume less water than late maturing PUSA varieties that require more water and also leave heavier stubble. A shift to early-maturing rice varieties will allow farmers more time for clearing and preparing fields for sowing wheat. These varieties have a higher yield, consume less water, and resist diseases better; therefore, they can prove more profitable.

Raise farmer awareness: Misperceptions of practices or of cost of alternative technologies of residue removal and other in situ practices seriously constrain uptake. Better residue management practices need to be demonstrated through more, better awareness campaigns and design information tools.

Give farmers incentives to move away from the rice-wheat cultivation cycle: In the long term, Punjab needs to shift away from rice-wheat rotation. Current price signals and marketing and procurement policies of crops other than paddy do not offer farmers at-par incentives to shift away from paddy cultivation. Even if MSPs are announced (for pulses, for example), procurement is still an issue. In choosing between the labour and mechanisation options of managing straw, farmers prefer cash incentives to subsidies.

Set up mechanisms to collect paddy residue: Enterprises such as paper plants can recycle paddy residue; but, to run economically, a plant needs residue from 60-70 acres of land daily, along with six months of storage infrastructure. Currently, there is no uniform mechanism to collect, store, or transport paddy residue; since supply is not assured, industry lacks an incentive to invest in additional plants. Assigning economic value to the residue and recycling it should incentivise the building of this mechanism.