New Delhi: The Delhi police are India’s best in terms of staffing, infrastructure and use of budget, followed by Kerala and Maharashtra, a new study has revealed. Uttar Pradesh, Chhattisgarh and Bihar are the worst and most overworked among the 22 states analysed.

These findings are based on a Police Adequacy Index, derived from national data, part of the ‘Status of Policing in India Report 2019’, released on August 27, 2019 by Common Cause and Lokniti–Centre for the Study Developing Societies, a nonprofit and a think tank, respectively, based in New Delhi.

The study of 11,000 personnel in 22 states used available government data to analyse and rank the performance of state police on parameters of staffing, infrastructure and budget. Researchers also interviewed 11,834 police personnel across 105 locations in 21 states between February and April 2019. The survey covered the personnel’s opinions over adequacy of police infrastructure, their duties and their perception over several types of crimes and different sections of the society. You can IndiaSpend’s full coverage of the study, here and here.

To derive indices, researchers used data from the Bureau of Police Research and Development and the National Crime Records Bureau for the following parameters:

Overall, as of 2016, Indian police forces were working at 77.4% of their sanctioned capacity, the study said, leading to personnel being overworked.

While 41% personnel think women lack the “physical strength and aggressive behaviour” required for the job, 32% think “women police are incapable of handling high intensity crimes and cases”, and 51% think that, due to “inflexible working hours, it is not alright for women to work in the police force as they cannot attend to homely duties”, as IndiaSpend reported on August 29, 2019.

Further, 267 police stations across India had no telephones and 129 had no wireless communication devices as of January 2017, as IndiaSpend reported on August 24, 2019, citing the latest available data from the Bureau of Police Research and Development (BPRD). There were eight vehicles for every 100 police personnel for responding to distress calls, patrolling and maintaining law and order in their jurisdictions.

Across the 22 states analysed in the study, police stations had, on average, six computers each. Delhi had the highest (16.5 computers per police station) and Bihar had the lowest (0.6).

The utilisation of police forces’ modernisation budget was less than half (48%) of the funding available, according to an IndiaSpend analysis (cited above) of government data.

Delhi police performs well on both infrastructure (1.03) and strength (0.70) parameters.

“Gujarat and Andhra Pradesh, despite using comparatively marginal proportion of the allocated budget, boast of a better infrastructure than many other states. Yet, both States land in the absolute bottom of ranking,” the study said.

Uttarakhand is the exact contrary to these two States, the study pointed out. The state uses much lesser proportion of the allocated budget but boasts better infrastructure and better proportionate strength and hence a better overall ranking.

These inadequacies affect the working conditions of police personnel, with many of them being overworked, as the survey’s findings show: 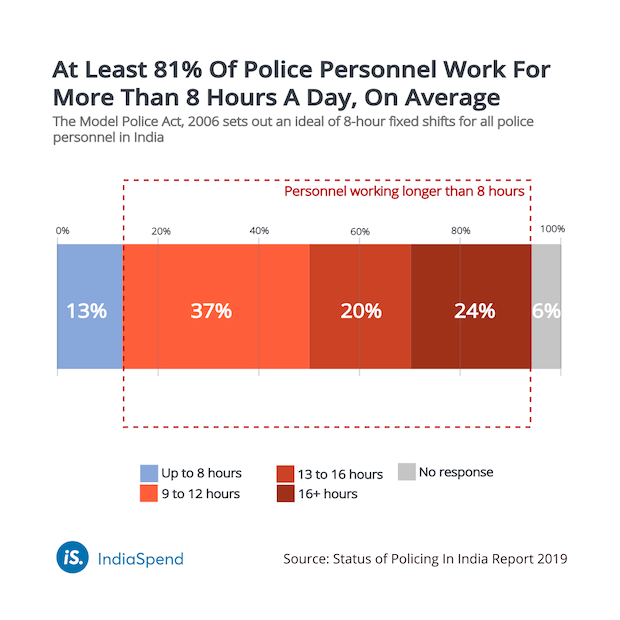 About 28% police personnel believe that “pressure from politicians” is the “biggest hindrance” in crime investigations, found the survey. 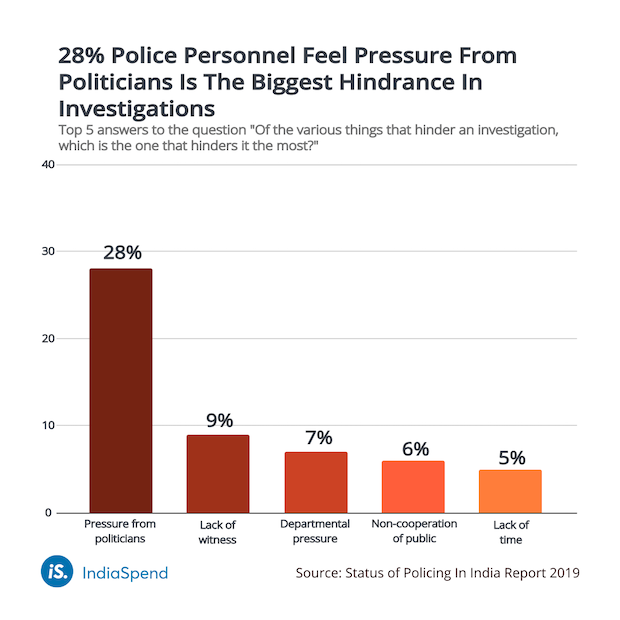 When asked about the frequency of such pressure, one in three personnel reported facing such pressure “many times” in the course of a crime investigation. A similar percentage reported that unwilling witnesses were a hindrance “many times”.

The question posed was: “Considering the past 2-3 years of your work experience, how often have you encountered political pressure during investigation of a crime?” They were asked to choose one of these responses: many times, sometimes, rarely or never.

Three out of five police personnel surveyed reported transfer as the most common consequence of not complying with external pressures, the study said.