Bengaluru: On June 18, 2020, the Karnataka High Court stayed the state wildlife board’s clearance for the laying of the 168-km Hubballi-Ankola railway line that required the cutting of more than 157,000 trees. The board had okayed the project in March 2020 despite the objections of most of its senior members.

Since its inception in 1997-98, the rail link had been repeatedly rejected for its environmental impact on the fragile ecology of the Western Ghats, according to the petition filed in the matter by the Project Vruksha Foundation. If built, this line would cut through the Bedthi Conservation Reserve, the Hornbill Conservation Reserve and the buffer zone of the Kali Tiger Reserve, the petition said. It would also end up creating a barrier between the Kali and the Bhadra tiger reserves, disrupting a migration corridor for wildlife.

Most of the proposed railway line passes through dense forest lands, as per a site inspection report submitted to the Ministry of Environment, Forest and Climate Change (MoEFCC). The total land required is 995.64 hectares, including 595.64 hectares of forest land, 184.6 hectares of wetland, and 190 hectares of dry land, according to a project document.

The Uttara Kannada landscape supports a wide variety of birds, flowering plants, insects, mammals, zooplanktons and reptiles. The stretch of the proposed railway line spreading across the Dharwad-Yellapur-Karwar forest division is known to host more than 29 species of mammals, 256 varieties of birds, eight species of reptiles and 50 species of butterflies, researchers from the Indian Institute of Science (IISc) had stated in a 2012 report to the state government. An extinct frog species had been rediscovered on the stretch, the report had said.

A section of the ghats is also home to the over 50 Myristica swamps, an ancient evergreen forest system. These forests also support tribal communities such as the Lambanis, Gawlis, Medars and Siddis.

Large-scale development activities have led to high levels of degradation in the forests of Uttara Kannada district where most of this rail link will be situated: Forest cover here fell from 74.19% of the land area in 1973 to 48.04% in 2018, according to a May 2020 study by researchers from the IISc and the Indian Institute of Technology, Kharagpur. 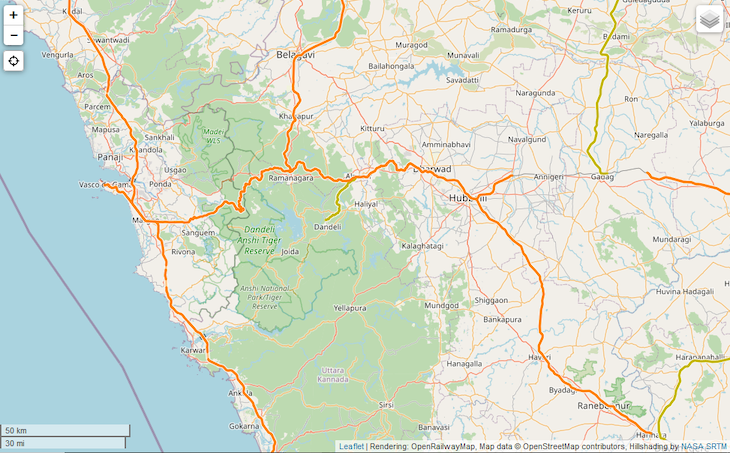 Over 9,628 hectares of the district’s forest lands have been given away for various works in the past 30 years and 62,814.48 hectares since 1956--the Kadra hydroelectric project at 3,051 hectares and Project Seabird at 2,259 hectares are two examples. There is an additional proposal for the expansion of the Kaiga power plant which will require around 50 hectares of forest land and also the ongoing doubling of the existing rail track between Hubballi and Vasco in Goa. 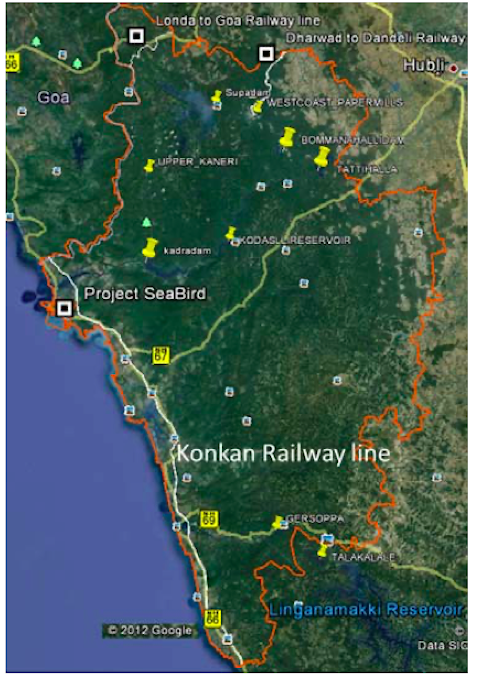 Numerous railway lines crisscross the Western Ghats from north to south Maharashtra. The Mumbai-Nagpur route cuts through it at Igatpuri creating an artificial barrier for the region’s ecology. Elsewhere, the ghats in Karnataka and Kerala are dissected by multiple lines--Kozhikode-Chennai, Mangaluru-Bengaluru and Mumbai-Pune for example.

Since 2014, the National Board for Wildlife has given clearances to over 500 projects inside protected areas and eco-sensitive zones, as IndiaSpend reported in July 2019. Thirteen railway projects have been exempted from seeking forest clearance, our report said. Here are some of them: Doubling of the Katni-Singrauli railway line, 33 km of which will pass through the Sanjay National Park and act as a barrier to its critical corridor to Bandhavgarh; the 175-km Akola-Khandwa gauge conversion project, 18 km of which will cut through Melghat’s tiger habitat that also houses the critically endangered forest owlet; the Lucknow-Pilibhit gauge conversion project inside the Pilibhit Tiger Reserve and the doubling of the Hospet-Vasco line that will pass through the evergreen forests of Karnataka and Goa.

Another project seeks to connect Sivok railway station in Darjeeling district in West Bengal to Rangpo in East Sikkim using a network of tunnels and bridges. This area lies in a seismic zone IV, with fragile slopes that are threatened by constructions, said experts. The Palamau rail track network is witnessing an addition of one more railway line to the existing network of two lines, making it difficult for animals to cross.

In the immediate neighbourhood of the proposed Hubballi-Ankola project, on lines connecting Dharward to Goa and Belagavi via Londa, 15 gaurs, two elephants, a sloth bear and many other herbivores and reptiles have been reportedly mowed down by speeding trains. The proposed project will fragment an old migration path of elephants, putting their lives at risk, the IISc’s report cited above said.

The Hubballi-Ankola line was conceived in 1998, the petition noted, and protests against it began almost immediately.

When the dispute reached the Supreme Court, it referred it to its Central Empowered Committee (CEC) which submitted its report in August 2015. The Supreme Court panel concluded that the project’s “huge and irreparable” ecological impact would “far outweigh” its “actual tangible benefits”. The net present value--a one-time payment for diverting forestland for non-forest use--of the modified requirement of 727 hectares of forest land works out to Rs 7,426 crore, over triple the initial project cost of Rs 2,315 crore, the CEC’s report noted.

In October 2015, South Western Railway again indicated its wish to start the project but did not move ahead.

The disputed railway line was essential for ensuring rail connectivity to the new major port of Belekeri, said Union Minister for Road Transport, Highways and Shipping Nitin Gadkari in March 2016 while laying the foundation stone for an infrastructure project in Hubballi. The National Board of Wildlife deferred the proposal as per the discussion of the 50th meeting of the Standing Committee held on September 7, 2018, for want of the site inspection report. Given the hurdles to securing clearances, the railway minister was finding it impossible to start the project, the then chief minister of Karnataka H.D. Kumaraswamy stated in December 2018.

However, in the Union Interim Budget of 2019-2020, Rs 255 crore was sanctioned for the Hubballi-Ankola project among allocations for various ongoing rail projects. The process continued till the approval was granted in the 14th board meeting of the State Board for Wildlife on March 20. The following timeline sums up the chronology. 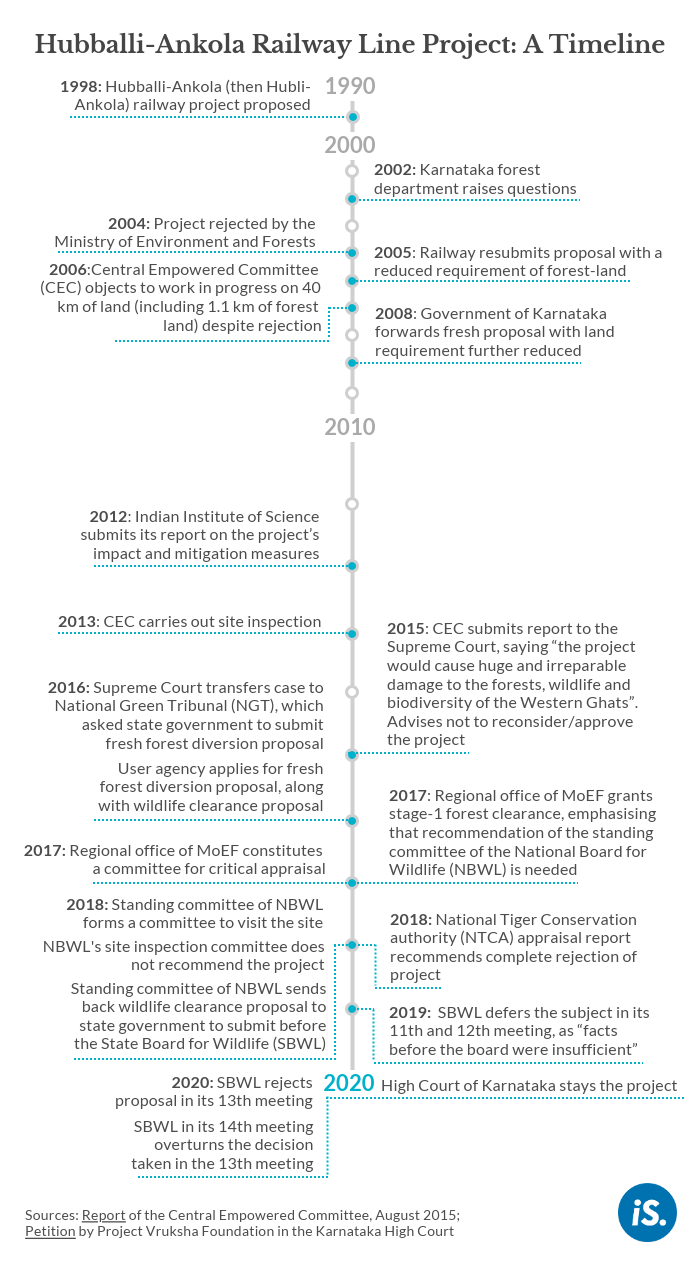 Much of India’s western coast is already well-connected and the four-laning of the coastal highway, the NH-66, from the Goa border (near Karwar) to the Kerala border (near Talapady) is under way. This project can further accommodate six lanes in the future. The upgraded highway allows the easy use of the rapidly developing Mumbai-Mangaluru transport hub.

Links also exist between the west coast and the hinterland that facilitate the development of northern Karnataka--there is an existing railway track, merely 65 km longer and substantially underutilised, the petition said, that connects Hubballi to Madgaon and further to Karwar junction and Ankola. Additionally, a road network connects Hubballi to Ankola via NH 63 and has been used for iron ore transportation for years.

There also exist several minor roads such as the SH-69 to Kumta, which has been used by local residents without any disruption to their lives. With the proposed project, the state hopes to transport iron ore and other minerals to the upcoming port at Tadri near Ankola and further to ports such as Karwar, Madgaon and Vasco. But existing networks remain underutilised, pointed out experts.

Some of the people’s movements against projects that affect local environments have succeeded. For example, the Coimbatore-Chamrajnagar rail line went through several years of revival and rejection until 1996, when it was finally approved. However, further protests led to its scrapping.

Uttara Kannada has lost a lot of its forest cover to big dams, and nuclear and power plants, said Pandurang Hegde of Parisara Samrakshana Kendra, a Sirsi-based environment group, and the founder of the Appiko movement to protect the tropical forests of the Western Ghats. “Now whatever remains is very little and this rail line will destroy the most majestic natural forest in the Kali and Bedthi valley,” he said. “Leave alone the issue of biodiversity and other losses, we simply can not create such natural beauty, it has its own intrinsic value, which is beyond financial calculations.”

“There exist alternatives, both rail and road lines. We are going to relaunch Appiko if the government starts felling trees for this project; preparations are already on and we are geared for a long-term grassroots action,” said Hegde.