As Lockdown Ends, Infectivity Has Fallen But Cases Continue To Grow Exponentially

The effective reproductive number (R) of COVID-19 cases in India had fallen to 1.22 by June 4, but cases were continuing to rise exponentially as the country started to reopen, increasing 45% from 190,535 on June 1 to 276,583 on June 10, 2020. With an R greater than one, the epidemic could flare up again as public spaces including malls, temples and restaurants reopen, experts warn. They suggest staggered work-days and hours and intermittent lockdowns to slow the spread of the virus while enabling economic activity.

India’s basic reproductive number, R0, the number of people each patient infects in a completely susceptible population with no policy measures or natural immunity, is estimated to be about 1.83. The effective R, the number of people infected in the current state of the population, fell to 1.29 between April 13 and May 10, likely due to the lockdown, and further decreased to 1.23 between May 16 and May 26, as IndiaSpend reported on May 29.

Though India’s R has fallen, it remains above one, which means COVID-19 cases are still growing exponentially. To bring the epidemic under control and decrease the number of cases, the R must be below one, so that each patient infects, on average, less than one other person, halting the spread of the virus. Assuming the current R of 1.22 persists, India could see nearly 300,000 active cases by June 29, up from 133,632 on June 10, estimated Sinha.

Changes in R are reflected in the doubling time of cases. At the start of the lockdown on March 24, it took 4.8 days for COVID-19 cases to double. This rose to 11.9 days on May 10, 15.1 days on May 26 and 16 days on June 4. The national doubling time now stands at 17.8 days, our calculations, based on a three-day moving average of cases from the Ministry of Health and Family Welfare, show.

These estimates are based on data on confirmed cases. India has tested nearly 5 million samples, amounting to 3.5 samples tested per 1,000 people (based on the government’s latest population estimates). The rate of testing in individual states also remains below that of similarly populated countries. Given low testing, it is possible that the confirmed case tally may not reflect the true spread of the virus and hence underestimate R, especially as asymptomatic patients may be omitted from the case tally, as IndiaSpend reported on May 18.

Some states’ R is higher than national average

The R remains high in many states. In Delhi, each COVID-19 patient infects 1.4 people and 1.3 in Tamil Nadu. Both states are testing at higher rates than the national average, with 7.8 tests per 1,000 people in Tamil Nadu and 13.7 in Delhi, as of June 8.

Cases are growing rapidly in Haryana and Assam with R values of 1.9 and 1.7, respectively. Though there are fewer cases in these states, with Haryana reporting 4,854 cases and Assam 2,565, the low doubling time of 6.4 days in Haryana and 8.2 days in Assam could rapidly increase the case tally. Haryana has tested five samples per 1,000 people and Assam 4.3.

“Increasing number of cases in states with higher R could drive up the national R in the coming days as more people will get infected, they will spread the disease to a larger pool of people,” said Sinha. 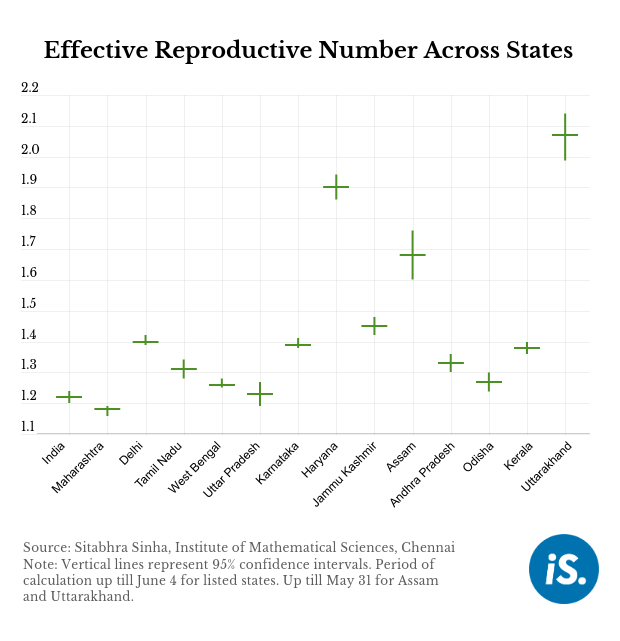 Maharashtra’s R has declined to 1.18, marginally below the national average. It’s doubling time rose from 8.9 days on May 5 to 21.6 days by June 8.

Gujarat, Madhya Pradesh, and Rajasthan have also slowed case growth to a sub-exponential trend. “This means the R in these states is around one as case growth exhibits linear changes,” explained Sinha. “If R is less than one, new cases will decline exponentially,” he added.

Active cases in Gujarat peaked on May 26, at 6,936. On June 9, Gujarat had 5,336 cases. At the current rate of case growth, it would take about 29.2 days for cases in Gujarat to double. Active cases have also declined in Madhya Pradesh and Rajasthan, where cases are doubling in 31 and 32.9 days, respectively.

However, testing in Madhya Pradesh has lagged behind the national average, with 2.5 samples tested per 1,000 people, leading to the possibility that infected patients, especially those who are asymptomatic, are not being adequately tested. Maharashtra, Gujarat, and Rajasthan have tested 4.6, 4, and 6.3, per 1,000 people, respectively.

What could be done

As most states reopen offices and public spaces including malls, temples and restaurants, while the R remains greater than one, the epidemic could flare up again. There should be restricted movement in urban areas with a high number of cases, public hygiene norms should be enforced, and efforts should be taken to ensure that cases in urban areas do not spread into the hinterland, Sinha said.

A staggered workforce, or periodic asynchronous lockdown, may be effective at containing case growth and hospitalisations, found researchers of Indian Scientists’ Response to CoViD-19, a group of scientists studying the COVID-19 outbreak, of which Sinha is a member. In an asynchronous lockdown, only about a third of the workforce goes to work on a given day, while others remain on lockdown. This would reduce the proportion of the workforce that can simultaneously come into contact with one another, thereby reducing the overall R of COVID-19. An intermittent lockdown, with short periods of working days followed by days at home, could also help neutralise the spread of the virus, Sinha added.

“In general, local programmes for lockdown on and off work better than one that is coordinated across the country. There should not be a one-size-fits-all relaxation policy, we should tailor for the ground situation,” Sinha said.

(Bharadwaj is an intern with IndiaSpend)