144,500 Jobs Affected As Tourism Takes A Hit In Kashmir

Srinagar: This spring if tourists do not arrive in Kashmir in large numbers, Ghulam Jeelani, 52 could well lose his job. The manager of a hotel in Srinagar’s tourist hub, Boulevard Road bordering the Dal Lake, has been warned by his employer.

Tourist arrivals in Kashmir fell after the Centre abolished its semi-autonomous status on August 5, 2019, and followed this with a communication clampdown in anticipation of unrest. While security restrictions were relaxed amid heavy troop deployment, the internet shutdown has yet to be lifted after nearly six months.

Following a Supreme Court order on January 10, 2020, the government announced it would restore 2G mobile data on post-paid mobile phones in all districts in Kashmir. But access was only allowed to a whitelist of websites as per the order, leaving internet curbs largely unchanged.

Just the day before August 5, 2019, Jeelani’s hotel--he did not wish it to be named--was almost fully booked. Of its 88 rooms, 63 were reserved. The day after the abrogation announcement, the bookings fell to three and have not risen beyond that number to date. Some days it does not have a single guest, Jeelani said.

“The number slightly improved in November during the winter games at Gulmarg,” a tourism official said on condition of anonymity. In December 2019, the numbers again fell to 6,954.

Despite this slump, on November 19, 2019, union tourism minister Prahlad Singh Patel maintained that the state’s tourism had not been impacted by the Centre’s moves. Patel, while answering a question in parliament, had clubbed together tourism figures for Jammu and Kashmir. Jammu draws pilgrims in large numbers to its Vaishno Devi shrine.

The communications blockade in the state has impacted it on multiple fronts, affecting enterprise, people’s access to critical health services and their mental health, as IndiaSpend reported in a series in September 2019.

Tourism accounts for 7% of the state’s gross domestic product.

‘This has broken the back of Kashmir tourism’

Comparable data for other months are shown in the table below.

There have been 144,500 job losses in Kashmir’s tourism and handicrafts sector--mostly dependent on earnings from travellers--since August 5, 2019, as per an estimate of the Kashmir Chamber of Commerce and Industry (KCCI).

“The back of Kashmir’s tourism sector has been broken because of the situation emerging after August 5, 2019: Tourism is in a shambles while artisans and weavers are jobless,” said Abdul Majeed, vice president of KCCI. “Doing trade without favourable conditions and the internet is unimaginable in the present-day world. In one fell swoop, irreversible damage has been caused to the state’s economy; not a single sector has been spared.”

Jeelani used to earn Rs 22,000 a month as a hotel manager but two months after the shutdown, his salary had been slashed to less than one-third--Rs 6,000 a month. “How do you run a household with Rs 6,000? And even that will go if tourists don’t arrive in the next few weeks,” Jeelani told IndiaSpend. 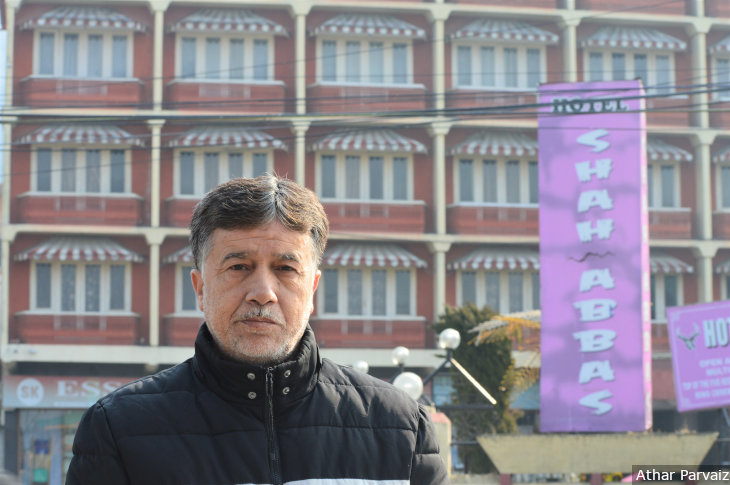 If tourists do not return to Kashmir this spring, Ghulam Jeelani, 52, a hotel manager in Srinagar, could well lose his job. The livelihood of up to 144,500 Kashmiris in the tourism and handicrafts sector has been hit by the tourist slump in the wake of the telecom and internet shutdown in the state since August 2019.

Jeelani sat chatting with idle shikarawalahs, boatmen who ferry tourists on the Dal. The pavement along the boulevard, which otherwise bustles with activity, was empty except for the group. There are around 4,000 boatmen in Srinagar who bank on tourist arrivals for their livelihood, said Bashir Ahmad Sultani, the head of the boatmen’s association.

Jeelani has not been able to pay the coaching institute where his daughter Mariya studies since October 2019 and had to plead for time. “The owner of the coaching centre obliged only because he is an acquaintance,” he said. “But how long can he wait? I just hope my full salary gets restored which is only possible if tourism resumes.”

The family mostly buys groceries on credit from neighbourhood shop.

‘It could get worse’

“All of us have been suffering since August 2019--there is no work at all as you can see,” said Sultani of the boatmen’s association, leaning against a pillar at the jetty and warming his hands over the kangri (a firepot kept under the pheran, a long winter cloak). “The only option is to work as labourers at construction sites. But not much of that work is available either and we wouldn’t know how to do it.”

The boatmen we met spoke of hard times, of families barely managing to survive. “Some of us cannot even manage two square meals for their families, forget about paying electricity bills or educating our children,” said Mohammad Shafi, a boatman.

In peak season, between July and November, shikaras used to earn between Rs 1,500 and Rs 2,000 a day, according to Shafi. “We lost the peak season this year to curfews, strikes and the long internet shutdown,” he said. “Our fear is that tourism will be hit even more if there are agitations for the restoration of Article 370 and statehood.”

(Parvaiz is a Srinagar-based independent journalist.)