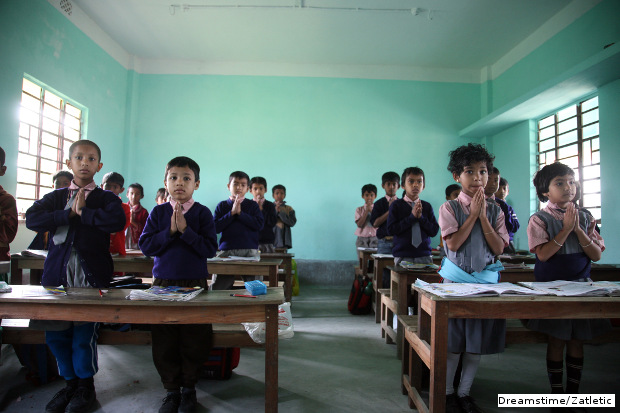 If you are an affluent and well-educated Indian, your children are likely to do better at school.

There seems to be a strong relation between affluence indicators and children’s learning outcomes, according to the 2014 Annual Status Report on Education (ASER).

"The credit for a child’s education goes not just to the school but to the parents as well,” Rukmini Banerji, director, ASER centre, told IndiaSpend.

Affluence ensures that households tend to be smaller, allowing parents to devote more attention to their children; they can also afford to pay for supplemental learning aids.

Students in the northern state of Himachal Pradesh, for example, do relatively well at math and reading; Himachal Pradesh being a state that reports high levels of affluence and parental education. The same was true for Kerala and Manipur.

The ASER report covered 577 rural districts across India and surveyed 16,497 villages, 341,070 households and 569,229 students. The ASER centre is an autonomous body under the Pratham network, which works across rural and urban areas to help children acquire basic skills in reading and arithmetic.

Overall, the situation with basic reading continues to be grim in India, with falling levels of learning. Only a fourth of all children in Standard (Std.) III can read a Std. II text fluently, a drop of more than 5% over four years.

With math, a quarter of children in Std. III could not recognise numbers between 10 and 99, a drop of 13% over four years.

So, is there any difference in outcomes between public and private schools? The enrolment in private schools is going up, as we explained in our earlier report on ASER 2013. Private school enrolment stood at around 18.7% in 2006, and has steadily increased to 30.8% in 2014.

The learning outcomes of private schools tend to be much better than public schools.

We can see that reading and math skills of students in private schools are much better than their counterparts in government schools.

Overall, there has been a steady decline in math and reading skills since 2010 across private and government schools.

Let us now look at the top five states with the best learning outcomes and the percentage of children enrolled in private schools.

A striking correlation is evident in learning outcomes in Manipur and Kerala, where a majority of children, 73% and 62%, respectively, is enrolled in private schools.

The exception is Himachal Pradesh, which tops the list in reading ability but only has 35% of its students in private schools.

Comparing learning outcomes of children in government schools with those in private schools may not be appropriate though, since it is a fact that household and other characteristics of private-school students are very different from those of children from government-schools.

A study by ASER looking at factors affecting learning abilities came up with two key considerations: the educational background of parents and affluence. Affluence was measured by using proxies like mobile and electricity. 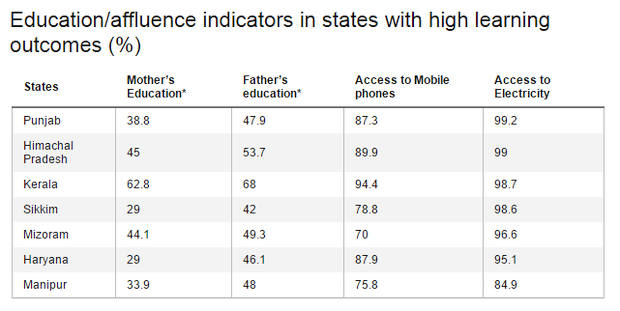 Source: ASER; *refers to education from Stds. VI to X

Himachal Pradesh, where children do well in both math and reading, also has 99% of its households connected to the power grid, impacting learning outcomes in a positive manner. We can also see the same outcome in Kerala and Manipur.

“When you control for factors such as parents’ education and other facilities at home, it has an impact on children’s learning outcomes and not just enrolment into private schools," said Banerji. "So while making policy-related decisions, all these other factors must be kept in mind."