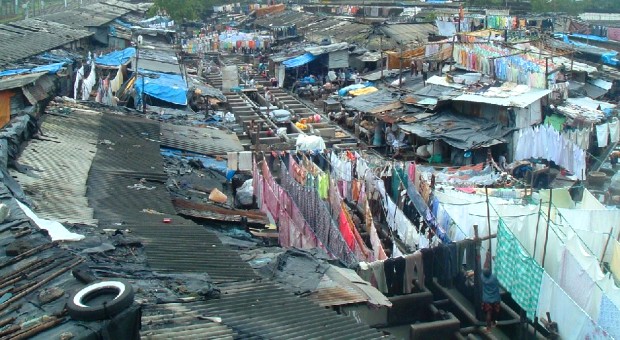 “In the past 8 years, our economy has grown at a record annual rate of 8.2%. We have ensured that poverty has declined much faster, agriculture has grown faster, and rural consumption per person has also grown faster. We need to do more, and we will do more. But to achieve inclusiveness, we need more growth.”

But does high growth necessarily lead to poverty alleviation? Or can there be growth but without commensurate reduction in poverty? Or, can you reduce poverty without high growth? And if so, how? We might not be able to answer the 'how’ question here but the data suggests that it’s possible.

While India has shown impressive growth rates in the past decade, poverty remains a key concern. The Suresh Tendulkar Committee (formed to look into the number of people living below the poverty line in India) estimates for 2009-10 put poverty at around 30%, an improvement from the 37% just five years before in 2004-05. This is also the period that India saw strong economic growth - of 8.7% against the 6% in the five years before.

Now let’s look closer at the figures to see how far this correlation is validated at the state level. We consider two sets of numbers – the 2004-05 and 2009-10 poverty figures, and the 5-year compounded annual growth rate (CAGR) for India’s economic growth corresponding to the two years.

We find that the spurt in growth between 2004-05 and 2009-10 across states and union territories (UTs) is indeed associated with a sharp lowering in poverty rates. However, if we consider only 2009-10 data (the year for which the national poverty estimate is at 30%), the fastest growing states do not necessarily have the lowest poverty rates.

For India as a whole, poverty fell by exactly 7.4 percentage points in 2009-10 from 2004-05, while growth accelerated by 2.7 percentage points. Now let’s go state-wise and look at the top 10 states and UTs with a decline in poverty rate in excess of the all-India average.

Seven of these have also shown a higher than all-India average increase in GDP. While smaller states like Sikkim and Goa show an impressive decline in poverty rates as well as above average GDP growth rate (Figure 1 a), larger states like Uttarakhand, Maharashtra, Madhya Pradesh and Tamil Nadu are not far behind either.

Madhya Pradesh, for instance, has seen the sharpest acceleration in GDP growth among these 7 states (of over 6 percentage points) and a decline in poverty rate by almost 12 percentage points. A similar case is seen in Uttarakhand as well.

While these trends indicate the correlation between poverty rates and GDP on the whole – the real proof of the trend lies when we look at poverty trends from the opposite direction. If we consider states– like Delhi, Manipur, Mizoram, Meghalaya and Nagaland – that have seen an increase in poverty over the period, three of them have a lower-than-average change in GDP growth. 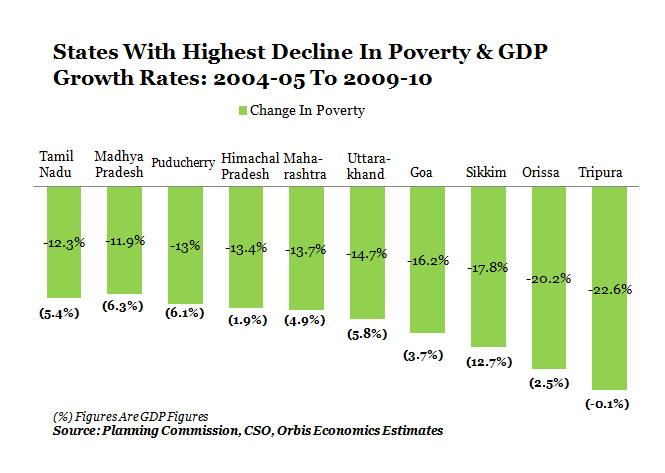 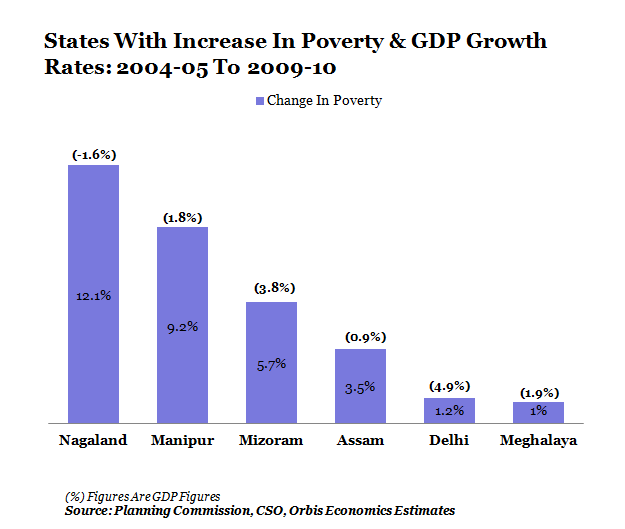 The correlation between poverty and GDP growth is not quite so obvious if we look at the numbers only for 2009-10. Of the top 10 states and UTs with the lowest poverty rates, only half have higher-than-national average GDP growth of 8.7%. And even these five have more UTs than states with Delhi being a special state. This, then, suggests that high growth does not necessarily mean low poverty.

However, there are cases to suggest that high poverty rates do go hand-in-hand with below average growth. If we turn the data around and analyse the eight states with higher-than-average national poverty rates – Bihar, Chhattisgarh, Manipur, Jharkhand, Assam, Uttar Pradesh, Orissa and Madhya Pradesh - we find that only one of them, Orissa, has growth equal to an all-India average while the rest lie under that growth rate.

While it is debatable whether we should strictly consider the 8.7% mark as the dividing line for GDP growth when states like Bihar, Chhattisgarh and Madhya Pradesh have shown robust growth of over 8% over the period, it does provide a framework for analysis.

In fact, it also goes on to provide further evidence that even with high growth (higher or lower than India average not withstanding), poverty does not magically disappear altogether. Moreover, large state economies like Maharashtra, Gujarat and Andhra Pradesh all have poverty rates in excess of 20%.

However, when you look at the 10 states with the largest increase in GDP from 2004/05 to 2009/10, all but Delhi and Mizoram show a corresponding decrease in poverty-- with 7 of the states showing close to a 10% decrease or more. 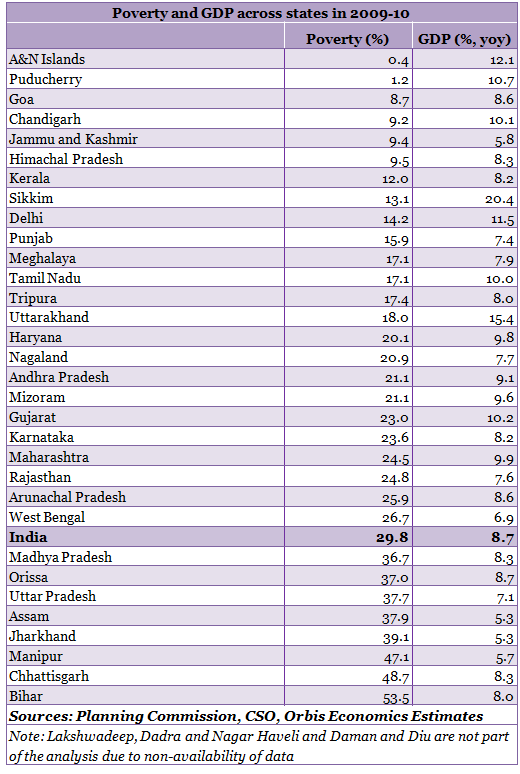 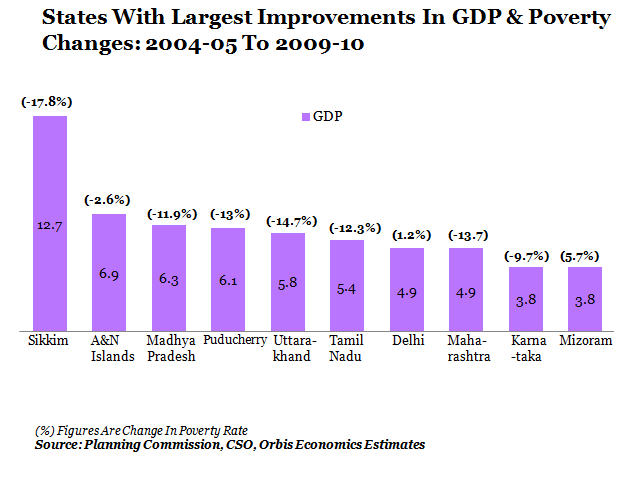 It does seem, therefore, that while a pickup in growth can result in sharper declines in poverty, high growth, by itself, does not ensure that poverty will go away. As is quite evident now. While a trickle-down effect can reduce poverty, it might not happen at all or may take longer. However, poverty could be reduced with other forms of intervention or better quality of interventions, perhaps by the Government.

So, while strong GDP growth (both in change and absolute levels) might be largely a necessary condition for reducing poverty in India, it is hardly sufficient.