Worst Year Ever For MGNREGA, 23% Drop In Assets Created 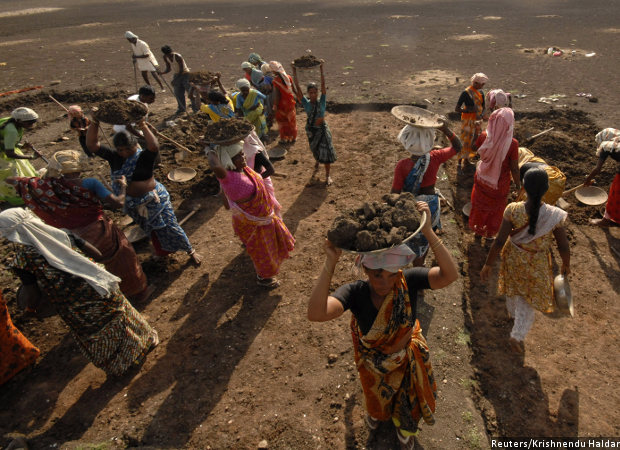 Labourers work on a dried lake to try and revive it under the Mahatma Gandhi National Rural Employment Guarantee Act (MGNREGA) on the outskirts of Hyderabad.

After spending about Rs 3.5 lakh crore ($51 billion)--almost equal to India's subsidy and pensions budget for 2015-16--over 10 years on the world's largest rural jobs programme, it has provided less than half the guaranteed 100 days of employment to 50 million poor households.

This is revealed in our analysis of Mahatma Gandhi National Rural Employment Guarantee (MGNREGA) data. Other facts:

These findings are in line with IndiaSpend’s earlier analysis of MGNREGA (Read here, here and here).

A safety net for rural areas, MGNREGA guarantees 100 days of paid, unskilled manual work every year to every rural household.

“It is the largest and perhaps the most ambitious social security and public works programme in the world,” Jairam Ramesh, former union rural development minister, who launched MGNREGA, said.

With the programme completing 10 years, we evaluated its impact. Here’s a look at the national-level data for the past four financial years.

Clearly, the popular demand of increasing the number of guaranteed work days under MGNREGA will not help since the existing promise of 100 days is not being met.

Barely 50 million households have found work through MGNREGA and less than 10% of these households have been able to get 100 days of wage employment. Clearly, either work is not being provided or not being demanded.

Just about 40% of the workers get paid within the promised 15 days. For unskilled MGNREGA workers, not getting paid in time is detrimental to domestic finances. Perhaps this will change with 210 million new Jan Dhan (People’s Wealth) accounts opened, into which the government can directly pay wages.

There has been no significant increase in the number of assets created each year, with last year the worst ever, as we said, with a 23% drop from 2014-15.

The durability of the assets is questionable. Currently, the law says that 60% of funds should be spent on wages and 40% on material, which means a preponderance of labour-intensive works, not structures that require more and better material.

MGNREGA has brought parity in labour force participation, one of its few successes.

There has been a constant demand to increase the MGNREGA budget. The most money was spent last year, Rs 42,084 crore ($6.1 billion), about 0.3% of India's Gross Domestic Product (GDP).

More than 95% of MGNREGA funds have been used over the last two years. This is a positive, but there are allegations of corruption.

The expenditure on agriculture was the highest ever in 2015-16.

Per person wage and cost has gone up steadily over the years. The average wage rate in 2015-16 was Rs 154 per day, a 27% increase from four years ago. Yet, the labour participation in MGNREGA has not grown, proven by the fact that only 2.3 billion person-days of labour were generated both in 2015-16 and 2012-13, despite a 27% wage increase. Critics claim MGNREGA wage rates have distorted the farm-labour market, while supporters argue wages must be increased to match market rates for unskilled labour.

Why MGNREGA needs a rethink

After 10 years, it is clear that MGNREGA has not met most of its goals.

Poor participation shows that work is either not provided or demanded. Rural productivity remains poor, which raises questions about the quality of assets built with MGNREGA funds. Even the most vocal supporters of MGNREGA agree that the project has failed to produce durable assets and is mired in corruption.

This centrally-sponsored mega scheme could definitely be better targetted--at India's poorest districts, where demand for work is high or limited to off-season periods.

Keeping with the spirit of cooperative federalism, the money could be given to the states directly to spend on schemes that work for them.

Either way, the government needs to seriously rethink its commitment to MGNREGA.