New Delhi: A video of women from Phulambri, Aurangabad in Maharashtra running behind a water tanker--sprinkling water over newly constructed road--to fill their buckets went viral on social media on June 2, 2019.

With 80% of districts in Karnataka and 72% in Maharashtra hit by drought and crop failure, 8.2 million farmers in these two states struggle to survive. More than 6,000 tankers supply water to 4,920 villages and 10,506 hamlets or settlements (bastis) in drought-hit Maharashtra daily, as a conflict brews between the two states over common water resources.

Further south, the Tamil Nadu government sanctioned Rs 233 crore for several emergency water projects, as the water supply in four reservoirs supplying water to Chennai dropped below 1% of their capacity, causing an acute water crisis, which shut down Chennai’s metro system. With piped water cut by 40%, people line up in queues for water tankers. They also complain of foul-smelling water, as if it were mixed with sewage.

Districts in Karnataka have shut schools for an extra week due to water scarcity. Short duration summer crops in Tamil Nadu and Maharashtra are taking a hit.

The situation is similar across India as the country is currently experiencing an acute water crisis, as we explain later. There is no respite in sight anytime soon as the southwest monsoon this year, responsible for 80% of India’s rainfall, is projected to be delayed and below normal in north and south India.

As of May 30, 2019, more than 43.4% of the country was reeling under drought, according to the Drought Early Warning System (DEWS), a real-time drought monitoring platform. And failed monsoon rains are the primary reason for the current situation. India has been experiencing widespread drought every year since 2015, with the exception of 2017, IndiaSpend reported on April 3, 2019.

The north-east monsoon, also known as ‘post-monsoon rainfall’ (October-December) that provides 10-20% of India’s rainfall, was deficient by 44% in 2018 from the long-term normal of 127.2 mm, as per data from the India Meteorological Department (IMD). This compounded the rainfall deficit in the southwest monsoon (June-September), which fell short by 9.4% in 2018--close to the 10% deficit range when the IMD declares a drought, said the IndiaSpend report.

Monsoon rainfall is of special significance as India’s surface and groundwater resources continue to dwindle, as we explain later.

Water levels in India’s 91 major reservoirs plummeted to 20% of their capacity on May 30, 2019. This is lower than the levels last year and is also less than the average levels in the past decade.

To deal with the water crisis in the country--where 600 million, half the population, face “high-to-extreme” water stress every year--the Narendra Modi government in its second term, on May 31, 2019, has declared taking piped drinking water to every household by 2024 under a ‘Nal Se Jal’ scheme. The mission will be undertaken by a newly formed Jal Shakti ministry, which amalgamates the ministries of water resources, river development and Ganga Rejuvenation with the Ministry of Drinking Water and Sanitation.

The first challenge of the scheme would be availability of water.

The total water resource base for India, including surface and groundwater, is 2,518 billion cubic meter (bcm). In India, only 690 bcm of 1,869 bcm (37%) surface water resources can actually be utilised because of contamination. Only 230 bcm of the 400 bcm (58%) groundwater is accessible, data on groundwater show, Niti Aayog, the government’s policy think tank, said in this 2018 report.

Groundwater, the source of 40% of India’s water needs, is depleting at an unsustainable rate, the Aayog said. India is the world’s largest groundwater extractor--accounting for 12% of global extraction. As a result, 21 Indian cities--including Delhi, Bengaluru, Chennai and Hyderabad--will run out of groundwater by 2020, affecting 100 million people, and 40% of India’s population will have no access to drinking water by 2030, the report said.

If mitigation measures are not implemented, India faces a 6% loss in its gross domestic product by 2050, when the demand for water will exceed the supply, the Niti Aayog’s report said, calling for “immediate action” from the states. This scarcity of water will also increase the country’s health burden: currently, 200,000 Indians die every year due to inadequate access to safe water.

India holds about 4% of global freshwater and 16% of its population. With nearly 70% of water contaminated, India ranks 120th of 122 countries in a global water quality index, the Niti Aayog report noted.

On groundwater augmentation, 10 of the 24 states scored below 50%, highlighting the worsening situation: 54% of India’s groundwater wells are declining, said the report.

In 2015-16, 14 of the 24 states analysed scored below 50% on water management and have been classified as “low performers”. These states are concentrated across the populous agricultural belts of north and east India and the northeastern and Himalayan states.

“Water Index scores vary widely across states, but most states have achieved a score below 50% and could significantly improve their water resource management practices,” the report said.

How the situation deteriorated

While the southwest monsoon failed in 2018, a year preceded by consecutive droughts since 2015, as we said earlier, the pre-monsoon rains in 2019 (March 1 to May 31) were also low. The 92 days of the pre-monsoon period recorded 23% less rainfall than the 50-year average--lowest in 65 years--according to rainfall data from the IMD. 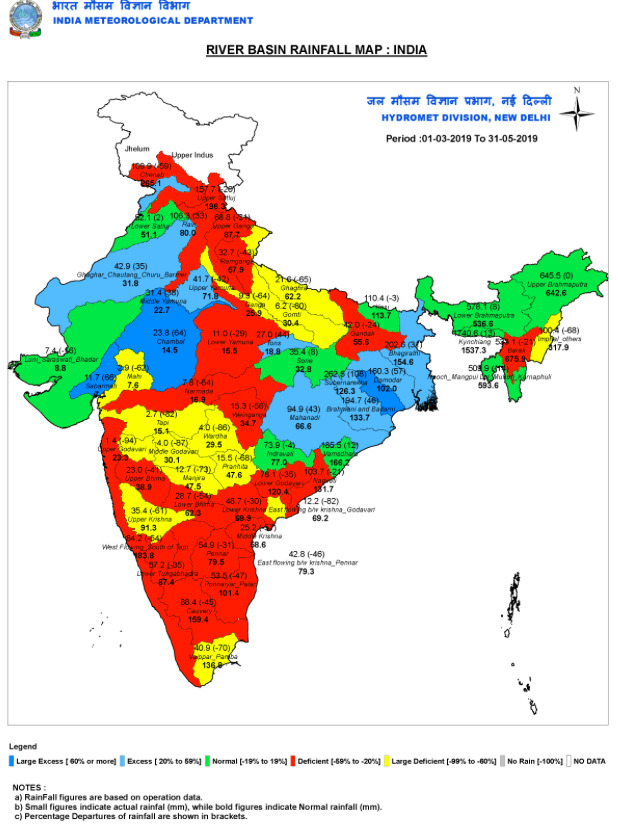 Lack of rains forced these regions to use up their reservoirs. On May 30, 2019, when average water levels in 91 reservoirs were at 20% of their total capacity, as we said above, the 31 reservoirs of southern peninsula--Andhra Pradesh, Telangana, Kerala, Karnataka and Tamil Nadu--were left with only 11% water of their capacity.

In 27 major reservoirs in the western region--which includes Gujarat and Maharashtra--water levels were at 11% of storage capacity.

This lack of water was compounded by the heatwave that has gripped most states of India with temperatures crossing 50 degree Celsius (deg C) mark. In western Rajasthan, Churu experienced the highest temperature nationwide at 50.8 deg C on June 2, 2019, followed by Sri Ganganagar at 49.6 deg C. Both towns were among the eight hottest places from India, which made it to the list of 15 hottest places in the world that day.

India has faced a severe drought every eight or nine years, Rainfall data over the past century indicate. Yet, three in five districts are not prepared for drought, said a September 2018 paper published jointly by the Indian Institutes of Technology, Indore and Guwahati, as IndiaSpend reported on April 3, 2019.

At least 133 of the 634 districts that the paper studied face drought almost every year; most of them are in Chhattisgarh, Karnataka, Maharashtra and Rajasthan, said the study that assessed how efficiently districts use water when dealt with hydroclimatic disturbances.

How India can manage its water resource

Agriculture uses up to 80% of all water resources in the country, the Aayog’s report said, making it critical to rationalise water use in this sector. Drinking water accounts for only 4% of the water consumption in India.

India has the potential to bring nearly half of its net cultivated area--140 million hectares--under micro irrigation. But so far, only 7.73 million hectares (mha)--drip irrigation covers 3.37 mha and sprinkler irrigation covers 4.36 mha--as against the estimated potential of 69.5 mha has been covered under micro-irrigation, said Samrat Basak, an expert on water-related issues from World Resource Institute, an advocacy, as IndiaSpend reported on June 25, 2018.

Research shows that sprinkler irrigation can use 30-40% less water, while drip can use about 40-60% less water compared to flood irrigation methods, he added.

As of June 2018, the Central Ground Water Board--a central authority to monitor and manage water groundwater resources of the country--has a network of 22,339 groundwater observation wells in India, which means one monitoring point for approximately 147 sq km--about the size of Mysuru.

India also needs a “National Urban Water Policy which will define amongst other things what is a water smart city and provide guidelines: to harvest rainwater to its full potential, recharge the groundwater and regulate groundwater usage”, Himanshu Thakkar, coordinator at the South Asia Network on Dams, Rivers and People, told IndiaSpend. “Protection of groundwater and local water bodies is a must,” he said.

Instead of spending thousands of crores on cleaning rivers, the government should propose a river law that prevents industries and people from contaminating the water of the rivers, Manoj Mishra, executive director of the PEACE Institute Charitable Trust and head of Yamuna Jiye Abhiyaan, told IndiaSpend. “Instead of cleaning water entering the rivers, the Sewage Treatment Plants “should be used to clean our waste and then reuse and recycle that water for non-drinking water needs”, he added. Currently, 63% of sewage waste water goes untreated in India.

(Sharma is an intern and Tripathi is a principal correspondent with IndiaSpend.)