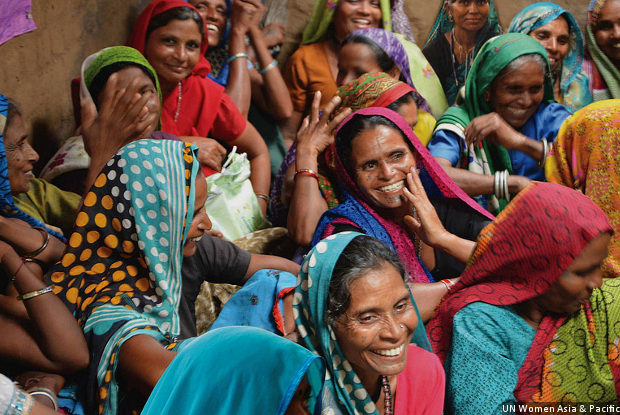 Female empowerment indicators in India showed improvement over a decade, but too many women face spousal violence and too few own land, according to an IndiaSpend analysis of data from the 2015-16 National Family Health Survey (NFHS). Research suggests that women who own land and other assets face lower levels of spousal violence.

The empowerment indicators are based on data from 14 states and two union territories. Until now, the International Institute for Population Sciences, the Mumbai-based organisation tasked with collecting and analysing NFHS survey data, has yet to release data for other states, including several of India's most backward states: Jharkhand, Chhattisgarh, Odisha, Rajasthan, Uttar Pradesh and Uttarakhand. The 2005-06 NFHS provides comparative data for 12 out of the 14 states, and did not cover any union territories.

This is the first time the NFHS has collected data on land owned by women, use of hygienic methods of protection during menstruation, and experience of violence during pregnancy. No other nationwide survey in India measures ownership of land by women.

Research suggests that the actual number of women who have complete ownership over land would be lower.

Women in rural areas of Karnataka individually owned no more than 14% of all plots, while they owned 22% of all non-farm business activities in urban areas, according to this 2011 study published by the Indian Institute of Management in Bangalore. Women in Karnataka owned less land (20%) when compared with other developing countries like Ecuador (51%), and Ghana (36%), according to this 2011 study.

Research suggests that ownership of assets such as land and housing is especially important because it increases a women's bargaining power in the household, and is correlated with decreased violence within the household. In Kerala, for instance, owning property, among other things, reduced the likelihood that a woman will be physically assaulted in a marriage, according to this 2005 study.

Bank accounts owned and used by women show the biggest improvement in the last decade of any indicator of women empowerment. The greatest increase was in the state of Tamil Nadu where bank accounts for women rose by 61.1 percentage points, from 15.9%, as measured in 2005-06, to 77%, according to data from the 2015-16 NFHS. Most women in Goa, 82%, own and use a bank account, followed by the Andaman and Nicobar Islands, at 81.8%, and Tamil Nadu, at 77%, according to data from NFHS 4.

As many as 358 million Indian women now have a bank account, IndiaSpend reported in August 2016, with more than 75 million added to banking system in 2014 alone.

Many women still use unhygienic methods of protection during menstruation

More women participate in decision making within the household

All states except Assam, Haryana and Tamil Nadu saw an increase in the percentage of women who usually participated in household decisions--from an average of 83.1% in 12 states to 87%, over the decade ending 2015-16.

The greatest increase was in the state of Madhya Pradesh, where 68.5% women participated in decision making within the household, a 14.3 percentage-point increase from 2005-06.