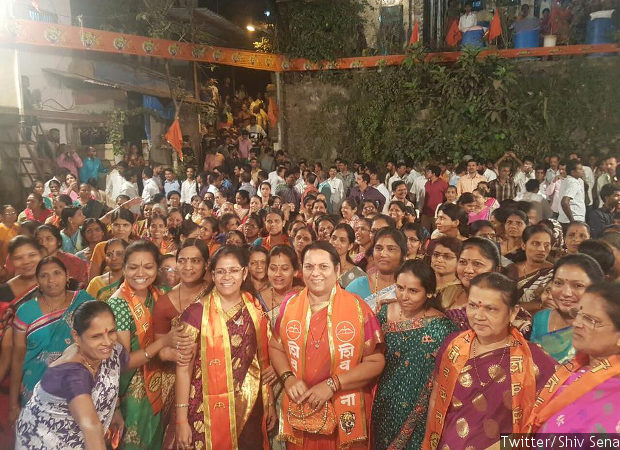 Female leaders of the Shiv Sena campaign, ahead of the elections to the Municipal Corporation of Greater Mumbai (MCGM) to be held today. Shiv Sena’s female corporators attended the largest number of council meetings at the MCGM, and had the third highest average of annual funds spent, analysis of data for the period 2012-16 shows.

India’s richest municipal corporation has more female corporators than men: The women are better educated, younger, and 3.3% have criminal records compared to 31.8% of men--but they ask fewer questions than the men, according to an IndiaSpend analysis of female corporators of the Municipal Corporation of Greater Mumbai (MCGM) as municipal elections are held today.

Female corporators from prosperous western wards had the best attendance and asked the most questions.

The Shiv Sena’s women corporators had the best attendance rates at council meetings, while their Nationalist Congress Party (NCP, with eight women) counterparts asked the most questions.

Who attended the most meetings?

Who asked the most questions?

Five of the top 10 female corporators, by questions asked per year, are from the Shiv Sena party.

Female NCP corporators had the highest average of questions, 19, followed by those of the BJP. Again, the independent candidates had the lowest average: Five.

Most questions raised came from western Mumbai wards, while the L ward (Kurla, Chandivali, Sakinaka)--which had the second lowest Human Development Index amongst all Mumbai wards, according to the city’s Human Development Report in 2009--had three corporators in the top 10, by questions asked. Female corporators from the western suburbs also asked the most questions, as we said.

Who spent the most?

Four of the top five spenders refused interviews to discuss their work, as did almost 27% of female corporators that Praja Foundation, an NGO working on governance issues in Mumbai, approached.

Female corporators from the L ward spent the most money, with 50% of the top ten spenders from this ward.

Most of the corporators spent most money on roads, followed by recreation, improvement in water and sanitation. Housing was given the least importance.

Most corporators who set aside funds for multiple issues were graduates.

When it came to average annual funds spent, the Shiv Sena ranked third, after the Samajwadi Party and the NCP. Again, the independent candidates fared the worst.