With Deadline 1 Month Away, UP's Homes For Urban Poor 73% Incomplete 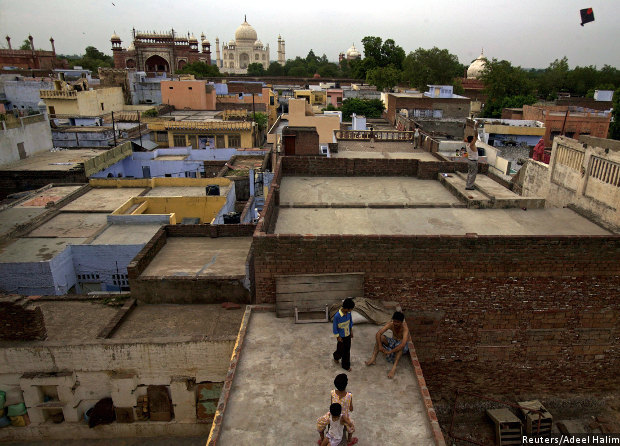 A man flies a kite on the roof of his house near the Taj Mahal in Agra, Uttar Pradesh. One in four people in UP’s urban areas–or 8.5 million of 34.5 million–lives in a slum, and the state’s cities and towns host India’s highest proportion of homeless people (18.5%).

Although 60% of the money has been released, no more than 27% of 24,310 free homes intended for the urban poor had been built till August 2016 across 53 districts in India's most-populous state, Uttar Pradesh (UP), according to new data released by the state government.

Apart from the 6,442 homes completed under Aasra (assistance), the state government’s free housing programme for the urban poor, 5,500 homes (23%) have not been started, and 12,248 (50%) are under construction, the data show. All these homes were to be finished by November 2016, according to a right-to-information (RTI) response this writer received from UP's urban development authority on May 25, 2015.

One in four people in UP's urban areas--or 8.5 million of 34.5 million--lives in a slum, and the state's cities and towns host India's highest proportion of homeless people (18.5%).

Until May 2015, no homes had been finished, according to the RTI response, IndiaSpend reported in June 2015. So while the newly completed homes indicate some progress, it is apparent the housing scheme is faltering.

We found that the UP government had got even the data wrong for 10 districts. The figures for houses being built, completed, and yet to be started do not tally with the target of homes to be built. With inconsistencies in data, it becomes difficult to gauge the extent of progress of the project.

As Prime Minister Narendra Modi pushes for the construction of two million homes for the urban poor by 2020, the Aasra programme reveals how tardy implementation can stymie government-run housing efforts.

Although the programme has been officially launched in all of UP's districts, until August, 15 districts had not been assigned construction targets, although two of these districts had been given money to build homes.

In the eastern district of Sonbhadra, Rs 63 lakh has been spent, but there are no homes under construction or completed, according to the website of UP's programme implementation department.

The highest target (4,402 homes) has been set for the eastern district of Rampur, the constituency of UP’s minister of urban employment and poverty alleviation, Azam Khan, who is in charge of implementing the Aasra programme.

The constituency has also been allocated the largest amount, followed by Mahoba in the southern region of Bundelkhand.

At least 85% of the work has been completed in Ambedkar Nagar and Baharaich, with Basti and Faizabad coming in second at 78%. Barring those districts where work has not yet started, the slowest rate of home-building is in Agra, followed by Kanpur-Suburban.

Although the new scheme was started in 2012-13, replacing MKSGY, the first homes were completed only over the past year.

The Aasra scheme will fall short when compared to MKSGY, started by the previous government, headed by Mayawati, which built 132,700 houses between 2008 and 2010.

Despite the poor quality and infrastructure, homes built under the scheme were sought after by homeless people, IndiaSpend reported in June 2015.

(Chaturvedi is an independent journalist and a blogger at OpinionTandoor.in)