Will States Matter On May 16?

India’s gargantuan diversity of its myriad languages, castes and cultures finds political expression through a bewildering array of 1,616 registered political parties, of which six are national parties and 47 state parties. Since the 1996 election, these regional and smaller parties have held sway over government formation in New Delhi, and its continuity. This is often a prime suspect for decision-making paralysis, chaotic policies and a seemingly perpetual state of political instability.

A feeling of helplessness over this volatile political and policy climate has even elicited bizarre suggestions from business leaders and political analysts, such as banning regional parties from contesting national elections and so on. 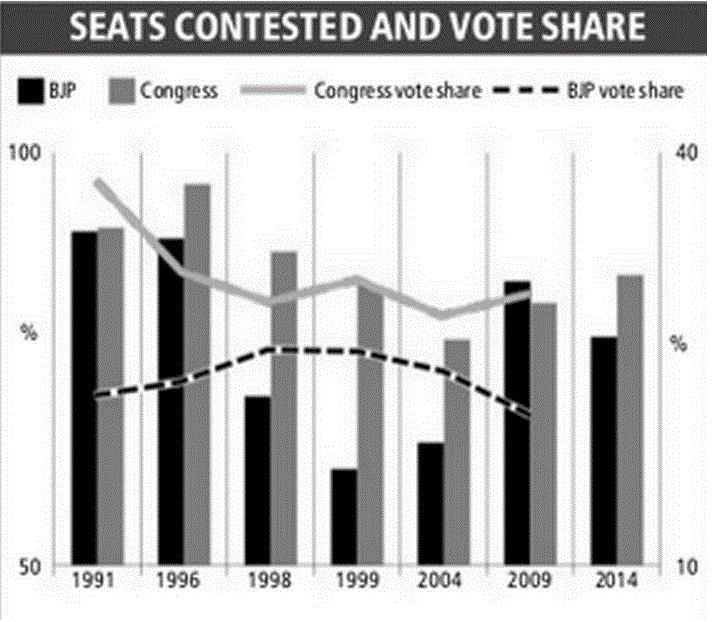 The 2014 general election is the most crowded in India’s history, with an audacious attempt by the Narendra Modi-led BJP at nationalising its campaign, and one in which the two major national parties are contesting the most number of seats since 1996. As we await the results, the outcome will decisively answer if India’s political future will be “nationalised”, or will Delhi continue to be run on the veto power by regional parties. This has significant implications for India’s future.

Of the 12 largest states that account for 440 of the 543 Lok Sabha seats, the Congress and BJP together contested in 82 per cent of the seats in this election, the highest since 1996. This can be viewed as an indicator of the national parties’ confidence in contesting elections across the country on their own vis-à-vis a pre-poll alliance with a regional party. Historically, there has been a negative correlation between the number of seats contested by the national parties and their winning percentages, that is, the more seats they contest, the lower their overall vote share, thus emphasising the significant influence of regional parties and the need for alliances.

In a piece titled ‘Why waves don’t matter’ (IE, April 2), I argued, using electoral data, how India’s national elections in the past have really been a series of state elections held simultaneously where voters voted on more local, state-specific issues or trends and not as per any national narrative. Even during the supposedly national anger-wave sweeping the country against Indira Gandhi’s Emergency in the 1977 election, the southern states of Tamil Nadu, Karnataka, Andhra Pradesh and Kerala accounted for nearly 25 per cent of all Lok Sabha seats that voted for the Congress. Subsequent elections have only exacerbated this trend and spawned various regional parties to better cater to these regional demands.

A closer observation of Figure 1 shows that, for example, the BJP’s vote share of 26 per cent in these 12 states was the highest in the 1999 election, when it contested only in 62 per cent seats, the lowest in 25 years. Figure 2 shows the combined tally of both the national parties in terms of seats contested and seats won. It is evident that in 2004, when the Congress and BJP combined contested nearly 71 per cent seats in the 12 largest states, their winning percentage, at 40 per cent, was the highest. And when they contested 93 per cent seats in the 1996 election, their winning percentage was an all-time low of 30 per cent. Simplistically put, historically, the fortunes of the two national parties have depended largely on their ability to strike the right alliances and not on trying to contest and win seats on their own.

Without counting the fledgling Aam Aadmi Party, the 12 largest states will have 13 major parties or alliances contesting a majority of seats in a particular state. This number was seven in the 2009 elections and five in the 1999 and 2004 elections. For example, in Tamil Nadu, where the Congress and BJP have traditionally always had an alliance with one of the regional parties, this is the first election in a long time where both the Congress and BJP will contest without allying with either of the two dominant regional parties — the AIADMK and DMK. Similarly, in West Bengal, there is no alliance for either of the national parties with Mamata Banerjee’s Trinamool Congress. Shekhar Gupta, editor-in-chief of The Indian Express, at his book launch in Mumbai last week, fleetingly observed how the recent political strategies of both the Congress under Rahul Gandhi and the BJP under Narendra Modi were a throwback to the 1970s and 1980s in terms of capturing power on their own strength rather than through regional alliances. In a Q&A session with Mumbai businessmen, he remarked that the influence of regional parties on national politics is waning. Historical electoral data, however, does not support this thesis of waning influence of regional parties. But can the 2014 election mark a reversal of this trend, give credence to and bolster the confidence of both the Congress and BJP to further embark on this “nationalisation” drive?

(This article first appeared in The Indian Express. The author is founding trustee, IndiaSpend.)