Why UP Can’t Deliver What Voters Want: Clean Air & Water 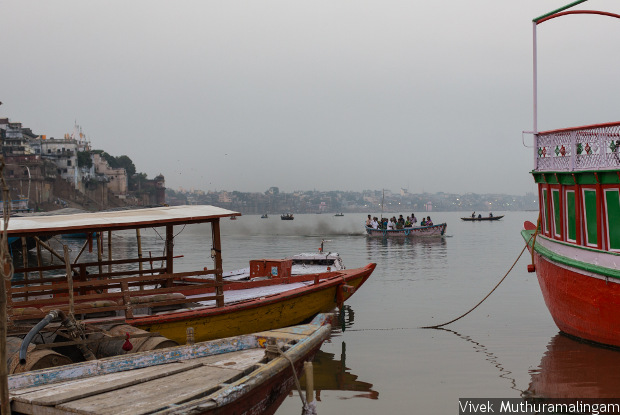 Boats docked on the bank of the river Ganga, in Varanasi, Uttar Pradesh. Air quality is the third most important issue in the upcoming UP elections, said voters according to a survey.

As many as 46% of urban voters and 26% of rural voters polled before elections began in Uttar Pradesh (UP), said that the air they breathe is polluted, according to a survey conducted by FourthLion Technologies, a data analytics and public opinion polling firm, for IndiaSpend. But air pollution isn’t an issue that political parties in UP address–or want to.

UP’s air is fouled by thousands of brick kilns, sugar factories and coal-fired power plants that violate new emission standards and are among the country’s dirtiest; a seventh of India’s most polluted zones and half the country’s cities with the worst air quality are situated in the state.

The pollution-control regime is not capable of enforcing clear-air and clean-water laws, and attempts to do so have led to widespread protests.

About 138 million people will vote in the UP legislative assembly elections, which started on February 11, and polling will unfold in seven phases until March 8, 2017.

When asked to choose between the three issues of reliable power, clean water and clean air, as important voting issues, 40% of the voters polled said reliable electricity was most important, 28% cited clean water and 16% said air quality.

Power cuts were the leading issue for voters, followed by jobs, clean water and air quality, IndiaSpend reported on February 6, 2017.

But attempts at cleaning up even brick kilns have met with protests.

UP has six of India’s 43 polluted zones, five of 10 with worst air quality

Between 2009 and 2013, only Agra and Varanasi of six UP industrial zones have managed to improve their score on a national pollution index, while Singrauli has worsened.

Zones with a score over 70 are considered critically polluted.

In terms of air quality, half of India’s most polluted cities were in UP--Allahabad, Varanasi, Lucknow, Ghaziabad and Agra occupied spots in the top 10--as the Hindustan Times reported on February 8, 2017. Air quality was measured in 46 cities with a population of more than a million.

UP’s power plants are amongst India’s most polluting and have some of the lowest environmental ranking, according to a two-year study conducted by the Centre for Science and Environment (CSE), an environmental think tank based in New Delhi. Four of the 47 plants selected for study (accounting for 11% the capacity of the total sample) were in Uttar Pradesh.

Of these, the state-owned Obra and Anpara-A & B located in the critically polluted district of Sonbhadra performed poorly and ranked very close to the bottom of the pile: At 40th position (12% score) and 46th position (8% score), respectively. NTPC-Singrauli was found to be grossly polluting as well, the CSE report said.

UP produces close to 10% of India’s coal-fired electricity, with 11 power plants located in just eastern UP, in the Purvanchal region. Emissions from coal-fired power plants can travel hundreds of kilometres, depending on wind speed, driving up pollution levels, especially during winter.

Coal generates almost 75% of India’s electricity, as IndiaSpend reported in May 2015. To provide ‘electricity to all’, coal-fired capacity in India is projected to double between 2012 and 2022.

Adverse health effects include premature death and increased health costs, as IndiaSpend reported in May 2015.

“The atmospheric inversion over the Indo-Gangetic plain exacerbate the pollution in the air because particles don’t disperse,” said Aishwarya Madineni, an independent air-quality researcher.

In December 2015, the ministry of environment, forest and climate change revised air-quality standards for coal-fired thermal power plants. The new standards aim at reducing emissions of particulate matter (or particulates) called PM 10 to 0.98 kg/MWh (a measure of permissible particulate weight for energy excavated from power plants, which is measured in kilogram/megawatt hour); sulphur dioxide to 7.3 kg/MWh and oxides of nitrogen--their presence in the air modifies other pollutants--to 4.8 kg/MWh, to improve ambient air quality. Before 2015, India had no such standards in place.

About 40 times as fine as human hair, PM 10 particles are carcinogenic and can cause serious health problems; sulphur dioxide can cause respiratory problems and oxides of nitrogen modify other pollutants, such as particulates and ozone, to become toxic acid rain.

“The new standards are supposed to be implemented by the end of 2017,” said Madineni. “However no penalties have been mentioned in the compliance report if the standards are not adhered to.”

Brick kilns are the third-largest consumers of coal in India. UP has over 18,000 operational brick kilns, which operate seasonally between December and June every year. 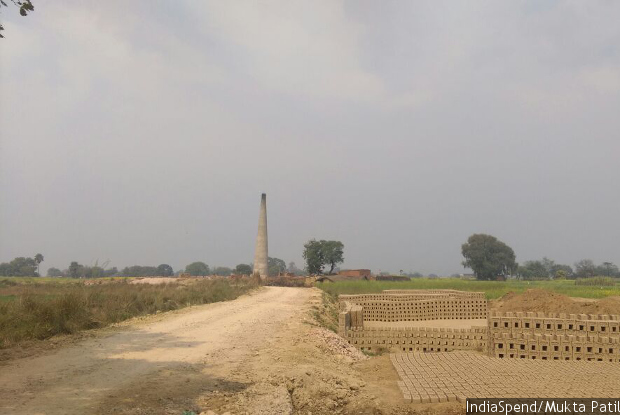 Bricks are laid out near a coal-fired brick kiln, 15 km north of Varanasi, Uttar Pradesh.

In May 2016, the Uttar Pradesh Pollution Control Board (UPPCB) directed all brick kilns to upgrade technology to reduce emissions, but the move met with protests.

“This industry is an important source of employment, and it requires good policy interventions and sensitivity by the government to upgrade these kilns and reduce pollution caused by them,” said Maithel.

Lack of monitoring and reliable data worsen the problem

The UPPCB does not provide live monitoring of air quality, and its website, when we checked, was last updated in December 2016.

The CPCB has online monitoring stations in four UP cities: Agra, Lucknow, Kanpur and Varanasi.

Neither the sole monitoring stations in Agra and Kanpur, nor the three in Lucknow show PM 10 levels. Only one of three CPCB monitors in Varanasi can measure PM 2.5--fine particles that can penetrate the lungs, levels of which are the leading marker of air quality--and none provide an air-quality index (AQI), a composite marker of various pollutants, as IndiaSpend reported on December 12, 2016.

“Year-round monitoring is ideal so that seasonal variations can be seen in the data,” Madineni said. “In the case of UP, the spread of the monitors also needs to be across the state so that we can observe air quality in rural areas as well as industrial belts.”