Why Small Farmers In Tamil Nadu Borrow Money At 60% Interest 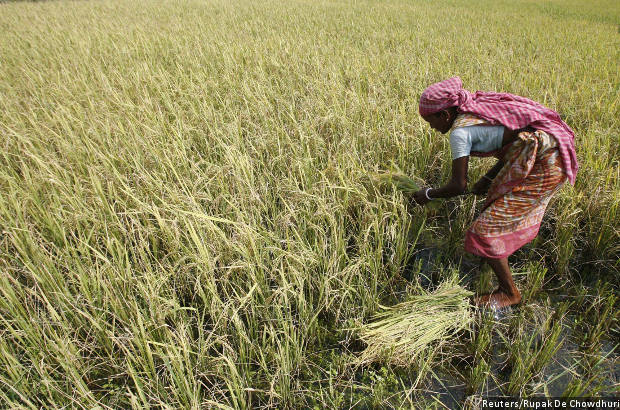 In October 2014 Karuppasamy (name changed), a farmer in Tamil Nadu’s western district of Pudukkottai, had no choice but to rent a pump-set to irrigate his farm when the rains were delayed and insufficient.

To pay for the pump, Karuppasamy took a loan from the local moneylender. He did not consider approaching a nearby bank because he had to get water to the fields within a very short window.

For millions of small and marginal farmers across Tamil Nadu, a state ravaged by the monsoon's growing vagaries, the story is the same. Their state is at the forefront of India’s financial-inclusion drive, but for Tamil Nadu's small and marginal farmers, agricultural credit from formal institutions remains notoriously hard to secure, as indeed it does in other states across India.

While credit flow to the agricultural sector increased, the share of small loans from formal institutions has steadily declined. The availability of timely credit from institutional sources appears to be the biggest challenge for farmers, according to the preliminary findings of an on-going study by the Institute for Financial Management and Research (IFMR LEAD), Evidence for Policy Design (EPoD) at the Harvard Kennedy School, and Duke University.

In addition to the decline in loans from formal institutions, uncertainties in rainfall and associated declines in yields have increased the risk faced by the small and marginal farmers, accentuating the reluctance of banks to lend to these communities.

A refined understanding of a farmer’s credit requirement across an agricultural season is thus vital, particularly in light of the recent reports of mounting farmer distress in parts of Tamil Nadu.

Borrowing from formal sources appears to be time-sensitive 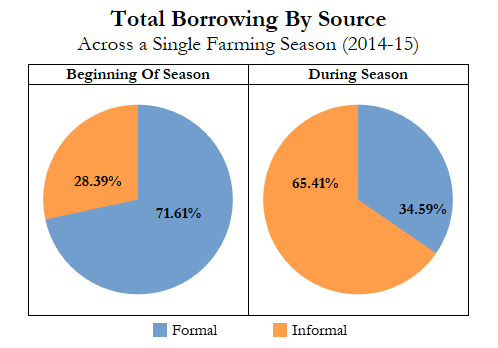 In general, we observe that more lending from formal sources is reported at the beginning of the season. This borrowing consists of credit availed from banks or other financial institutions. The picture changes once crops go into the ground. When we examine the borrowing behaviour during the course of the farming season, there is a very sharp decline in borrowing from formal sources.

A second round of surveying reveals that when uncertainty is high, formal loans might not be accessible or viable at all. In the 2015-16 season, when rains were very delayed, hardly any formal loans were taken.

While it is not clear whether banks were unwilling to give loans due to the weather conditions or farmers saw the commitment in formal loans as too risky, the implications of uncertainty on formal borrowing are worth exploring further.

Farmers often require credit at very short notice during a farming season. For instance, given the uncertainty in the arrival of rains in the 2014-15 cropping season in the delta districts of Tamil Nadu, even a slight delay in rainfall would have been enough to prompt farmers to rent a pump-set for irrigation.

In such a situation where unforeseen expenses are necessary, it would be most convenient for farmers, especially small and marginal holders, to borrow from informal sources, given the speed and convenience in getting these funds and despite an average annualised interest rate of at least 60% (according to an on-going survey of the informal lending market in the same areas, by the same team of researchers).

While larger loans are often taken by farmers pre-season, the potential losses of not being able to access credit during the season are the highest. This means that failure to get loans could adversely affect harvests, creating, for the farmer, a situation potentially more damaging than not having farmed at all.

Further analysis is required to draw firm conclusions. However, our preliminary findings suggest that farmers are willing to borrow from formal sources, but appear to be unable to do so at crucial times.

As many as 66% of the farmers we surveyed reported having taken at least one loan, with the primary purpose of meeting farming expenses; 77% of all such loans were from an informal source. 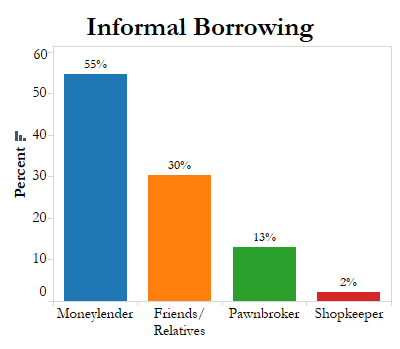 Nearly 68% of all informal loans came from either moneylenders or pawnbrokers. Only 30% was from friends, neighbours and relatives.

The level of indebtedness among the farmers we surveyed is high, with 95% of informal loans outstanding. These observations reiterate the findings of a National Bank for Agriculture and Rural Development (NABARD) study on the finances of agricultural households, conducted using National Sample Survey Organisation (NSSO) data (70th round), that the importance of non-institutional sources has not declined over the last decade.

Marginal farmers continue to remain the largest borrowers of loans from informal sources among all categories, a troubling observation, given the recent and ongoing efforts to bridge last mile gaps between formal institutions and the most financially excluded.

Up to 82% of the agricultural loans taken by marginal farmers in our sample were from informal sources; this number drops to 46% for farmers with medium-sized landholdings. 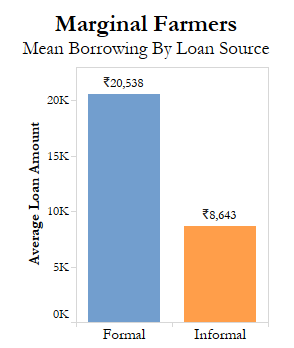 The average loan taken by a marginal farmer in our sample from an informal source is Rs 8,643. Farmers are not required to provide any collateral for loans up to Rs 100,000, a policy intended to allow easy access to credit.

Higher interest rates of informal loans are offset by the ability of informal lenders to provide funds at very short notice, the lack of collateral and document requirements, and, most importantly, doorstep delivery of credit and collection of repayment.

In comparison, a regular crop loan from a nationalised bank can take up to two weeks.

These findings are substantiated by additional data collected for this sample, which shows that distance from formal sources of finance, lack of information, and (most worryingly), a lack of interest in interacting with formal institutions are important factors that determine farmers’ preference for informal sources.

So, improving access to formal institutions in the vicinity may not increase uptake of loans by farmers. Bridging this last mile gap in access and use of institutional credit requires concerted focus from policy makers and bankers.

Looking ahead: Give loans when farmers need them

The persistence of informal lending is a warning sign that formal sources of credit are not meeting the needs of farmers, particularly those of small and marginal holders.

While lending to agriculture and allied activities is an important component of the Reserve Bank of India’s (RBI) priority sector lending norms, the implementation of current norms can be considerably strengthened.

For instance, most agricultural loans that the law requires banks to make are disbursed in the last quarter of the financial year. This defeats the purpose of priority sector lending, as disbursement is not always aligned with cropping seasons.

Recent revisions in priority sector norms have tried to address these anomalies by requiring banks to monitor such loans each quarter instead of each year.

These are welcome steps, but much more can be done. Banks and other financial institutions must make farmers more aware of their products and design products that low-ticket borrowers (Rs 10,000 and below) can use. An increase in credit to the agricultural sector needs to be accompanied by credit systems that can reach the neediest farmers. Only then can we expect ‘more from less’ out of the agricultural sector.

All data were collected as part of a long-term impact evaluation of the Kshetriya Gramin Financial Services (KGFS) portfolio, a financial services delivery model promoted by IFMR Trust, to ensure that individuals and enterprise have complete access to financial services. The sample features 353 farming households in Ariyalur and Pudukkottai districts across the entire Samba/Thaladi rice-growing season of 2014-2015 (September to March). The second phase of the study is ongoing–on a larger sample of farmers during the 2015-16 Samba/ Thaladi rice-growing season. Results are forthcoming.

(Nair is a Research Associate at IFMR LEAD, Chennai.)