Why Punjab Is India's Narcotic Haven 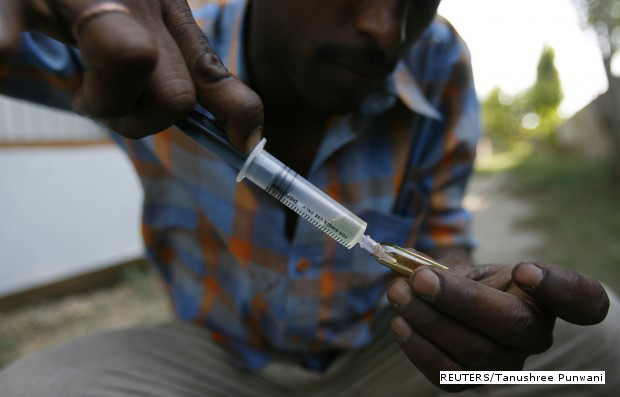 Prime Minister Narendra Modi, in his 'Mann Ki Baat' radio speech last month, envisaged the creation of a drug-free India. That is a challenging proposition that requires overcoming several obstacles,especially the state where narcotic abuse is the most serious: Punjab.

Referred to as the granary of India for its agricultural prosperity, Punjab is now besieged by a severe drug problem, which is now roiling its society, economy and politics.

Punjab accounted for almost half of all cases registered in India under the Narcotic Drugs and Psychotropic Substances Act (NDPS) in 2013, up from just 15% in 2009.

Punjab also accounted for a third of all undertrials and convictions under NDPS in 2013.

Various studies, including this one by Professor Ranvinder Singh Sandhu of Guru Nanak Dev University (who IndiaSpend had spoken to earlier), have identified a number of popular narcotics.

According to Professor Sandhu, the single biggest reason behind the drug problem in Punjab is the easy availability of narcotics in the state.

The growing popularity of brown sugar/smack/heroin can be attributed to Punjab’s close proximity to the Golden Crescent region covering Afghanistan, Pakistan and Iran. These three countries are, collectively, the world’s largest producers of opium.

Punjab shares a 553 km border with Pakistan, which is used as an entry point to smuggle narcotics into India. According to data tabled in the Rajya Sabha, in 2013, a total of 390 kg of smack/heroin was seized in various states along the Indo-Pak border by the Border Security Force (BSF). Almost 84% of these seizures were made in the districts of Punjab bordering Pakistan.

Furthermore, Punjab accounted for half of all seizures in India, according to a 2013 Narcotics Control Bureau (NCB) report.

A study by Sakshi Sawhney, a former research associate with the Delhi Policy group, also found that Punjab acts as a major transit hub for heroin in India. Sawhney further states that ‘Bhukki’, one of the most commonly-consumed drugs in Punjab, is sourced from the opium fields in Rajasthan and Madhya Pradesh.

While most of the opium production in these states is legal and supervised by Central Bureau of Narcotics, illicit, pure and adulterated opium still continues to be trafficked into bordering Punjab.

According to NCB data, in 2013, 41% (of 964 kg) of all opium seizures in India took place in Punjab, a sign of the drug’s popularity in the state. A large number of drugs are subsequently sold to users by an extensive network of dealers.

Besides dealers, one of the biggest sources of drugs in Punjab is local chemists, who sell over-the-counter prescription drugs.

Professor Sandhu’s study found that 45.83% addicts purchased these drugs from chemist shops making them the primary suppliers. Growing demand and profitability in the drug trade has led to a slew of chemist shops cropping up all over Punjab.

A considerable number of these shops, especially in rural areas, are unlicensed and sell drugs to users without prescriptions.

Another matter of concern is the involvement of high-profile government officials in the drug trade, including allegedly Punjab’s revenue minister and member of ruling Shiromani Akali Dal (SAD) Bikram Singh Majithia and state chief parliamentary secretary Avinash Chander in what is being described as a Rs 6,000 crore drug racket. This may indicate political patronage of the drug industry.

Youth unemployment, too, is an important reason for the growth in drug trafficking and use in Punjab.

According to data released by the Ministry of Labour and Employment in 2013, 13.5% of those in the age group 15-29 are unemployed, the third-highest rate in north-Indian states. While this is only slightly higher than the 13.3% national average, easy availability of narcotics in Punjab make the unemployed more susceptible to drug use and addiction.

The severity of Punjab's problem has even turned into a cold war of sorts between the SAD and Bharatiya Janata Party (BJP), the coalition partners of Punjab’s government.

The SAD held dharnas (peaceful agitations) on January 5, 2015 in areas bordering Pakistan to build pressure on the central government-controlled BSF to curb trafficked drugs. This also comes just ahead of the proposed visit of senior BJP president Amit Shah to the state on January 14, 2015 to launch the party’s anti-drug campaign.